The outlook just got worse for the world’s most endangered tuna. A new assessment shows that the Pacific bluefin tuna population, estimated a few years ago to have declined by 96.4 percent from its historic, unfished size, has continued to drop.

The latest stock assessment, released April 18 by the International Scientific Committee for Tuna and Tuna-like Species in the North Pacific Ocean (ISC), shows that overfishing has now driven the stock down by 97.4 percent. To put it another way, the Pacific bluefin population is just 2.6 percent of its original size. Adding to the bad news, projections show that unless fishery managers take swift action, Pacific bluefin has less than a 1 percent chance of rebuilding to healthy levels within two decades.

For nearly a century, fishermen targeted Pacific bluefin tuna without restrictions. The population fell steadily as nets pulled tens of thousands of tons of fish from the ocean each year, including many too young to have reproduced. However, it wasn’t until scientists published the first publicly available stock assessment in 2012 that the world got a sense of the decline. In that report is a table that shows the population was, at that time, 3.6 percent of its unfished level. Since then, pressure has mounted on fishery managers to act decisively to stop the decline of the stock and start rebuilding it. Still, despite new limits, including halving of catch in the eastern Pacific Ocean, the measures put in place in the western Pacific have allowed several countries to increase their catch. 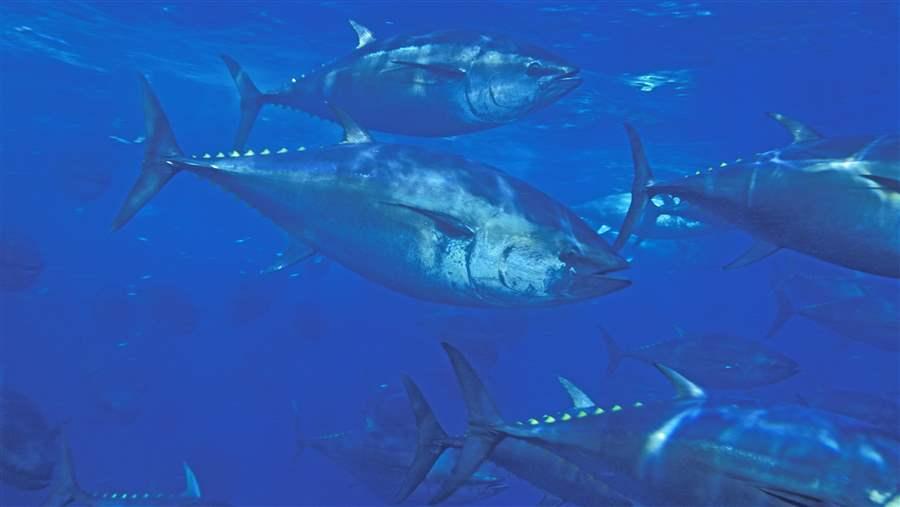 International fishery managers must re-evaluate their approach when it comes to Pacific bluefin.

Without significant action, the future for these tuna will be dire. Current management measures will fail to meet the already inadequate initial rebuilding plan agreed to by fishing nations last year. That plan aims to rebuild the population to just 6.4 percent of unfished levels by 2024. Even with a 20 percent reduction in catch, there would be less than a 35 percent chance of attaining a healthy population within 20 years.

International fishery managers must re-evaluate their approach when it comes to Pacific bluefin. It is time for science-based catch limits that immediately end overfishing, along with a commitment to implementing a recovery plan that returns the population to at least 25 percent of its historic size by 2025. Further, managers must look to the future and begin the process for agreeing on long-term management goals and policies.

Without immediate management changes, the Pacific bluefin tuna population may not survive. If international fishery managers are not motivated by the results of the latest assessment, it may be time to consider other measures, including international trade bans or a moratorium on fishing until the population can recover. Action to protect Pacific bluefin is overdue, and the world must take note before it is too late.