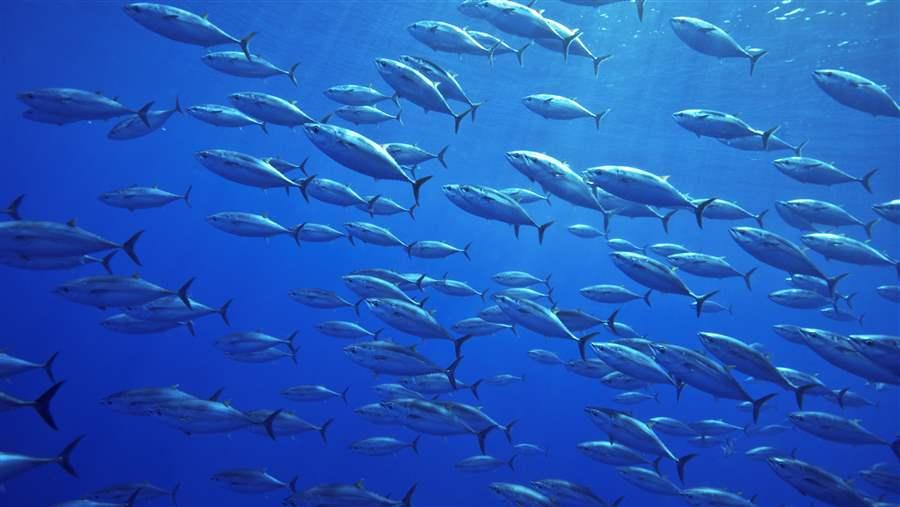 The long-term outlook for Bluefin tuna requires all stakeholders to play an active role in implementing policies to recover population levels.

If big problems call for even bigger solutions, the challenges facing the world’s three species of bluefin tuna require one more thing: a commitment by managers and fishermen to implement policies that help the ocean’s largest and most valuable tunas recover to healthy population levels.

In January, nearly 200 policy, scientific, conservation, and industry leaders from a dozen countries took part in a first-of-its-kind conference at the Monterey Bay Aquarium in California. During the three-day Bluefin Futures Symposium, experts discussed emerging science, management challenges, and the future of these fish in a changing world.

Although the ongoing problems of overfishing and illegal trade could not be solved immediately, participants expressed optimism that the technologies and scientific expertise needed to conserve and better manage bluefin populations are within reach—and that success is attainable.

The health of bluefin tuna varies by species, but all need a break from old ways of management. The Pacific bluefin population is at just 4 percent of historic levels, and greater action is clearly needed to reduce the amount of tuna being caught. Still, fishery managers have not yet shown the political will to put this population on a path to recovery. Atlantic bluefin are doing better, but the populations have not recovered fully, and pressure is now growing to catch more than scientists advise. Although managers have made strides to stem overfishing of southern bluefin, which are found in the southern Pacific, the population still faces threats.

Managers have already started developing harvest strategy processes in the Atlantic and Pacific. These strategies include pre-agreed-upon frameworks for fisheries management decisions, as opposed to the current process, which is characterized by yearly negotiations and political wrangling. For these frameworks to be successful, fishery managers first must agree on clear management objectives. These lead to development of potential management tools and rules that can be tested for effectiveness. It is then up to fishery managers to agree on implementing the rules that have been shown to have the highest probability of reaching the stated goals.

Illegal fishing is a direct threat to the health of all tuna stocks. Using technology to track catches and trades can help to close loopholes in current procedures that that allow illicit fish to enter the market.

Fishery managers recently agreed to mandate the use of an electronic catch documentation system for Atlantic bluefin that is scheduled to be in place by midyear. It will replace an outdated, paper-based tracking system and eliminate some of the gaps that have made it harder to stem widespread illegal fishing and trade of Atlantic bluefin. If done right, this tracking system could become a gold standard.

We are moving closer to a day when all bluefin populations will be fished responsibly and managers will use the most modern techniques available, but there’s a long road ahead. Success will require that all stakeholders—including reluctant governments and industry players—embrace emerging scientific techniques, recognize the deficiencies in current management, and treat the recovery of all three species as an urgent priority.