On Dec. 1, The Pew Charitable Trusts released a report, “Reducing Budget Risks: Using Data and Design to Make State Tax Incentives More Predictable,” that describes the difficulties state governments have had anticipating the costs of economic development tax incentives. In many cases, the costs of specific incentive programs have increased quickly and unexpectedly, by tens or hundreds of millions of dollars. When that happens, states risk out-of-balance budgets, forcing policymakers to face difficult choices between raising taxes and cutting spending.

One state that has dealt with this challenge is Michigan. In 2011, officials estimated the state had committed to providing $4.9 billion under the Michigan Economic Growth Authority (MEGA) tax credit program. By 2014, the state estimated the MEGA liability at $6.5 billion. A few months later, the estimate had increased by another $3 billion. 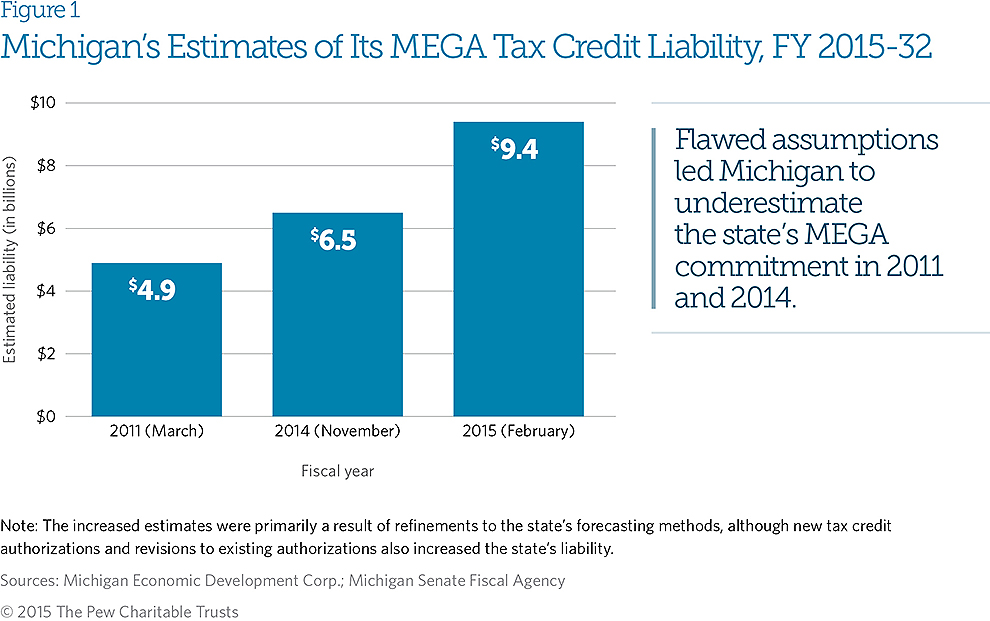 These numbers were not rising primarily because the state was offering more MEGA tax credits to businesses. In fact, MEGA was closed to new companies at the end of 2011. Instead, the estimates were flawed from the beginning. The state badly underestimated the number of jobs participating companies would create and the salaries they would pay, in part because of faulty wage growth assumptions. Michigan had entered into long-term agreements to provide incentives without an accurate picture of what they would cost.

“Reducing Budget Risks” describes ways states can make the costs of their incentives more predictable, so officials can have confidence they will not cause future budget challenges. The report also highlights the progress some states are beginning to make in this area. That group includes Michigan, where the Legislature is working with executive branch agencies to develop better forecasts in the hopes of avoiding unpleasant surprises in the future.