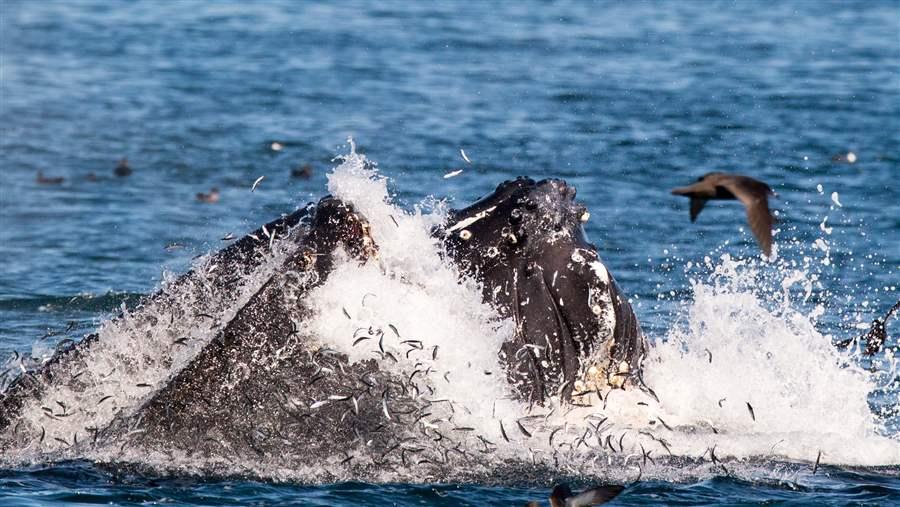 Anchovies are clustering in Monterey Bay and other near-shore areas, creating a feeding frenzy for humpback whales and other ocean wildlife.

Update: This article was originally posted on Pew’s website on Nov. 12, 2015. A few days later, the National Oceanic and Atmospheric Administration’s Fisheries Service agreed to conduct a new stock assessment on California anchovies by November 2016. That action is reflected in the text below.

Over the past few months, onlookers have flocked to California’s Monterey Bay to watch humpback whales gorge on thick schools of anchovies. Dolphins, seabirds, and bigger fish also congregated in the bay to feed on the large concentration of anchovies clustering near shore.

It seems to be the very picture of a healthy ocean, right?

In fact, leading scientists from California’s Farallon Institute tell us it’s a mirage. Farallon Institute senior scientist Bill Sydeman, one of the authors of new research on the state of California’s anchovy population, contends that what we’re seeing close to shore in places such as Monterey Bay is the vestige of a population that has declined precipitously in recent years. Anchovies have been driven close to shore by unusually high ocean temperatures, Sydeman says, and the fish tend to bunch together when their overall numbers are low.

Meanwhile, fishery managers may be unwittingly allowing a remnant population of California anchovies—a forage fish that is a critical food source for ocean wildlife—to be fished to such a low point that it could take years or even decades to recover.

That’s why The Pew Charitable Trusts joined four other conservation organizations Oct. 16 in asking federal fishery managers to update the stock assessment for the California anchovy population, which has not been officially assessed since 1995. (Most important species in U.S. waters are assessed every year.)

We also encouraged managers to consider interim measures to reduce fishing pressure on anchovies, which intensified in April when federal fishery managers ordered a shutdown of sardine fishing in the waters off California, Oregon, and Washington for the first time in 30 years.

Following the presentation of the new research revealing the uncertain state of anchovies, federal scientists decided to conduct a new official stock assessment on the California anchovy population by November 2016. We will closely track this process and, further, will work to ensure that fishery managers account for the critical ecological role of anchovies when they establish catch limits based on the results of the new stock assessment.

Fishery managers haven’t paid much attention to anchovies in recent years because commercial fishing of forage fish has mainly focused on sardines—or at least it did until the West Coast sardine population collapsed. After the April closure, fishing pressure shifted toward anchovies. Unfortunately, it’s now becoming clear that the anchovy population isn’t any stronger than the sardine population.

The new research, co-authored by Sydeman and Alec MacCall, a respected retired federal scientist, indicates that the California anchovy population has declined from a total estimated biomass of 1 million tons a decade ago to as low as 20,000 tons today. That’s less than the current annual catch limit of 25,000 metric tons for the waters off California. Think about that: If the new research bears out, the current catch limit exceeds the entire subpopulation of northern anchovies along the California coast.

We should point out that fishing is not the cause of the anchovy decline. Anchovy populations can fluctuate dramatically with changes in ocean temperatures, and their numbers typically surge during predominantly cold-water cycles. The unusually warm water in the Pacific Ocean resulting from El Nino—combined with a more persistent “blob” of warm water stretching from the Gulf of Alaska to northeast of Japan—strongly suggests that anchovy numbers will remain low for the foreseeable future.

“This is coming as a bit of a surprise to [fishery] managers, but it shouldn’t,” Sydeman told us. “Right now, managers focus on assessing the stocks of fish species that are actively targeted by fishing fleets. Since anchovy has not been a prime target of fisheries, they were deemed to be not very important. But to the ecosystem, they may be one of the most important forage species.”

The stakes are high. Scientists say that anchovies are the single most important prey species for seabirds on the U.S. West Coast and rank first or second for many other major predators, including humpback whales, chinook salmon, dolphins, and sea lions. It’s not hard to see how the decline of anchovy could reverberate through the ocean’s food web.  Scientists are suggesting that the decline in anchovies and sardines is the reason that sea lion pups are starving and brown pelicans are failing to breed.

It makes sense for the National Oceanic and Atmospheric Administration’s Fisheries Service to update its official stock assessment of the California anchovy population so that fishery managers aren’t operating in the dark when they set catch limits. We should do everything we can to protect this ecologically crucial species of forage fish.

New research suggests that the population of California anchovies&mdash;a critical food source for ocean wildlife such as whales, salmon, brown pelicans, and sea lions&mdash;has dwindled to levels not seen since the early 1950s. The research, funded in part by Pew, was conducted by scientists with the Farallon Institute for Advanced Ecosystem Research in Petaluma, California. The study, currently in press with the journal&nbsp;Fisheries Research, was also recently submitted to the Pacific Fishery Management Council. It concludes, &ldquo;Although current annual catch levels of a few thousand tons are small by historical standards, current exploitation rates could be high given the low stock abundance, and should be taken under consideration by fishery managers.&rdquo;

On Oct. 16, The Pew Charitable Trusts joined four other organizations in calling on the Pacific Fishery Management Council to act to protect northern anchovies in light of new information strongly suggesting that the central subpopulation of this critical species has collapsed