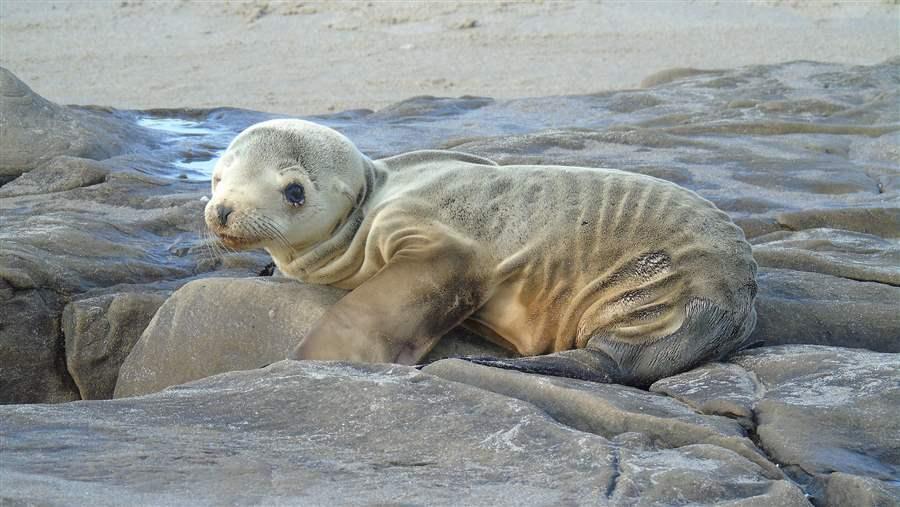 Here on the West Coast, sea lions evoke plenty of emotions. Some people love them, while others see them as a nuisance. Whatever your view, it’s unsettling to see hundreds of emaciated sea lion pups turning up along the California coast in what could be one of the worst stranding events on record. Such a dramatic event points to something out of balance in our ocean.

Although scientists need time to definitively determine the cause, the lack of Pacific sardines is clearly not helping matters. Sardines and other small fish, commonly referred to as forage fish, make up a large part of the sea lion’s diet. But this isn’t just a sea lion problem. When forage fish dwindle, their absence reverberates throughout the food web, affecting seabirds, other marine mammals, and bigger fish such as salmon that many of us enjoy catching and eating.

That’s why it’s important to do everything we can to conserve forage fish in the ocean.

West Coast fishery managers recognized the importance of forage fish on March 10 when the Pacific Fishery Management Council unanimously voted to prohibit fishing on dozens of forage fish species that aren’t yet being targeted. Council members deserve credit for acting with foresight.

However, one species of forage fish has been left behind in these protections: anchovies.

Anchovies are an important food for sea lions as well as other marine life. According to a 2013 scientific report by Pew, The State of the Science: Forage Fish in the California Current, anchovies’ wide distribution and year-round abundance make this forage fish species a highly important source of nutrition for more than 50 predator species. If you’re a fisherman, a bird-watcher, or simply someone who cares about a healthy Pacific marine environment, little fish such as anchovies are a big deal.

The most recent assessment of the central subpopulation of northern anchovies was completed in 1995, and a lot can change in two decades. When sardine populations decrease, scientists have generally seen that anchovies increase, but that does not appear to be happening now.

Populations of both sardines and anchovies appear to be low. All indications are that fishing won’t be allowed for sardines this year. But before commercial catch escalates on anchovies as an alternative to sardines, the National Oceanic and Atmospheric Administration’s Fisheries Service should update its assessment of the health of this important fish population.

So when you see graphic images of starving sea lion pups, remember that it’s a sign of larger problems with ocean health.