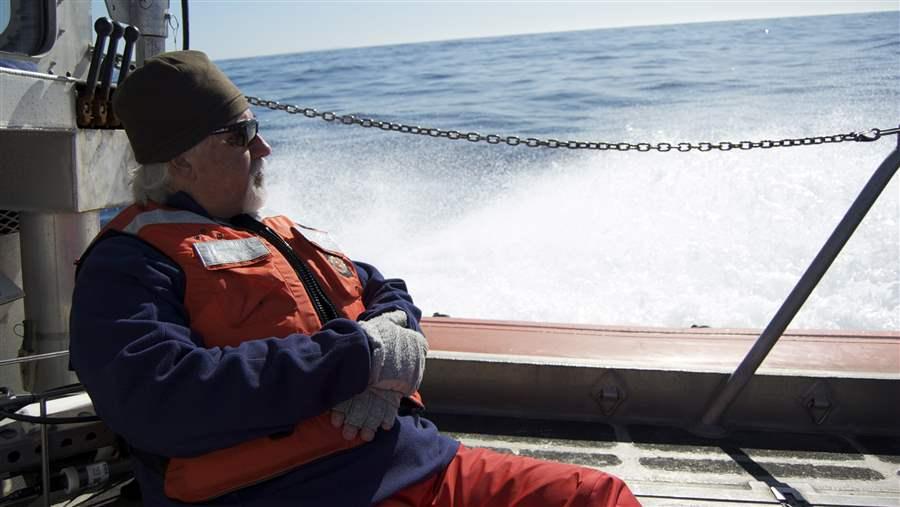 Bill Sydeman, founder and president of the Farallon Institute in California, recently documented how anchovy populations along the U.S. West Coast have dwindled to levels not seen since the 1950s. Anchovies are a crucial food source for a wide array of fish and wildlife on the Pacific coast.

Few people know more about the ecosystem off the West Coast of the United States than Bill Sydeman, a veteran scientist who founded the Farallon Institute for Advanced Ecosystem Research in Petaluma, California. Sydeman first gained an appreciation for the marine environment as a youngster fishing in Long Island Sound near New York City and later as a surfer when his family moved to Southern California.

His understanding of wind and waves and the life underneath the sea set him on a path that has taken him around the world as a leading marine scientist. He started his career with the Point Reyes Bird Observatory in the early 1980s, researching seabirds, and went on to author hundreds of peer-reviewed papers examining the effects of climatic patterns on the productivity of marine ecosystems, mainly in the North Pacific. He has served as a scientific adviser on several national and international fishery management councils and has been quoted widely in media outlets such as the Los Angeles Times.

Sydeman’s work focuses on major changes in the marine ecosystem along the U.S. West Coast that are rippling through the ocean food web.

Q: What is going on with the California Current ecosystem right now?

A:  The environmental conditions are extremely unusual. We went through a period of colder and windier conditions starting in about 1990 through 2013. Since then, things have gotten a lot warmer. Part of that warming is related to what’s being called the North Pacific blob, a pool of warm water that stretches from the Gulf of Alaska to the western subarctic gyre northeast of Japan. The water there is 3 to 4 degrees warmer than the long-term average. Now, on top of that, an El Nino (a cyclical pattern of relatively warm water every few years that begins off Ecuador and Peru and spreads north) has developed in the eastern Pacific. The California Current is sandwiched between and over the past year or so has become extremely warm, as much as 4 degrees Celsius (7.2 Fahrenheit) above average. It’s a novel climate state in the North Pacific.

Q: Is this warming related to global climate change?

A: Changes caused by carbon loading in the atmosphere would be measured over scales of decades, so we can’t directly attribute the blob to climate change. But we can say the conditions are consistent with global warming. To my knowledge, we have never before seen a North Pacific warming occur at exactly the same time as a central Pacific warming. This is something that global climate models have predicted: We’re going to see things that we’ve never seen before.

Q: How does this affect marine life?

A: We’re seeing a big decline in forage fish like anchovies and sardines. These fish can form the majority of the diet of many predators like seabirds, marine mammals, and bigger fish such as salmon, hake, and halibut. We’ve seen poor reproduction of brown pelicans off of Southern California, unusual mortality events for California sea lions, and a remnant population of anchovy concentrating in Monterey Bay and being eaten by humpback whales that have come close to shore.

A: Starting in the late 2000s, there was an apparent decrease in both the spawning and survival of eggs. As of about 2008 to 2009, there was a population collapse. Right now, we’re looking at a population estimate of northern anchovy off Southern California at a level we haven’t seen since the early 1950s—around 20,000 metric tons of total biomass. That's a very small amount of fish.

Q: If they’re so scarce, why do there seem to be so many of them in places like Monterey Bay?

A: You’re seeing remnants of the population that are left in very nearshore coastal environments, where they form very dense schools in small areas. That’s what the fishing is targeting at the moment in Monterey Bay. The whales in the bay are highly visible, but it would be a mistake to extrapolate this very local concentrated population to everywhere off California. Anchovy become concentrated when they’re scarce, so whale foraging seems to indicate an abundance of the fish, but it’s a mirage.

Q: What should resource managers focus on in light of the decline in sardines and anchovies?

A: One of the things that you want to do is manage anchovy as part of a suite of forage species that are important for the health of the whole ecosystem. A new study that I was involved with is the first research in 20 years to look at the overall biomass of anchovy off California. This is coming as a bit of a surprise to managers, but it shouldn’t. Right now, managers focus on assessing the stocks of fish species that are actively targeted by fishing fleets. Since anchovy has not been a prime target of fisheries, they were deemed to be not very important. But to the ecosystem, they may be one of the most important forage species.