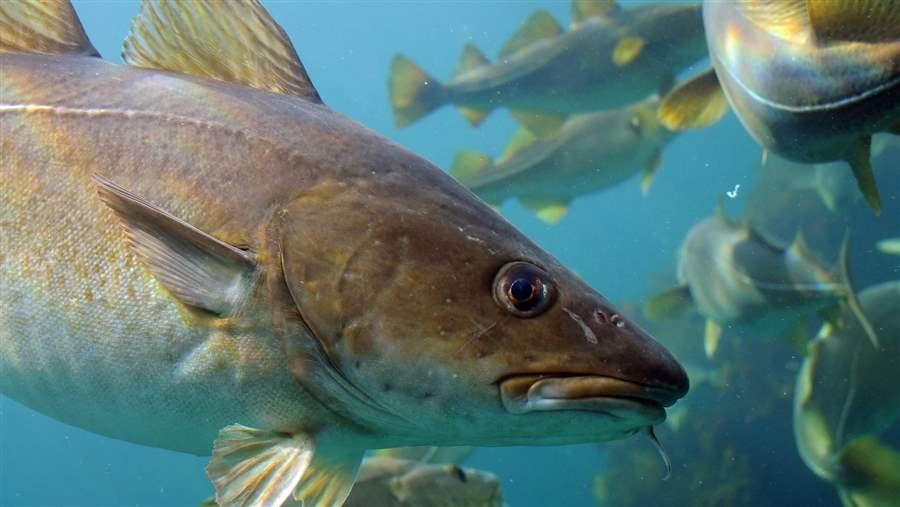 A recent study connecting the unprecedented warming of waters in the Gulf of Maine with the historic collapse of New England’s Atlantic cod population grabbed headlines around the country, and rightly so. This important work, published in the journal Science, adds to our understanding of how warming affects the health of some ocean animals and points to ways that we can help marine life cope in a changing climate.

Scientists at the Gulf of Maine Research Institute—with support from the Lenfest Ocean Program, which is managed by The Pew Charitable Trusts—showed that over the past 30 years the Gulf of Maine warmed at a rate three times faster than the rest of the world’s oceans. Even more alarming, sea temperatures in the gulf from 2004 to 2013 rose faster than almost anywhere else on the globe, a spike that the study’s authors characterized as “warming that few marine ecosystems have encountered.”

Cod are cold-water fish, and the study shows that warmer waters reduce the chances of young fish surviving to adulthood. Importantly, the waters have been heating up against a backdrop of historic overfishing that had already left cod severely depleted. The population’s ability to recover was impaired as sea temperatures rose. Stony Brook University professor Janet Nye, a study co-author, told The New York Times that when a fish population crashes, “we often wonder if it’s fishing or climate, but [in this case] it’s both.”

This study shows that we need a 21st-century approach to managing fishing to ensure sufficient fish populations in the face of ocean warming. We need to make decisions with the entire ecosystem in mind, which includes protecting the ocean habitat on which cod and many other fish depend.

Fortunately, such a big picture approach exists. It’s called ecosystem-based fishery management, or EBFM, and it can help officials take warming waters and other environmental changes into account when setting catch limits. The outdated system now in use simply looks at one fish stock at a time and does not adequately address sea temperature changes or other factors that can influence the health of a species. New England’s fisheries officials have recently started work to adopt EBFM—and that’s a good move. This study clearly shows that their work should be accelerated.

A mounting body of evidence concludes that one of the best ways to help make fish populations resilient to the stresses caused by climate change is to protect the places where they reproduce, grow, and find food and shelter. Last December, 138 prominent scientists sent a letter to New England’s fisheries officials urging them to protect more of the habitat on which fish depend.

Unfortunately, the New England Fishery Management Council instead voted in June to strip protection from thousands of square miles of important habitat areas. I hope that federal officials—who by law have the final say on the matter—will follow the science and reject that risky proposal.

Our fish and fishermen will be better off if officials maintain the protections now in place on Georges Bank, where cod stocks are in a free fall, and act to permanently protect places that harbor some of the last remnants of large cod. Cashes Ledge in the Gulf of Maine is just such a place. Earlier work by the Gulf of Maine Research Institute shows that the limited protections around Cashes Ledge have worked to protect the older, larger cod that will be important to the reproductive recovery of the population.

A proposed national marine monument on Cashes Ledge would both enhance and make permanent the protection of this ecologically vital and fragile place in our waters.

The Science study and many others make it clear that climate change is already having profound effects on ocean life right here in New England. While we can't ignore the drivers of climate change, we can and should take sensible action, soon, to help natural systems adapt.