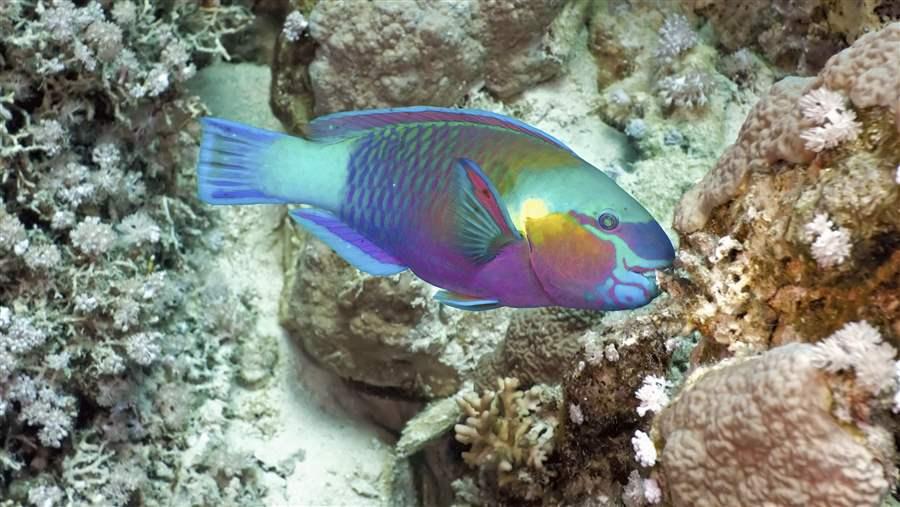 If you head to the U.S. Virgin Islands, you'll see conch for sale and fried parrotfish with a johnnycake flatbread at roadside stands on St. Croix.

On St. Thomas, you’ll discover the local seafood of choice is queen triggerfish, also known as ol’ wife for its rough skin, which, back in the day, people used to clean pots and pans.

Hop over to Puerto Rico, and the west coast fishermen are hauling in deep-water snappers that are rarely caught in the Virgin Islands.

Three different islands. Three different food experiences. Is it possible for U.S. Caribbean fishery managers to tailor fishing rules to the unique habits, culture, and seafood preferences of its diverse people and locations?

Some fishery leaders—and we at Pew—think so, because it presents a chance to take a more comprehensive approach to managing marine resources.

Currently, the Caribbean Fishery Management Council, composed of fishermen, local and federal government officials, scientists, and others, sets fish policies in the U.S. Virgin Islands and Puerto Rico by generally treating the locations as one unit. In some instances, the council does issue separate rules for the various locations.

But a new proposal from the council would more comprehensively devise fishing rules and management plans unique to each island. Under the proposal, St. Thomas would be joined with its smaller neighbor St. John.

The change would allow fishery managers to better account for the varied human influence at each island and how that puts different strains on the ecosystem. The proposal would factor in differences in fishing methods, what fishermen are catching, local economic demand, and cultural seafood preferences. The new management scheme would allow the right species to be managed in the right places.

Such a practice lays the foundation for improving fish rules even further toward ecosystem-based fisheries management. Instead of addressing one species at a time, this more comprehensive approach looks at the ecosystem as a whole. That means setting rules after considering the many factors that affect fish, including where they live, shelter, and spawn, what they eat, what eats them, and changing ocean conditions such as warming and more acidic waters. It’s a system that would also better account for human influences on the oceans.

We at Pew hope that Caribbean leaders and others around the U.S. will see the value in improved approaches to fishery management as Congress renews federal fish law.

Emphasizing this “big-picture” approach in the revised Magnuson Stevens Fishery Conservation and Management Act would help modernize the way we oversee our marine resources. The law is approaching its 40th anniversary and could use an update. In the Caribbean and elsewhere, it’s time for a new focus in fisheries management. Learn more at www.pewtrusts.org/healthyoceans.