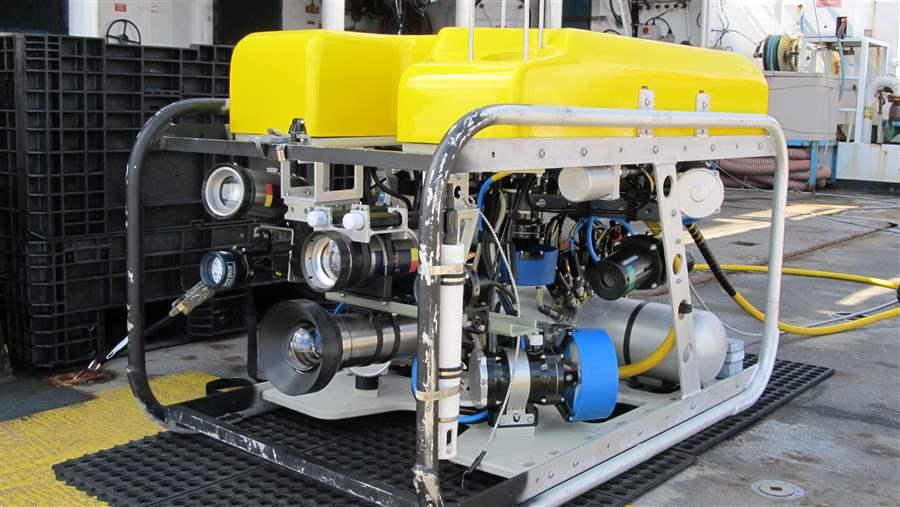 The Mohawk remotely operated vehicle is used by the University of North Carolina, Wilmington to videotape underwater life at marine protected areas in U.S. ocean waters off the southern Atlantic states.

Eight underwater safe zones for fish—places where fishing is restricted in order to protect important habitat where fish live—are scattered from North Carolina to Florida.

Now there’s a proposal to add areas for more targeted protections, specifically where deep-water snapper and grouper gather to spawn. The South Atlantic Fishery Management Council, which sets fish policies in federal waters from North Carolina to east Florida, is proposing “spawning special management zones” that could include up to 11 small areas, ranging from 1 to 15 square miles each. The proposal calls for a halt to bottom fishing in these spots, although fishing at the surface would still be permitted.

The designations—both existing and those under consideration—raise a few questions, including: How will anyone know if fish use the special breeding sites to actually reproduce? Is anybody keeping tabs on the approximately 600 square miles of existing habitat safe zones? Are protected areas helping fish populations thrive? The answers, in short, are that experts—and potentially fishermen themselves—will keep an eye on the new spawning sites much as they monitor existing protected areas, which they believe show promise for helping fish populations.

Experts say fish already favor the spawning spots, making protection of those areas vital to ensuring more generations of fish are available for fishermen to catch and seafood lovers to eat. Fishery managers are developing a plan to monitor what happens in any new areas designated as protected breeding grounds. The plan reportedly will include scientists working cooperatively with fishermen to gather evidence. The South Atlantic council is expected to vote the week of Sept. 14 on which of the 11 proposed sites to protect, with a final decision expected in December.

The plan for keeping an eye on any new spawning protection sites includes studies similar to those underway now in the existing habitat safe zones, known as marine protected areas or MPAs. Those areas host deep-dwelling species that have suffered population declines from overfishing. Scientists from the National Oceanic and Atmospheric Administration and the South Carolina Department of Natural Resources are studying fish in the marine protected areas.

NOAA employees monitor many of the MPAs with the help of a remote-controlled vehicle that shoots video 100 to 750 feet beneath the ocean’s surface. Researchers spend two weeks at sea each year collecting hundreds of hours of video inside and outside most of the eight protected areas in Georgia, Florida, South Carolina, and North Carolina. They drop the remotely operated vehicle, or ROV, overboard and observe fish behavior, habitat and other details. They identify and count every fish that comes into view to help figure out the density of fish populations and where they are located or moving.

The project started in 2004, five years before the MPAs were established in 2009. The work is therefore yielding valuable data from both before and after the protections took effect. With just six years’ worth of information since the MPAs went into effect, it’s still too early to draw conclusions about whether the protections have given fish populations a boost. That’s because many species live long and are late to reach sexual maturity, so it takes time to see changes in the generations.

But the videos have captured some important clues. For example, before the MPAs were established fishermen and researchers around a shipwreck off the North Carolina coast were reporting only rare sightings of snowy grouper, the result of heavily fishing the species for years. But by 2012, three years after the area was designated an MPA, videos show the area filled with big snowy grouper. Videos also have caught images of groups of fish, including upwards of 50 gray snappers and scamp plus smaller assemblages of snowy groupers that scientists suspect were gathering to spawn because the fish had changed color – which some species do when breeding.

Aside from shooting video, NOAA and the South Carolina Department of Natural Resources also catch fish in traps or on long lines draped over the seafloor. They catalogue the weight, age, size, reproductive status, eating habits, and other information about fish from all over the Southeast region, including some areas that lie within the MPAs.

These efforts are known as the Southeast Reef Fish Survey. Researchers put down about 1,500 fish traps in a year, catching more than 40,000 fish and taking hundreds of hours of video from cameras attached to the traps. They return many of the fish to the water alive after taking scientific samples and donate the rest to local food banks.

The scientists, who have produced in-depth studies on the health of fish populations throughout the Southeast region for decades, are analyzing whether the MPAs have improved conditions for the fish. They also are beginning to use genetic testing to help determine if populations are spreading out over wider areas.

But it will take more time to find definitive answers. It stands to reason that leaving fish undisturbed in the right places will increase the likelihood that they will reproduce and spread out over areas beyond their spawning sites. That will help build and maintain robust fish populations that can provide recreational opportunities, seafood and better fishing for generations to come.