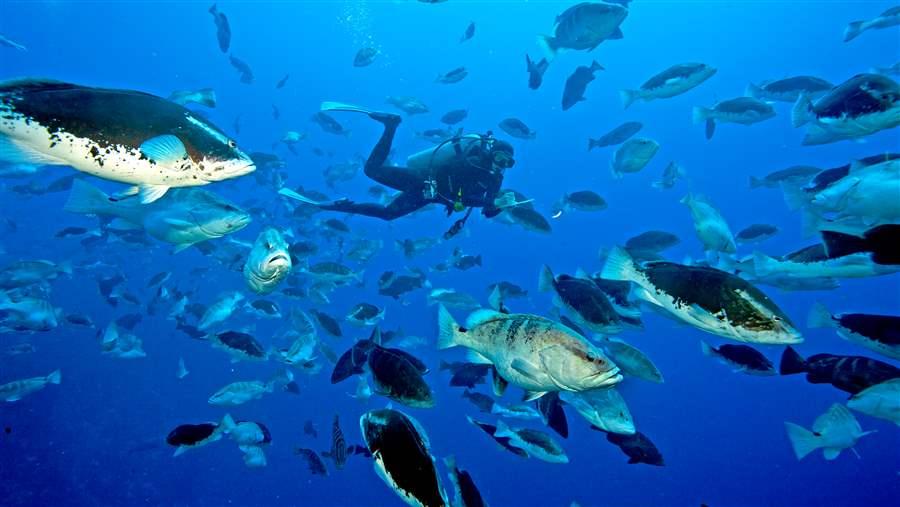 Some fish, like these Nassau groupers in the Cayman Islands, travel to their spawning places to reproduce. It is an event rarely caught on film.

An underwater mountain off Puerto Rico’s western coast is a mecca for diverse groups of breeding fish. Some make an epic journey, traveling hundreds of miles to get to Bajo de Sico. The flattened peak and its coral-rich slopes rise from the deep ocean floor to within human diving limits of 70 to 200 feet. The rich environment is home to threatened corals and hosts breeding humpback whales. And for many fish species, it’s akin to a romantic city that provides the perfect backdrop for courting.

Bajo de Sico exemplifies the many places worldwide that fish have chosen as spawning destinations—and some species return to the same spots for generations. Protecting these areas gives fish a safe haven when they need it most.

Caribbean fishery managers have restricted some fishing during spawning time at Bajo de Sico to aid the species that gather there, including the endangered Nassau grouper. The strategy already is working in another area in the Caribbean, near St. Thomas in the U.S. Virgin Islands. There, a year-round prohibition on all fishing at the Red Hind Bank Marine Conservation District is helping bring back the popular but once depleted red hind, which also groups together to reproduce.

Protecting places where fish gather to spawn boosts healthy fish populations and improves the recovery of declining ocean species. In some spawning areas where fishing has stopped, fish have grown larger and more numerous, and their populations have expanded over a wider area, replenishing nearby fishing grounds. Fish in these areas produce greater numbers of eggs, which are more likely to survive and hatch. This abundance attracts additional species, so food webs grow more robust.

For example, in one spawning area where resource managers have limited fishing, in the Dry Tortugas off the Florida Keys, some fish have done more than get bigger and more numerous. These populations also have expanded over a wider geographical area, spilling into nearby fishing grounds—thereby replenishing populations in places where the species may be legally caught. Ocean currents are transporting eggs away from this site and probably distributing new young fish to other parts of the region.

Habitat protections offer one tool that fishery policy leaders can use to broaden their approach to managing fish. Instead of emphasizing how many of each species can be caught, a more comprehensive approach considers existing scientific information about where fish live, what they eat, what eats them, and which other factors affect them. Integrating those data, and shifting to big-picture fisheries management, could help ensure that fish populations are sustainable both for the human communities that rely on them and for the future health of the oceans.

As Congress works toward renewing the key federal fisheries law, the Magnuson-Stevens Fishery Conservation and Management Act, it should embrace this big-picture method. The law is approaching its 40th anniversary, and it’s overdue for an update. It’s time for a new focus in fisheries management. Learn more at www.pewtrusts.org/healthyoceans.