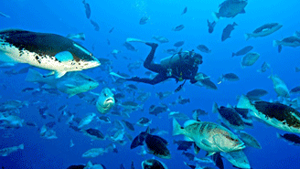 Some fish, like these Nassau groupers in the Cayman Islands, travel to their spawning places to reproduce. It is an event rarely caught on film.

SAN JUAN, Puerto Rico—I first get to know the producer of the film project that calls me to the Caribbean as we glide over the turquoise waters. I have joined Gary Strieker, an Emmy award-winning television correspondent who has worked all over the world, to shoot an episode of “This American Land” about the Bajo de Sico seamount, an underwater wildlife mecca off the western coast of Puerto Rico. The episode is set to air this summer on public TV stations.

Over the roar of the Cessna’s propellers, we talk about Bajo de Sico, the flattened peak and coral-rich slopes of the undersea mountain that rises from the deep ocean floor to within human diving limits of 70 to 200 feet.

We have come here to tell the story of a team of scientists working with fishermen to protect Bajo’s seamount habitat. Banning fishing during times when fish are reproducing could allow them to safely aggregate, spawn, and produce a larger number of offspring. Robust fish populations are essential for healthier ocean ecosystems that may be more resilient to threats such as climate change. Thriving ecosystems in turn support fishing and recreation, which power local economies. As a result, some limits on fishing may create more economic opportunities for everyone in the future.

Tomorrow we will dive at Bajo to see the unique place that these experts and Pew are working to save.

On the second day of our trip, I awaken with a head cold and fear that congestion will stop me from this long-awaited dive. I worry that I won’t be able to clear my ears to deal with the pressure changes that happen on deepwater dives. I power through a morning of planning and interviews with University of Puerto Rico scientists Michael Nemeth and Michelle Schärer, who study fish spawning aggregations. They believe they may have discovered the unexpected return to Bajo of the once plentiful but now internationally endangered Nassau grouper.

We set off in the afternoon for Rincón, a small fishing and surfing town in the northwestern part of the island. Locals call it “Gringolandia” because of the many Americans drawn there for the surf and laid-back lifestyle. We arrive, and as we rest on a bluff overlooking the sea, we spy whales spouting in the distance. It’s breeding time for the Atlantic humpback whale. It would be a dream come true to see them during our dive, but such contact is rare.

I’m still stuffed up when we reach the dive boat. The rebreather divers—who use specialized closed-circuit equipment to stay underwater longer—have already been there an hour preparing their gear.

It’s an hour’s journey to Bajo. The birder in me is excited by the prospect of spotting the brown and masked boobies rarely found on the mainland. When we arrive at the dive spot, the mood turns serious. We prepare for the dive, deep—90 to 170 feet—and dangerous.

As the rebreather divers get into the water first to complete research-related tasks on the seafloor, I get ready. I love the 10 minutes before hitting the water for a dive. Even after 17 years of struggling into a wetsuit, there’s nothing like the anticipation of the mystery that waits for me below.

Everchanging, yet ever the same. Storms, people, and time may alter the seascape, but in the tropics, marine life still plays a unique role in these complex ecosystems. The tiny cleaner shrimp still pick away parasites in a grouper’s mouth, and the ubiquitous damselfish still dart among the corals, defending their algae gardens.

I’m the first in my group to take the plunge, then Michelle, Roger Herr (the videographer), and lastly Francisco “Paco” Garcia-Huertas, our boat captain. 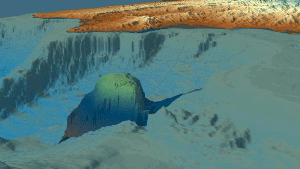 Bajo de Sico is an underwater mountain 18 miles west of Puerto Rico. It is shown in blue/green here on a bathymetric map, the equivalent of an above-water topographic map.

We descend slowly, and I hope it will give my ears time to adjust to the pressure. It works! Without problems I get to the bottom, which is covered in gently rolling coral hills and riven by channels. Surgeonfish cruise around in small schools. Parrotfish nibble on algae.

Triggerfish slowly flutter by. We can spend only 10 minutes at this depth. While the production crew busily records our surroundings, I focus on the quiet beauty of the underwater city that surrounds me: coral architecture and lush landscapes that should house abundant life.

Although Michelle and Michael’s research has shown that fish gather here for spawning, we don’t spot any today. They have dispersed since the last full moon. If this year is lucky enough to see a second spawning time—a “split spawn”—they may return during the next lunar cycle. Such infrequent opportunities for reproduction—and the slow population growth that results—exacerbate their vulnerability to overfishing and other threats. With very little chance of a baby boom, it is critical to conserve habitats such as Bajo.

After the dive and a simple lunch, we return to the water for a leisurely swim, using our snorkels to explore just below the surface. The waves make it hard to get our bearings, but the sea feels warm and relaxing now that we have taken off our cumbersome dive gear.

We are startled by the sound of a tail slap and a flash of white underwater: A humpback whale is in front of me! The animal floats by vertically with its head down and flukes hanging limply by its enormous head. Eyes closed, it is at rest in the water.

“Thank you,” I whisper. “Thank you for being here.” Whether it be luck or privilege or good karma, I share a full minute and a half with this sublime creature. I search for the words to describe what I feel in this moment: love, awe, gratitude, humility. I am not afraid, even though I am physically dwarfed by this enormous animal.

Too soon for me, the whale awakens, rights itself in the water, and seems to size up my three goggle-eyed companions and me. Then the leviathan gracefully swims away.

I break the surface in the whale’s wake. We are all elated, but the thrill is bittersweet. We know that Bajo is not what it used to be. We hope for what it could be once again.

Protecting the seamount is critical for life to rebuild here. Fish, corals, whales, and all marine animals need a haven in which to reproduce. I know now more than ever that safeguarding these areas is paramount. The brief moment with the humpback steels my resolve to work for the preservation of Bajo de Sico—an underwater home where vital sea life can safely feed, spawn, and rest.

If you want to experience the wonders and potential of Bajo de Sico, please tune in to “This American Land” to watch the episode Seamount of Life. Watch video of the Bajo seascape and hear fishermen, scientists, and advocates explain why this is a place worth saving. Check your local listings for dates and times.