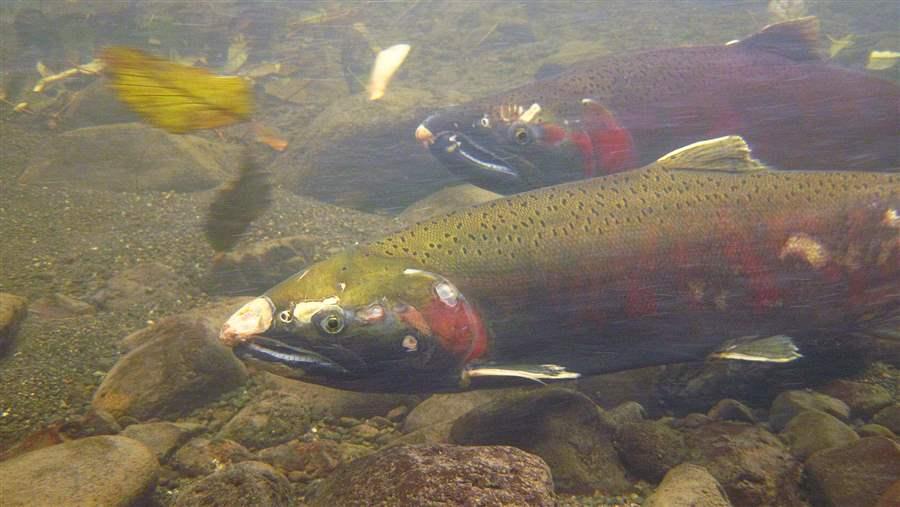 As soon as my rod bowed, I knew I had hooked a salmon.

I was fishing at the mouth of the Columbia River, a side trip from a work conference. Both that salmon on the end of my line and the conference—the 145th annual meeting of the American Fisheries Society—highlighted for me the value of a comprehensive approach to fishery management.

Salmon in the Pacific Northwest, as much as any species, are widely recognized for their close connection to the broader ecosystem. Salmon are predators that depend on forage fish such as sardines and anchovies in the ocean. They need clear, cold freshwater stream habitat to spawn, and they face the persistent threat of inadvertent capture in the nets of ocean fishermen targeting other species. They also are directly affected by large-scale shifts in ocean conditions brought about by a changing climate.

The conference, held Aug. 16 to 20 in Portland, included numerous presentations, among them a symposium organized by The Pew Charitable Trusts on efforts by scientists and resource managers to shift toward an ecosystem-based approach to setting catch limits and managing ocean fish.

Besides the coho salmon for my freezer, I brought home four major points from the meeting.

Climate change makes it imperative to see the big picture

The notorious warm-water “blob” roiling marine ecosystems off the U.S. West Coast is just one example of major climatic changes affecting marine ecosystems. On the other side of the country, the Gulf of Maine is also experiencing rapid warming. These events are increasingly forcing fishery managers to consider more than just species numbers when setting catch limits and making other management decisions.

As scientists learn more about the ocean—for example, through cutting-edge research on predator-prey relationships—fishery managers have a greater ability to identify trade-offs. With a comprehensive ecosystem-based management system, they can strike a better balance between the long-term health of the ecosystem and the economic needs of coastal communities.

Tim Essington, a University of Washington fisheries scientist who co-chairs the Lenfest Fishery Ecosystem Task Force, addressed an overflow crowd at the meeting (and, separately, a large public radio audience in Portland). He noted that while the concept of ecosystem-based fishery management dates to the 1800s and garners wide support in theory, many fishery managers have been slow to adopt it.

The Lenfest task force will provide a blueprint of practical measures that can be embraced by regional fishery managers across the country. “Ideally, we’re going to do this in a way that simplifies their process,” he said.

Jason Link, senior scientist for ecosystem management with the National Oceanic and Atmospheric Administration’s Fisheries Service, opened his presentation with an emphatic statement: NOAA Fisheries “needs to, can, and is committed to do ecosystem-based fishery management. If that wasn’t clear before, it should be now.”

In fact, Link estimated that federal fishery managers are already about 25 percent of the way toward a comprehensive, big picture approach to managing U.S. ocean fishing. NOAA Fisheries will soon begin encouraging more progress by measuring the consistent use of tools such as fishery ecosystem plans. Good examples include the landmark plan approved unanimously two years ago by the Pacific Fishery Management Council and annual ecosystem “report cards” put together by NOAA’s Alaska Fisheries Science Center. Ten years from now, Link said, managing with a big picture approach will be the norm across the country.

Many fishermen are already on board

Patrick Paquette, a charter boat captain and recreational fishing advocate from Massachusetts, spoke passionately about how he became involved in advocating for a big picture approach two decades ago. At the time, recreational fishermen and small-boat commercial fishermen began to notice industrial trawlers scooping up large quantities of river herring. Fishery managers focused on setting catch limits on each species in isolation, failing to account for how fishing for prey such as herring and menhaden could affect predators like striped bass, marine mammals, and seabirds.

“I come to you from the most conservative, stubborn, most difficult-to-manage fishery—that being New England,” he said. “And I can tell you that fishermen there have been asking for ecosystem-based fishery management for at least 20 years.”

Ben Martens, executive director of the Maine Coast Fishermen’s Association, concurred. “Fishermen aren’t the problem,” he said. “The problem is our managers, who have been doing something the same way for 20 or 30 years.”

Whether we enjoy catching a salmon along the Oregon coast or watching puffins nesting in Maine, all of us have a stake in healthy oceans. Making sure we manage fisheries with an eye on the big picture will help sustain both fish and fishermen for generations to come.

A Big-Picture Approach to Fisheries Management

U.S. fishery managers often focus on one species at a time when determining how, when, and where fishing takes place. But each fish population is part of an interconnected ecosystem in which they interact with other fish, ocean wildlife, and habitats.