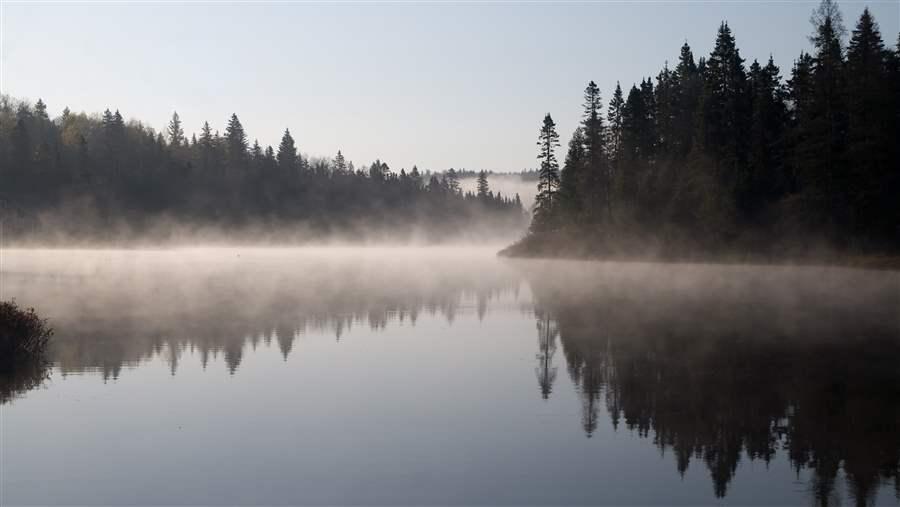 The province of Quebec has committed to protecting 50 percent of its boreal region.

Five hundred miles northeast of Montreal, surrounded by an intact wilderness of pine and spruce forest, an iconic boreal river runs wild. Undammed and unpolluted, the waters of the Broadback race 280 miles deep into the boreal region, over rapids and down waterfalls to the mouth of Rupert Bay. The Broadback River’s namesake watershed is an ecological gem, a refuge for threatened herds of woodland caribou and migratory birds such as the rusty blackbird and threatened Canada warbler. The watershed holds special importance for the Cree people—or Eeyou, as they call themselves—who have drawn sustenance from traditional hunting and trapping there for millennia. This area has been called the last frontier of intact forest within the Canadian province’s southern boreal region, where commercial logging is normally permitted.

Now it can also be called protected.

Under an agreement announced by the government of Quebec and the Grand Council of the Crees (Eeyou Istchee), more than 2.25 million acres within the Broadback River Valley—including one of Quebec’s largest freshwater lakes, Lake Evans—will be designated as protected areas and biodiversity reserves—the equivalent of more than a one-mile swath of land the width of the entire United States of America.

The measures cover some areas that had previously been proposed as reserves, but they also extend to more than 1.3 million acres of pristine forest and lakes that are newly designated conservation zones—an area larger than Grand Canyon National Park.

This is good news on several fronts.

The Quebec government has vowed to implement measures to restore the region’s woodland caribou, which have a better chance of prospering when their ranges are left undisturbed and connected. They are an indicator species of the broader health of the boreal ecosystem. Land use has significantly affected caribou populations in the southern boreal, so this action is necessary to ensure survival of those populations.

The agreement between Quebec and the Cree also represents an important step toward fulfilling the Canadian province’s landmark environmental commitment to protect half of its northern territories from industrial development while ensuring sustainable development on the remaining 50 percent. According to the provincial government, 11.6 percent of the territory covered under Quebec’s Plan Nord, the policy that sets its conservation benchmarks, is now protected.

Since it was first announced in 2011, the plan has been rightfully praised as groundbreaking in its approach to conservation of boreal forest and tundra areas.  Quebec made a commitment to protect almost 150 million acres north of the 49th parallel—an area about the size of France—from industrial activity. The International Union for Conservation of Nature has described the policy as “a guiding light to the globe as we combat the enormous global challenges of biodiversity loss and climate change” and “an outstanding and historic conservation policy that will positively reverberate around the world.”

Quebec Premier Philippe Couillard confirmed in April 2015 that the province intends to keep its commitment to meet the 50 percent conservation goal by 2035, including an interim goal of 20 percent protected by 2020.

Since April, the province has taken concrete steps to meet those targets. The new protections for the Broadback River watershed follow government actions to finalize the protection of 1.15 million acres in the Kovik River watershed and add 500,000 acres to the Ulittaniujalik National Park.

No one should underestimate the difficulty and complexity facing Quebec as it pursues its conservation goals. In order to succeed, the province must continue to work in partnership with the Indigenous peoples of the boreal region. Without their full participation and informed consent, the conservation vision set out in the Plan Nord cannot be realized.

It would be naive to suggest that the process will be easy, or free of controversy or missteps. By definition, the implementation of any visionary world-leading policy will be fraught with complications.  And it must always be remembered that Indigenous peoples are not one single unified entity. The Innu of Mashteuiatsh and the Cree community of Waswanipi in Quebec have voiced legitimate concerns about some aspects of the agreement that are worthy of redress.

But the partnership forged by the Quebec government and the Cree Nation marks progress. It offers hope that the process Quebec uses to implement the conservation and sustainable development goals of the Plan Nord will be refined and improved, over time and through experience, to address the lessons learned along the way.

That would be good news not only for the people of Quebec but for the health of the environment we all share.

Jacobson is an officer with Pew’s International Boreal Conservation Campaign.