When it comes to sharks, it’s not a bigger boat that you’ll need this summer, but a second TV!

But this year will bring a double dose of dorsal fins! 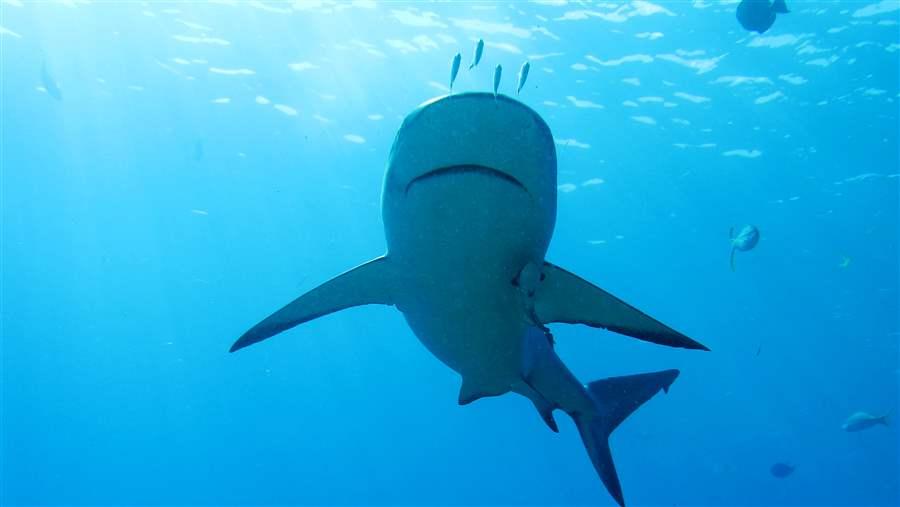 National Geographic Channel kicks off its SharkFest programming the same week. Be sure to tune in to watch several of Pew’s Shark Attack Survivors—Mike Coots, Debbie Salamone, Eric Larsen, and Jonathan Kathrein—featured in National Geographic’s “United Sharks of America.” The show premieres July 5 at 9 p.m. EDT.

The Pew Charitable Trusts’ global shark conservation campaign appreciates the platform that National Geographic and Discovery Channel provide to showcase how vital these animals are to keeping oceans healthy—and how endangered many shark species have become. Pew is working to preserve shark populations worldwide through habitat protection, catch and trade regulation, and reduction in demand for shark fins and other shark products.

It’s been an incredible year for shark protections. Check out the list of shark wins that have stacked up since last August. And take some time to learn some new shark facts that will change what you think about the ocean’s top predators, including details on the ways many shark species are more similar to mammals than fish.

A Year of Shark Conservation Wins

Despite being one of the oceans’ top predators, sharks remain vulnerable. Approximately 100 million sharks are killed every year in commercial fisheries. Their decline endangers entire ecosystems. The good news is that global shark conservation momentum has been building. We’re looking back on the biggest shark conservation gains since last summer.

8 Shark Facts That Will Change How You See Them

Sharks have been around for 400 million years, but there&rsquo;s much more to them than big teeth and &ldquo;Jaws.&rdquo; Consider these facts, which will change what you think about sharks.

The population growth of any species depends on its life-history characteristics. With many of the world&rsquo;s shark populations declining, it is important to examine how these characteristics differ from other fish to identify the most effective management approaches.