Fisheries managers for the Atlantic Coast states face an important decision May 5 about what’s sometimes called the most important fish in the sea: Atlantic menhaden. Officials could increase the allowable catch to appease the East Coast’s largest fishing industry. Or they could begin to manage this forage species in a way that protects fish, seabirds, and whales, as well as the interests of the people who care about and depend on those animals from Florida to Maine.

The Atlantic States Marine Fisheries Commission is under pressure from the menhaden fishing industry to raise the catch quota put in place in 2012. Some menhaden are used for bait, but roughly 80 percent of the catch is allocated to a single company that pulverizes and renders the fish into animal feed and oil. The industry points to signs of improvement in a menhaden stock assessment released in January as evidence to support an increase in the catch.

But menhaden matter as more than just ingredients in industrial products; they are an immensely valuable public resource. Schools of menhaden form a crucial part of the coastal food web as the fish gulp plankton, composed of tiny plants and animals, and turn it into fat and protein that other animals then consume. An array of wildlife, including striped bass, humpback whales, and ospreys, thrives when menhaden are plentiful and suffers when they are not.

Unfortunately, the proposals to increase the menhaden quota do not take into account the needs of these predators. Allowing hundreds of millions of menhaden to be taken from the ocean without understanding the ecological impact would be risky and could undermine conservation efforts for many species. There’s a safer way to proceed.

More than a decade ago, the commissioners set a goal to “protect and maintain the important ecological role Atlantic menhaden play along the coast.” Now they have the opportunity to do just that, by making sure the catch limit for 2015 also accounts for the menhaden that marine predators rely on. The commissioners could also initiate an amendment to their management plan for Atlantic menhaden in order to bring a modern, big-picture approach to future decisions about this fish and its place in the ocean food web.

Appropriately set population targets would make sure that those that prey on menhaden have plenty to eat. 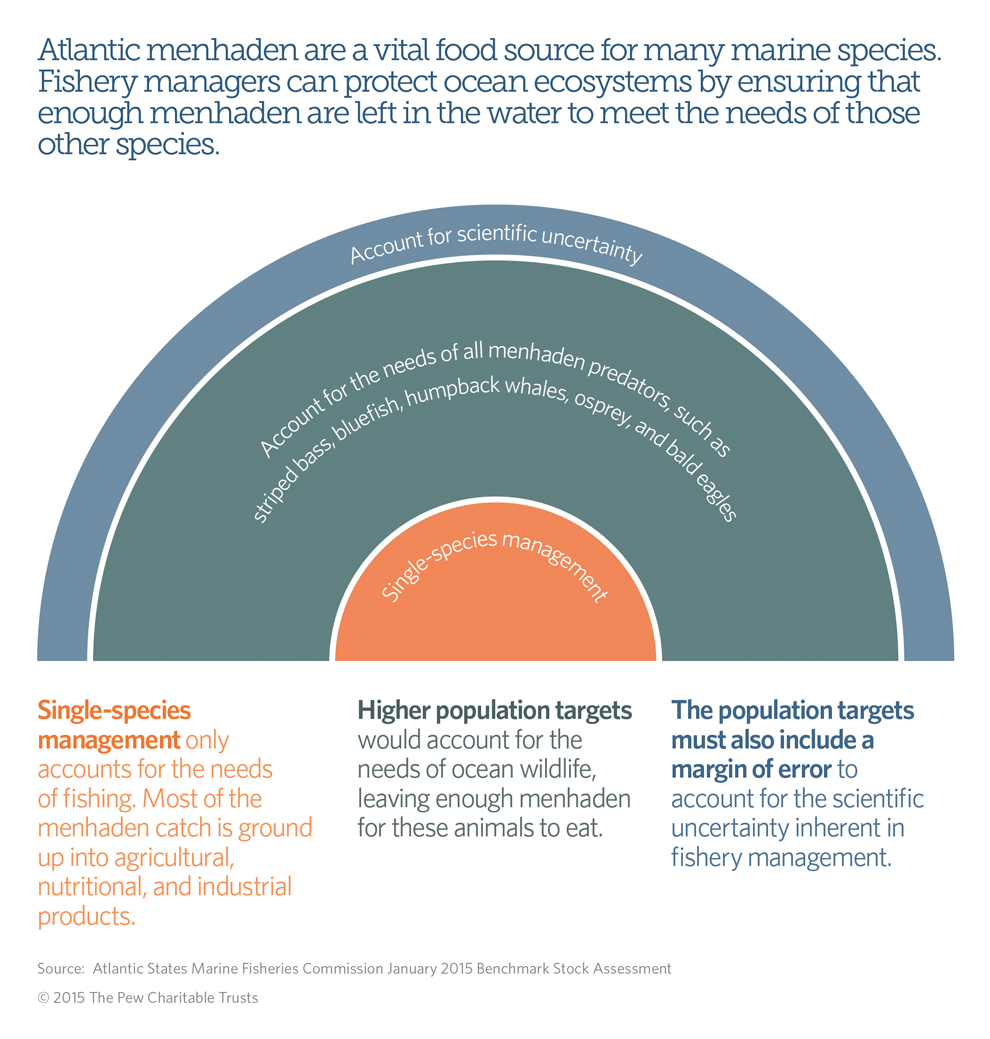 Although the most recent assessment of menhaden offered some good news, it raised concerns in other aspects. It indicated that the total biomass (the estimated combined weight of all fish) has increased, but also found that the actual abundance (the estimated number of fish) remains near historic lows. The menhaden population is still in need of conservation and has not recovered throughout its historic range from Maine to Florida.

The continuing lack of abundance is arguably more critical for predators such as striped bass, a fish that’s highly prized by anglers but declining in numbers. The commissioners recently made a difficult decision to reduce the striped bass catch in order to address this coast-wide problem. These and other important predator fish need abundant food if they are going to recover and thrive.

This gallery of images gives an idea of what we can expect to see when we realize an ample supply of menhaden in the water: humpback whales in New York’s waters, striped bass on fishermen’s lines, and ospreys and bald eagles feasting in bays. These are more than just pretty pictures. They are snapshots of a healthy ecosystem that supports coastal residents and businesses such as charter boat captains and ecotourism operators.

I hope the commissioners keep that vision of the future in mind when they vote May 5.

Atlantic menhaden are sometimes called &ldquo;the most important fish in the sea&rdquo; because so many animals depend on them for food. Here are just a few of those birds, fish, and marine mammals enjoying their favorite meal.