Peer review of the Atlantic States Marine Fisheries Commission’s 2015 Atlantic Menhaden Stock Assessment is now complete. As expected, it shows the biomass (weight of fish) increasing after a steep decline, apparently driven by an increase in larger, heavier fish. However, the abundance (number of fish in the water) remains well below historic levels. The report’s authors “strongly encourage” an ecosystem approach to setting catch limits that ensure a food supply for ocean predators. Such a system would recognize menhaden as a fish “both valued commercially in its own right, and as an important prey species.” The commission’s Menhaden Management Board will review and consider the document during its Feb. 3 to 5 winter meeting. 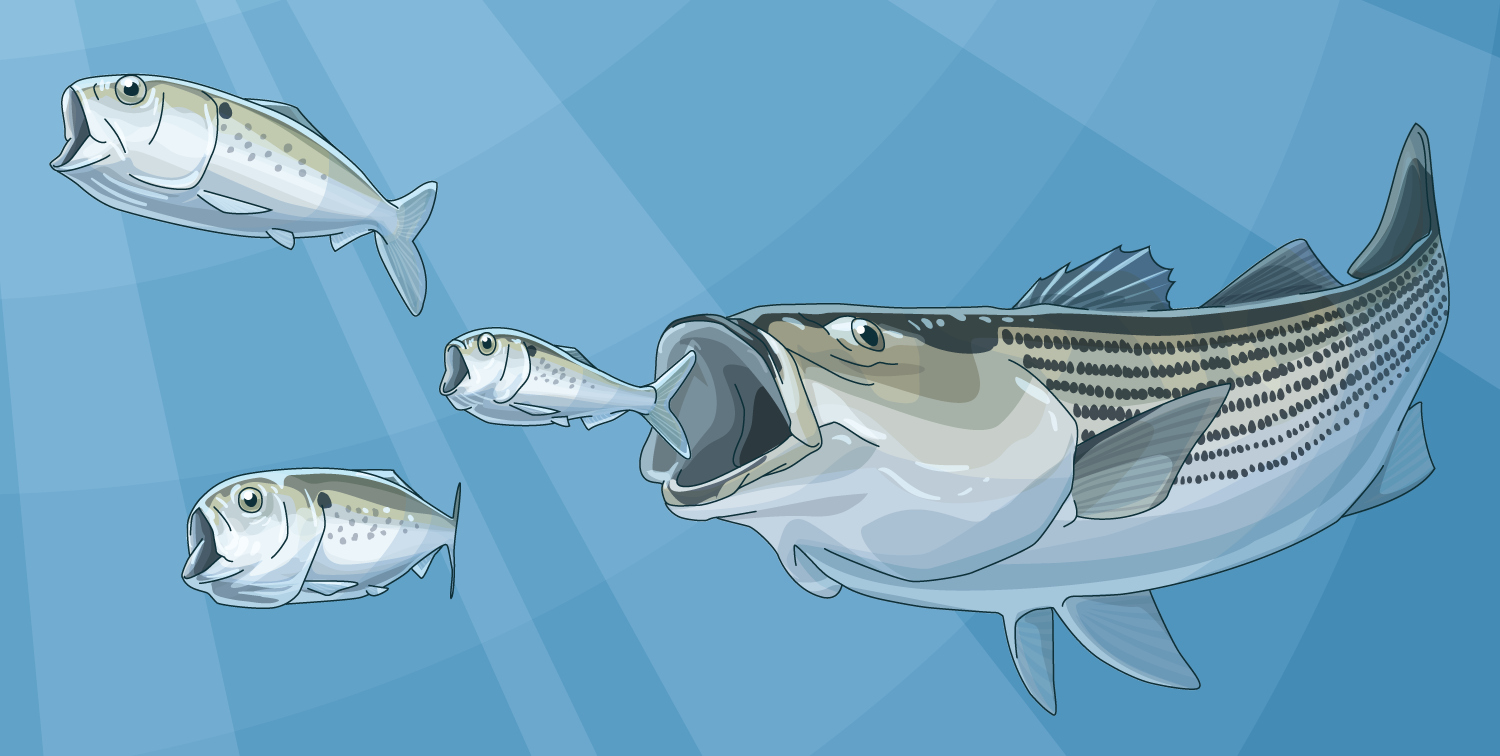 The Atlantic States Marine Fisheries Commission also manages populations of some sought-after game fish that feed on menhaden, such as striped bass.

It appears that we may soon get some promising news about the fish that’s sometimes called the most important one in the sea—the Atlantic menhaden. These small forage fish constitute a key part of the marine food web, and now the Atlantic States Marine Fisheries Commission is nearing completion of a new assessment of the stock.

The science is still undergoing peer review, but initial reports indicate that historically depleted menhaden are showing signs of improvement. A draft version of the assessment reveals that the biomass, or total estimated weight, of the species is up after a period of steep decline. This would echo recent anecdotal reports of whales, fish, and seabirds feeding on large schools of menhaden.

Despite this progress, the draft assessment indicates that there is still a long way to go for the population to return to its historic abundance, or to recover across its full range along the Atlantic coast. This puts commissioners at a crossroads: In the coming months they will decide whether to move forward with modern conservation management of this public resource or backslide to the failed system of the past.

Any improvement for Atlantic menhaden would be good news for striped bass, whales, seabirds, and the many other animals that need large schools of these oily fish for food. But we can’t ignore that this new assessment still relies on a limited, single-species method of counting fish populations. It does not incorporate modern scientific measures which would better ensure that enough menhaden are left in the ocean as prey for marine wildlife.

The commission also manages populations of some sought-after game fish that feed on menhaden, such as striped bass and weakfish, which are in decline. So it’s important that the regulatory body not increase catch levels until it can determine the appropriate amount of menhaden needed in the Atlantic to help speed the recovery of these popular game fish and all the other predators dependent on this key forage species.

In 2012, commissioners wisely recognized how important menhaden are for a healthy ocean and approved the first coastwide catch limits. That action has already resulted in hundreds of millions more menhaden in the water, and the industrial fishing companies that target these fish remained highly profitable even while operating under the increased limits.

But the commissioners went further: They also committed to developing a system to ensure that predators have plenty of menhaden to eat. Now they have the opportunity to build upon success and follow through on that commitment.

There will be pressure from the industrial fishing industry to use this new assessment as an excuse to go back to the old management system, which set no coastwide limit and assumed that fishing had no effect on a seemingly endless menhaden population. That would be a mistake, risking the progress that’s being made.

Commissioners should be proud of the work they’ve done and must stay the course of modern management with science-based catch limits. Putting in place limits that leave enough menhaden for predators to eat will ensure that the coastal ecosystems and the fishing communities that depend on them will be healthy and vibrant, now and for future generations.