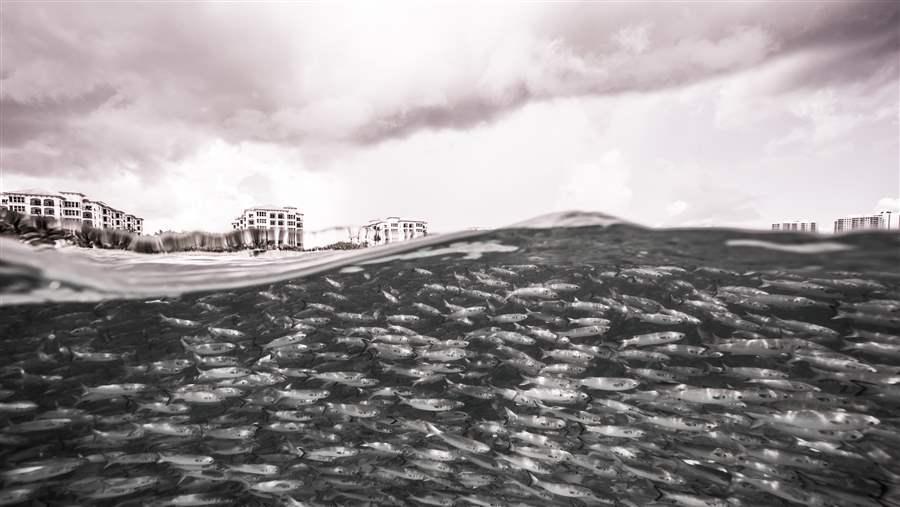 Global demand for forage fish is surging. The small species are used to make products such as fertilizer, cosmetics, and fish meal for aquaculture and animal feed.

Are fish oil supplements really improving our health but hurting our oceans?

That’s one question New York Times bestselling author Paul Greenberg is exploring for his next book, due out next year, The Omega Principle: The Health of Our Hearts, the Strength of Our Minds, and the Survival of our Oceans All in One Little Pill.

Fish oil pills are made from forage fish, some of the most important species in ocean food webs. These small fish, including menhaden and sardines, are a vital food source for many marine animals, including whales, dolphins, seabirds, and fish that people eat, such as grouper, snapper, and salmon. At the same time, forage fish are also used to make products such as fertilizer, cosmetics, and fish meal for aquaculture and animal feed. As a result, in some parts of the world, overfishing has caused forage fish populations to plummet.

Greenberg has made a career out of seeing a story behind almost every fish. In his popular books Four Fish and American Catch, the lifelong angler examined the forces that get seafood from the ocean to our dinner plates. He related tales of greed, hunger, politics, international affairs, and crime on the high seas, stories that raise questions about how we treat the oceans to serve ourselves.

His ability to see the stories behind seafood began as a teenager. He grew up fishing in Long Island Sound, a pastime his mother encouraged because, he recalls, she considered it a “manly, character-building activity.” Similarly, his film critic-writer-psychiatrist father saw it as a way to entertain his son on weekend visits, and eventually encouraged him to submit an article about fishing to the weekly angling magazine New England Fisherman. Later, after earning a bachelor’s degree in Russian studies from Brown University and then spending six years working to establish independent media in Eastern Europe, Greenberg launched his writing career by returning to where he started: writing articles about fish.

Now the award-winning New York City-based writer is investigating the push and pull between human demands on forage fish, the impact on the ocean, and the responsible stewardship of this precious resource. His work comes during his three-year tenure as a Pew marine fellow.

He’s taking a hard look at fish oil—which, he recently told me, is the third-largest-selling supplement in the United States and a $34 billion-a-year global industry. In this case, he’s also stepping squarely into the debate about heart health. 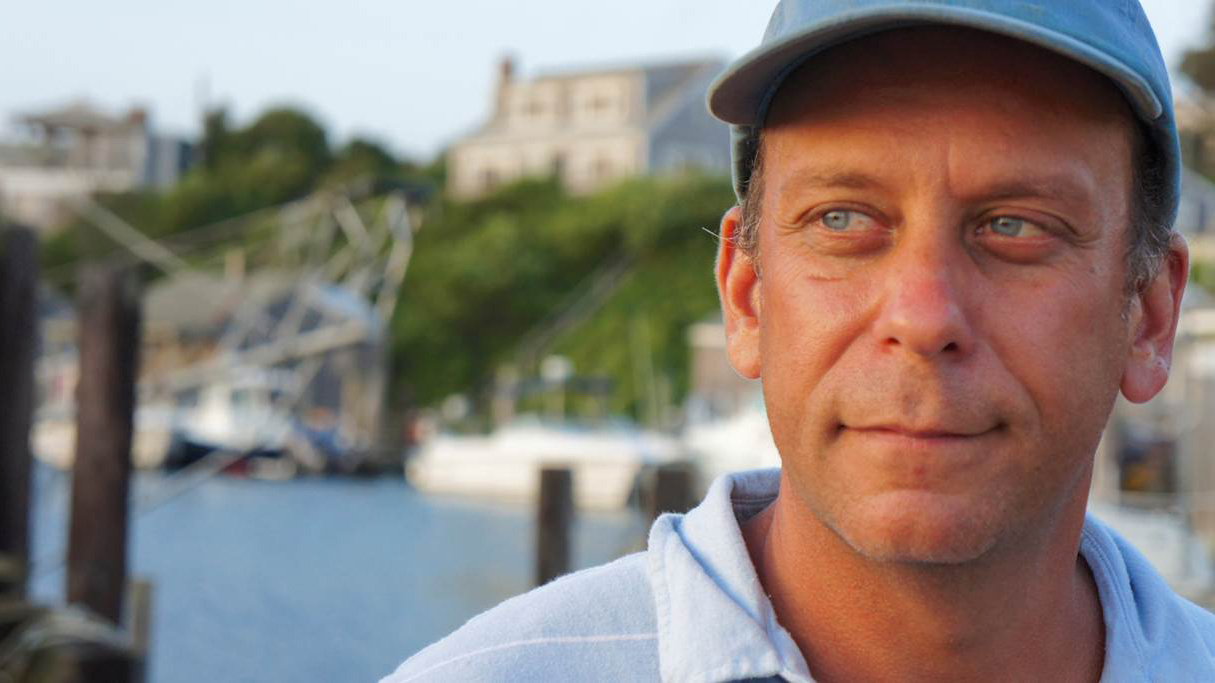 “I’m a middle-aged guy. I have all the issues: cholesterol, forgetting things, anxiety, sleeplessness,” said Greenberg, 47, who takes the fish oil supplements containing omega fatty acids. “These omega-3’s do come across as the fountain of youth.” But as he’s swallowed his daily dose, Greenberg’s thoughts have wandered toward the sea. Beyond their usefulness as ingredients, these small fish are the lifeblood of the oceans that sustain us: “Maybe [they’re] the elixir of life itself.”

Greenberg’s work comes as forage fish are making headlines—despite not being well-understood by the public. Recently, fishery managers along the West Coast of the United States agreed to prohibit commercial fishing on seven groups of forage fish unless scientific analysis shows it won’t harm marine ecosystems or compromise fishing for valuable predators such as salmon. In June, Florida wildlife managers will discuss the management of forage fish in that state’s waters. 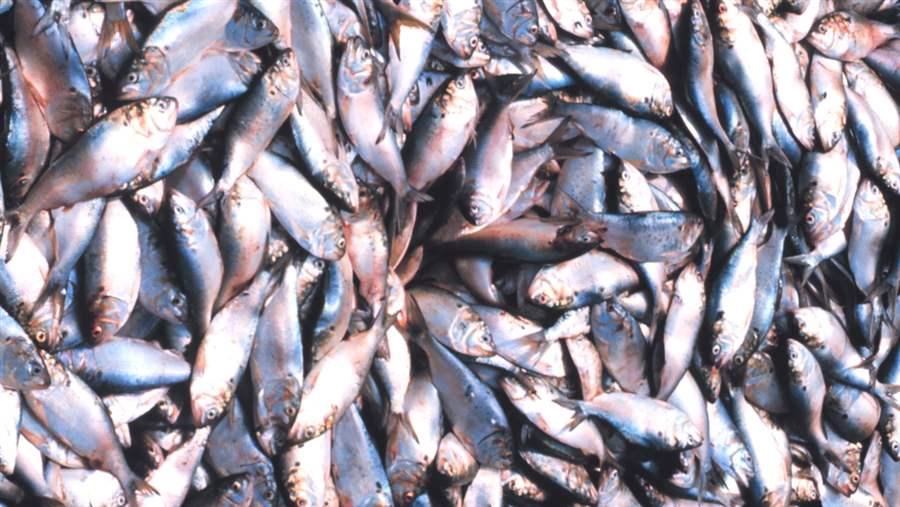 Atlantic menhaden are caught by the hundreds of millions each year.

And in May, East Coast fishery managers might consider changing catch limits on menhaden. Dubbed “the most important fish in the sea” by author H. Bruce Franklin, these fish are captured by the hundreds of millions every year and ground up to make fish oil, fish meal, animal feed, and other products. Managers reduced menhaden catch limits for the first time in 2012 to keep more fish in the water to feed the many animals that depend on them, such as striped bass, ospreys, and humpback whales. A recent assessment shows some improvement in the health of the menhaden population, although the number of fish remains near a historic low. The industrial menhaden fleet wants catch limits increased, so fishery managers need to employ the most up-to-date and comprehensive ecological and biological analysis to help pinpoint how many menhaden should stay in the water as food for marine animals.

But in many ways, these challenges are not new. Greenberg points out that forage fish have been used to make products for thousands of years, dating to the Roman Empire, when some species were ground up to make a product called garam, which could be considered something close to today’s ketchup. Now, millenniums later, both Greenberg and I think it’s time to finally consider forage fish in a broader sense. 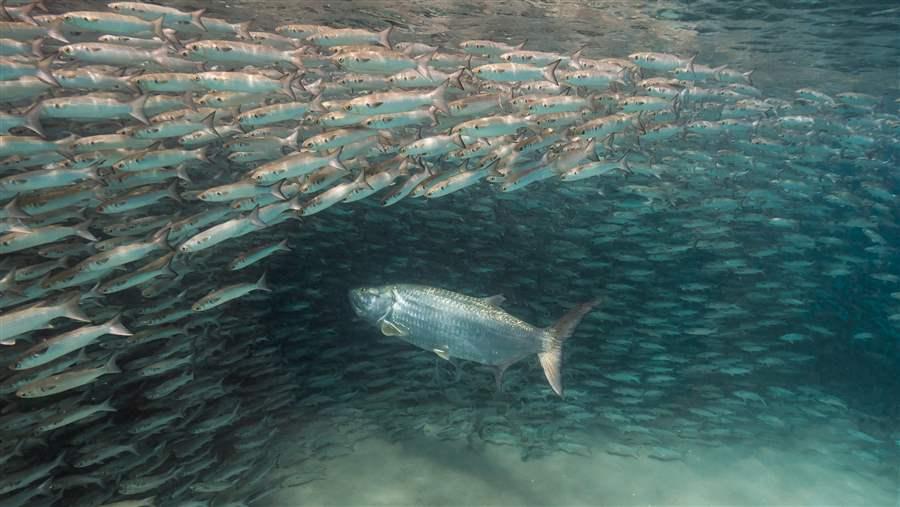 Predators like this tarpon make meals of forage fish. Forage species are critical food sources for animals, including whales, dolphins, seabirds, and larger fish such as snappers and groupers.

“The real question is, where does a fish like a menhaden have its value? As fish meal and oil or in a matrix of the food web?” asks Greenberg. After decades of research, he believes—as I do—that when managing our fish resources we should pay more attention to the diverse ecological roles fish play in marine environments, rather than setting rules that consider only one species at a time. “What are these rules doing,” Greenberg asks, “to the other fish?”

“With seafood you’re dealing with hundreds if not thousands of species that interact with human destiny in different ways at different times,” Greenberg told me. “People say they relate to the ocean through seafood. I try to tie ocean issues to people. I want to put positive, science-based ideas into the world.”