Nationally, total state tax revenue recovered in mid-2013 from its plunge during the Great Recession. But the state-by-state picture is far more mixed. Adjusted for inflation, tax receipts in 30 states had not fully rebounded by the third quarter of 2014.

This means that for every $1 of purchasing power states derived from tax receipts at the 2008 peak, they collectively had 2.5 cents more, based on collections from July through September 2014, up from 1.8 cents in the previous quarter.

But the 50-state total masks how unevenly revenue is recovering state to state. More than five years after the recession’s end, 30 states were still collecting less in real terms than at their individual peaks before or during the recession. In 11 states, tax revenue was down 10 percent or more from those peaks.

Tax revenue trends reflect the effect of economic changes as well as tax structures and policy decisions, such as rate increases or decreases. 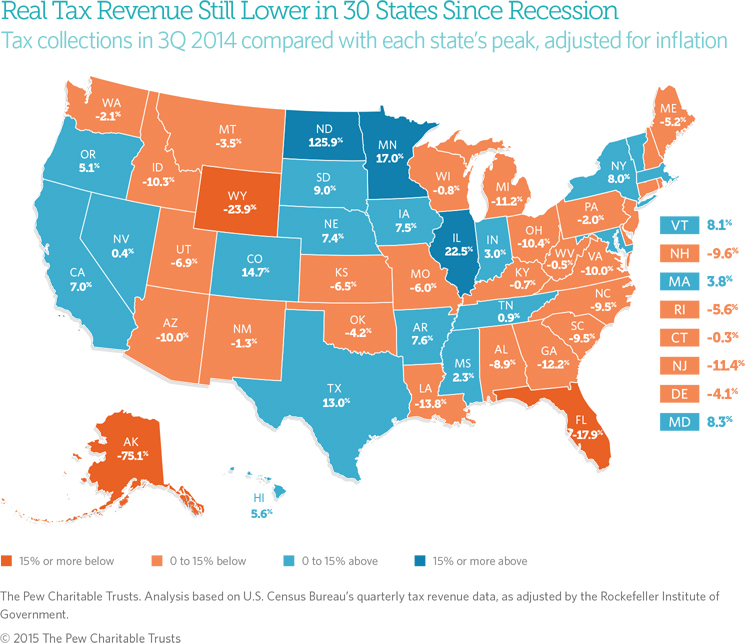 A comparison of each state’s tax receipts in the third quarter of 2014 with its peak quarter of revenue before the end of the recession, averaged across four quarters and adjusted for inflation, shows that:

Total 50-state tax revenue has hovered above its 2008 high mark—even though most states had below-peak receipts—largely because of the recovery of collections in three states with large tax bases: California, Illinois, and Texas. If those states were excluded, overall tax revenue would fall short of its 2008 level.

The latest results show that 50-state tax revenue is growing again after two quarters of declines broke a string of steady increases over the previous 16 quarters. The early 2014 slump follows a one-time surge that occurred a year earlier when some taxpayers accelerated payments on certain income to avoid new federal tax rates.

Looking ahead, tax revenue is expected to continue growing. Preliminary figures for October through December 2014 show increases in personal, sales, and total tax revenue, according to the Nelson A. Rockefeller Institute of Government.

Without adjusting for inflation, 50-state quarterly tax revenue was 12.0 percent above peak, and tax collections had recovered in 38 states as of the third quarter of 2014. Unadjusted figures do not take into account changes in the price of goods and services.

Download the data to see individual state trends from the first quarter of 2006 to the third quarter of 2014. Visit The Pew Charitable Trusts’ interactive resource Fiscal 50: State Trends and Analysis to sort and analyze data for other indicators of state fiscal health.