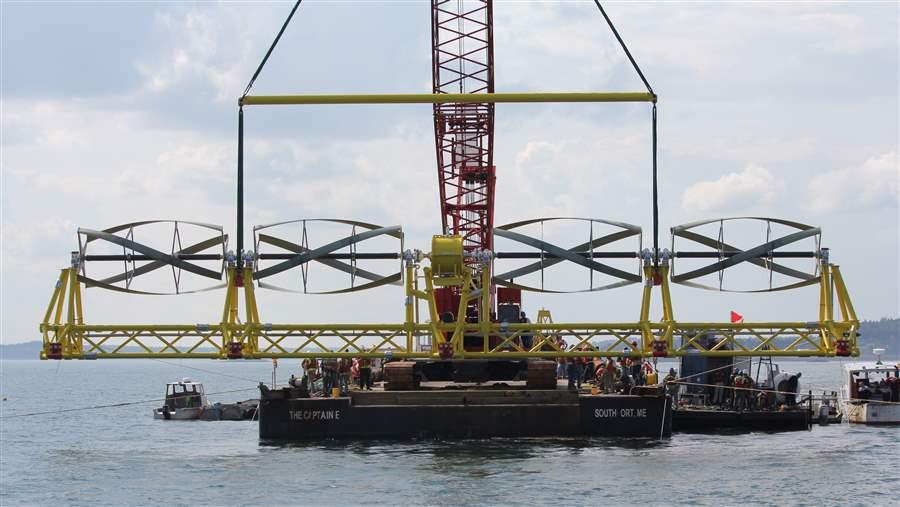 Maine is a pioneer in the development of clean energy, especially wind, biomass, and hydropower. The state has the highest renewable portfolio standard in the country, requiring 40 percent of electricity to come from clean energy sources by 2017—approximately double the goal of most of the other 28 states with similar policies. Maine also has a wind capacity goal of 8 gigawatts by 2030, 5 GW of which must come from offshore. Today, half of the electricity generated in Maine is from renewable power, with 1.8 GW of installed capacity.

Research by The Pew Charitable Trusts, released during a briefing at the University of Maine in Orono, found that the state attracted $900 million in private investment from 2009 to 2013. This amount is projected to grow by an additional $1.9 billion from 2014 to 2023.

“By establishing aggressive goals for clean and efficient energy, Maine is harnessing its renewable resources to create new job opportunities, attract investment, and strengthen its manufacturing base,” said Tom Swanson, manager of Pew’s clean energy initiative. “As a result, the state has developed a mix of mature clean energy technologies, such as hydropower, wind, and biomass, that provides essential power to Maine’s residents, industries, and commercial businesses.”

Maine has a significant wind resource along its Atlantic shoreline and on the crests of the Appalachian range in its northwestern region. Its on- and offshore potential could supply nearly 47 times the state’s current electricity needs. As of December 2014, the state had 13 completed projects totaling 431 megawatts in capacity, and another 1,261 MW were in various stages of development.

In 2013, Maine became the first state to connect an offshore turbine to the power grid when the DeepCwind Consortium, led by the University of Maine, launched the VolturnUS prototype project. The demonstration, a multimillion-dollar private-public partnership, is the culmination of a five-year collaboration to develop and install a floating turbine off Castine, a town about 35 miles south of Bangor. The university is completing final design and engineering work on a full-scale floating platform and projects that it would be deployed farther offshore.

“Research and development of deepwater offshore wind energy is a pathway to strengthening our nation’s energy independence,” said Habib Dagher, Ph.D., P.E., director of the Advanced Structures and Composites Center at the University of Maine. “The wind resource potential in the Gulf of Maine is 156.6 GW—equivalent to roughly 156 nuclear plants. Maine is at the forefront of developing these innovations.” 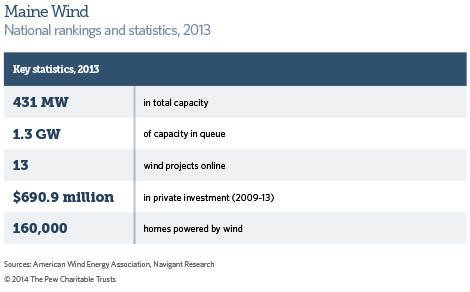 Maine, as the most heavily forested state, generates 2.1 million kilowatt-hours of electrical power from biomass—one-quarter of the total electricity generation in the state and the most per capita of any state. Biomass is energy made from wood and wood waste-derived products such as pellets.

Maine’s university system plays an important role in research and development in the biomass sector, just as it does well with wind power. Researchers at the Forest Bioproducts Research Institute at the University of Maine study ways to bolster commercialization of fuels, chemicals, and advanced materials from forest bioproducts. The institute also fosters collaboration among researchers, wood suppliers, and end users. In 2006, it obtained a $6.9 million award from the National Science Foundation and a matching state grant to develop facilities to support Maine’s biomass industry. The ultimate goal is to build the research infrastructure that leads to a forest-based biorefinery in Maine using trees instead of oil to make fuel and other products and augment the pulp and paper and building products industries.

Marine and hydrokinetic technologies convert the energy of waves, tides, and river and ocean currents into electricity. These systems represent an emerging industry with hundreds of potentially viable technologies. They also offer operators unique advantages, including close proximity to major coastal areas of high energy demand, capacity predictability, and the ability to leverage solutions and lessons learned from more mature renewable industries such as wind and solar.