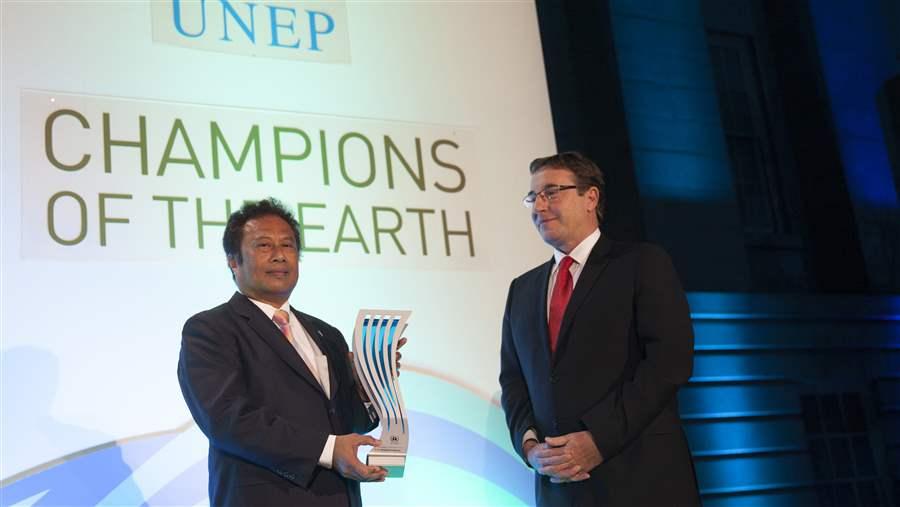 President Remengesau receives the Champion of the Earth Award from  Achim Steiner, executive director of the United Nations Environment Programme.

The U.N. says the prize, called the Champions of the Earth Award, is given to those “whose service to the environment is saving lives, improving livelihoods, and bettering environmental governance.” President Remengesau was recognized “for strengthening the economic and environmental resilience of Palau by spearheading national policies to protect biodiversity.”

Global Ocean Legacy, a project of The Pew Charitable Trusts and its partners, is working with the government and communities of Palau to help create a large, fully protected marine reserve covering 80 percent of the waters surrounding the island. Located in the western Pacific Ocean, the Micronesian nation is world-renowned for its healthy and incredibly diverse marine ecosystem.

Home to more than 1,300 species of fish and 700 species of coral, the country’s waters have been referred to as one of the seven underwater wonders of the world. Palau became a world leader in shark protection in 2009, when it set up a shark sanctuary in its exclusive economic zone.

Profiles of all 2014 recipients of the Champions of the Earth prize can be found on the U.N.’s website.

Global Ocean Legacy is working with local communities, governments, and scientists around the world to protect and conserve some of our most important and unspoiled ocean environments. Learn more at globaloceanlegacy.org.