Abundant biomass and solar resources, falling materials costs, and innovative research have launched Georgia into the national spotlight as a clean energy leader. State and federal policies have helped to make the Peach State the fastest-growing solar market in the country. In addition, the state ranks No. 1 nationally in commercial timberland, making woody biomass—energy made from wood and wood waste-derived products such as wood pellets—a major component of its renewable energy sector. 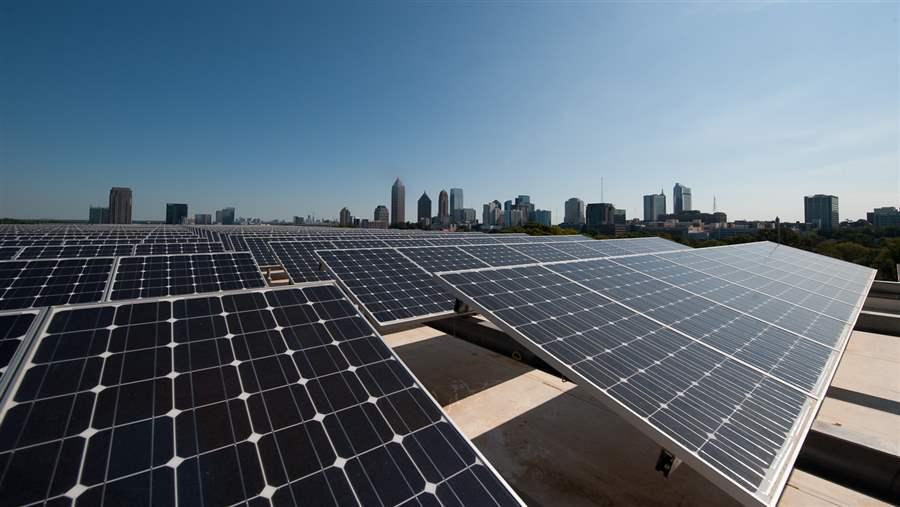 Research by The Pew Charitable Trusts, released during a webinar with industry leaders, found that Georgia attracted $666 million in private clean energy investment from 2009 to 2013 and will generate an additional $4.4 billion over the next decade. Hydropower and biomass currently represent the largest installed capacity of clean energy technologies in the state, with 2 gigawatts and 765 megawatts, respectively, but solar power is the fastest-growing and is projected to increase by 535 percent between 2014 and 2023. Georgia’s installations represented 3 percent of all new clean energy capacity additions in the United States in 2013.

“Solar is more affordable and efficient than ever, and there are several reasons for this continuing trend,” said James Marlow, president of Radiance Solar in Atlanta, who presented during the webinar. “The cost of solar equipment is much lower, tax incentives now capture the total system installation costs, and the state’s utility industry now sees solar as a flexible, affordable addition to its electric generation resources.”

Although Georgia does not have a renewable portfolio standard—a requirement for utilities to obtain a set amount of energy from renewable sources—it does foster clean energy policies that have spurred economic growth, most prominently in solar power. Last year the Georgia Public Service Commission approved a motion for Georgia Power, the state’s largest utility, to add 525 MW of solar power generation to its portfolio by 2016.

The program, known as the Georgia Power Advanced Solar Initiative, includes a solar buyback option that allows customers to purchase electricity from the utility’s solar portfolio. Interconnection guidelines let residential customers who have installed clean energy systems such as wind or solar link to the main electricity grid, and net metering laws allow them to generate electricity from these systems to offset bills from the power company. 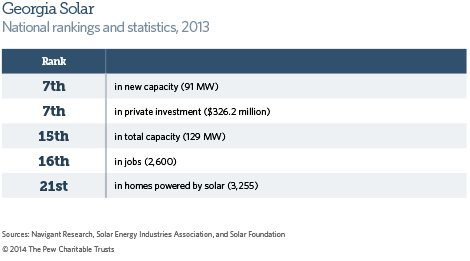 “A suite of policies—a target, a buyback program, interconnection guidelines, and net metering—have catapulted Georgia into a national leadership position in solar,” said Phyllis Cuttino, director of Pew’s clean energy initiative. “The state is now realizing the economic benefits of renewable power, including solar jobs, which grew 225 percent last year to 2,600—the largest gain of any state.”

In addition to its leadership in solar power, Georgia ranks third in the nation for biomass electricity generation. In 1938, the state established the Herty Advanced Materials Development Center in Savannah, which, in partnership with Georgia Southern University, has been a leader in innovating wood waste-derived products such as biofuels and biomass power for over 75 years. The state added 100.5 MW of biomass energy capacity in 2013 and attracted over $150 million in private investment.

Research and development in the state is also driving solar innovation. Georgia Tech in Atlanta is home to one of the country’s two University Centers of Excellence for Photovoltaics Research and Education, funded in part by the U.S. Department of Energy. The program gives students an understanding of the technology behind advanced photovoltaics, researches device performance, and provides training for prospective workers. The center also offers recommendations to the Energy Department and industry on how to lower costs and increase efficiency of photovoltaic installations, helping to make U.S. companies more competitive in the global marketplace.