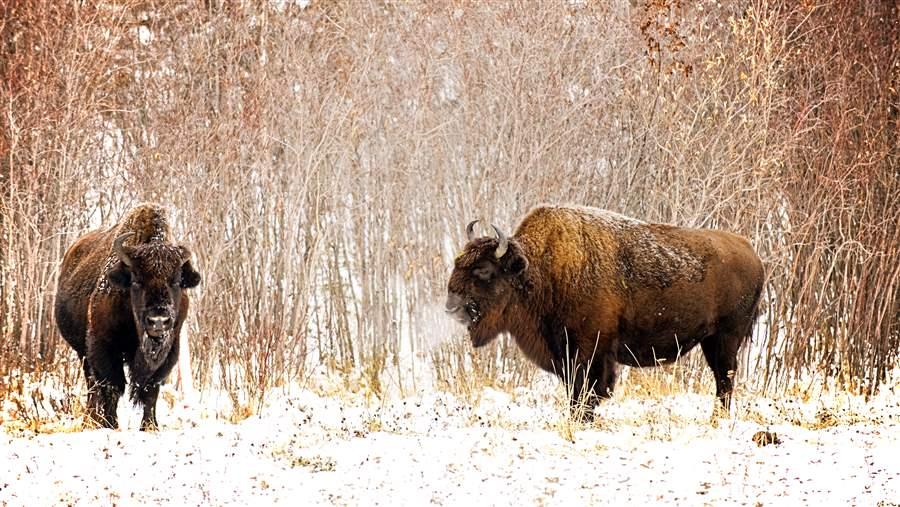 A new 250,000-acre wilderness park in Manitoba’s boreal forest provides protection for a herd of about 300 wood bison, which are listed as threatened under Canada’s Species at Risk Act. Photo credit: Ryerson Clark

Conservation groups are hailing a decision by the government of Manitoba to designate about 250,000 acres of intact boreal forest wilderness as the Canadian province’s newest park.

The remote area, located about 215 miles northwest of Manitoba’s capital city, Winnipeg, is home to the province’s only free-ranging population of wood bison, the largest land mammal in North America.

Significantly, the Chitek Lake Provincial Park, designated Oct. 15, will set a precedent in Manitoba as the first protected area classified for traditional indigenous land use, which includes hunting, fishing, and trapping.  It encompasses part of the traditional territory of the Skownan First Nation, and includes several culturally important archeological sites.

“The protection of an area critical to so many iconic North American mammals—bison, caribou, moose, and elk—is a welcome addition to Manitoba’s first-class park system,” said Mat Jacobson, a boreal conservation officer with The Pew Charitable Trusts.

“It is particularly notable that the area will be the first in the province to officially recognize traditional indigenous use,’’ Jacobson added. “This designation is in keeping with Manitoba’s globally significant efforts to integrate the recognition of the rights and cultural traditions of indigenous peoples with protection of the land.”

The new Manitoba park will protect an area larger than Badlands National Park in South Dakota.

Pew, working with partners such as Ducks Unlimited Canada and the Canadian Parks and Wilderness Society, supports designating half of Canada’s intact boreal forests as parks and protected areas, and endorses world-class sustainable development in the other half.

“On a global scale, this area is extremely important because the trees and soils store massive amounts of carbon, which helps slow the accelerator on climate change,” said Ron Thiessen, executive director of the Canadian Parks and Wilderness Society’s Manitoba chapter. “It is intact and this is large-scale protection, which is what science is telling us we need to do to protect the boreal forest ecosystem.”

According to the provincial government, Chitek Lake Provincial Park is the only place in Manitoba where wood bison and boreal woodland caribou share range with moose, elk, and white-tailed deer.

These bison and caribou are listed as threatened under Canada’s Species at Risk legislation.

The park will be off-limits to mining, logging, and other industrial development.

Its classification for preservation as an indigenous traditional-use area “gives recognition to lands of natural or cultural significance” to indigenous peoples, the government said in its news release announcing the park’s creation.

Under Manitoba’s Protected Areas Initiative process for land-use planning, the government works with indigenous peoples who may be affected by new parks. The province is required to consult with these groups in advance to ensure that new areas being considered for protection don’t infringe on existing aboriginal or treaty rights.

The park’s creation caps a decades-long effort to establish an area where wood bison could thrive in Manitoba’s boreal wilderness. In 1991, Manitoba’s Conservation and Water Stewardship department released 13 wood bison into the central “Interlakes” area between Lake Winnipeg and Lake Winnipegosis, two of the largest freshwater lakes in North America.  The herd has since grown to more than 300 animals.

The provincial government placed the Chitek Lake area under interim protection as a park reserve in 1999.

Its designation as a permanently protected park is the latest in a series of forward-thinking conservation steps taken by Manitoba’s government in recent years, Jacobson said.

“Manitoba is quickly becoming a, if not the, global leader in boreal conservation,” Jacobson said.

The new boreal protection in Manitoba closely follows a similar decision last month by the government of Quebec to create a new 1.2 million acre park in that province’s northern region.

The interim protection of the Kovik River watershed, in Quebec’s Nunavik region, is part of the implementation of the province’s Plan Nord sustainable development and conservation plan.