The ongoing debate about voter identification usually centers on the requirement that voters show some form of photo ID at the polls. In Arkansas, however, the controversy has focused on ID requirements for those casting ballots by mail.

A state law passed in 2013 requires that people voting in person show a photo ID and that absentee voters mail in a copy of a photo ID or current utility bill, bank statement, government check, paycheck, or other government document that shows their name and address. 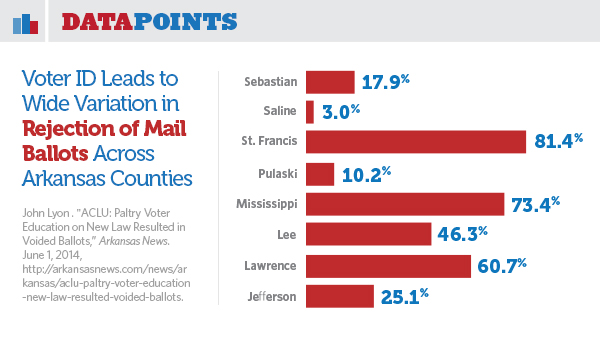 People voting at a polling place without ID may cast a provisional ballot. They then have until the first Monday after Election Day to go to their county election office and provide the required ID or show they are indigent or have a religious objection to having a photo ID. The law does not specify any postelection period for absentee voters to provide ID if they did not include it with their ballots, and after several rounds of legal wrangling, those who cast mail ballots in the 2014 primary election without appropriate ID had their ballots rejected.

Although data are still incomplete, early numbers from several counties shows wide variation in the number of absentee ballots that were rejected for lack of ID, from 3 percent in Saline County to more than 81 percent in St. Francis County.