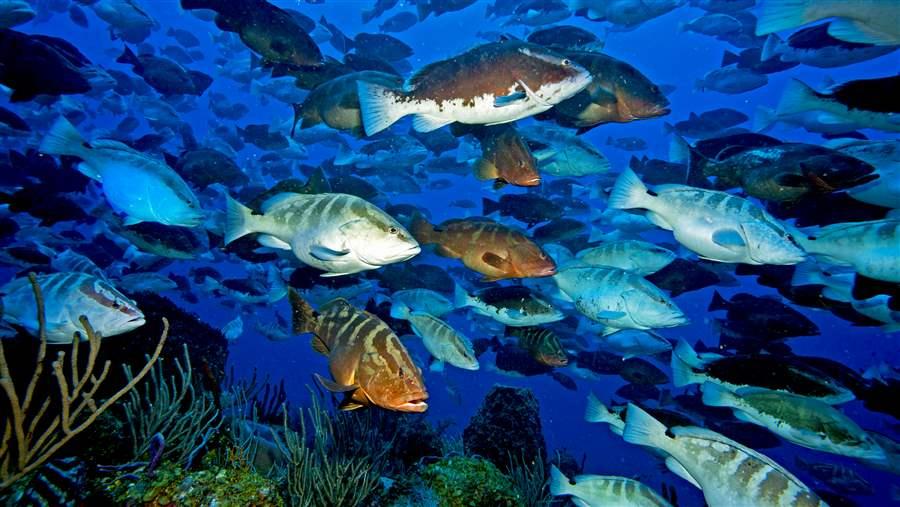 Some fish, such as these Nassau groupers in the Cayman Islands, make an epic journey to special places to spawn. It is an event rarely witnessed.

At certain times each year, many types of fish find their way to special gathering places for a mating ritual that helps determine the survival of their species. They can arrive by the thousands, and some may travel hundreds of miles.

If left alone, these fish will help supply the next generation. But concentrated in one area, they are easy prey for fishermen. Some spawning locations throughout the world have become fishing hot spots and, as a result, species have dwindled.

This is why fishery managers in the southeastern United States are discussing a new proposal to identify important areas where fish gather to breed, and set rules to protect them from fishing.

During two weeks of public meetings starting August 6, the South Atlantic Fishery Management Council will hear what people think about the concept. Sessions are set in all the states where the council governs fish policy in federal waters (3 to 200 miles offshore):  Florida, Georgia, South Carolina, and North Carolina.

In April, an expert group of fishermen endorsed the idea of spawning protections. The snapper-group advisory panel, which provides advice to the council, said it’s critical to give some species a better chance to reproduce more, including groupers and snappers. Those species form the backbone of fishing businesses and are a favorite catch of recreational anglers.

Fishery managers have been considering the idea of protecting spawning fish for years. But prior proposals focused only on a couple of declining populations. Now the council is taking a big-picture approach and considering protections for areas that could benefit many different species.

Protecting spawning areas can boost healthy fish populations and help struggling ones improve. It has worked well in other places. For example, in the Gulf of Mexico’s Madison Swanson reserve, the once-dwindling gag grouper are rebounding. In Belize, where fishermen support safe zones, the imperiled Nassau grouper population is growing healthier. Some experts report seeing young Nassau groupers throughout the region in recent years And at the Dry Tortugas Ecological Reserve in South Florida, depleted fish are recovering, with individuals of many species—mutton snapper, red grouper, yellowtail snapper, and hog snapper—growing larger and more numerous. In fact, some species increased in abundance and size both inside the reserve and throughout the region.

With millions of pounds of fish caught annually off the Southeast coast, we should give fish a little time and space to themselves. We’ll reap the rewards when the future generations fill up our boats and dinner plates, and the ocean ecosystem will be healthier.