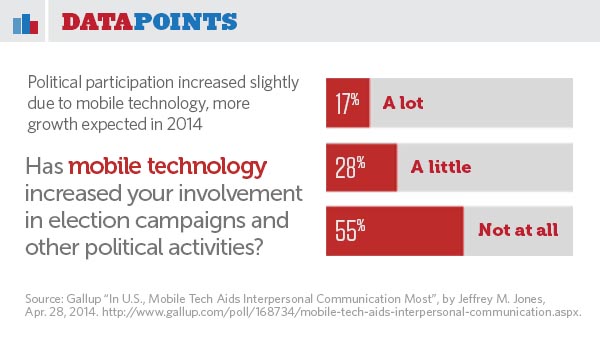 A March 2014 Gallup poll demonstrated that 17 percent of Americans say mobile technology has increased their involvement in elections and other political activity “a lot.” Twenty-eight percent reported that the technology has improved participation a little, and 55 percent said it has not boosted it at all.

Younger respondents were more likely to attribute “a lot” of their increased activity to mobile technology:

Young people are also most likely to use their cellphones to access the Internet; 85 percent of them do so, compared with only 20 percent of cellphone owners over age 65, according to the Pew Research Center.

The Gallup results indicate that use of mobile technology for political participation is still rather light, but this is likely to change as election administrators and campaigns produce new apps and other engagement tools. A Pew study of online registration systems found that by June 2013, four states had developed mobile-optimized systems. In March 2014, Georgia rolled out a new online registration system with a mobile app for Apple and Android devices that provides registration and election information.