In May 2014, a federal appeals court upheld a 2012 lower court ruling mandating the New York City Board of Elections to improve access for the city’s disabled voters.

According to survey data from the Center for Independence of the Disabled, New York, during 16 elections between November 2003 and November 2013, 893 polling places were randomly inspected, and more than 70 percent had at least one physical barrier to access.

Some of the obstacles disabled voters faced include polling places with no ramps, ramps that were too steep, malfunctioning accessible voting machines, a lack of signs designating accessible entrances, or such entrances that were locked.

In its ruling, the U.S. Court of Appeals also upheld the lower court’s remedial plan, which requires the Board of Elections to have a disability coordinator at every polling place, hire an external consultant to survey accessibility at all city polling places, and remove barriers or find alternate locations. 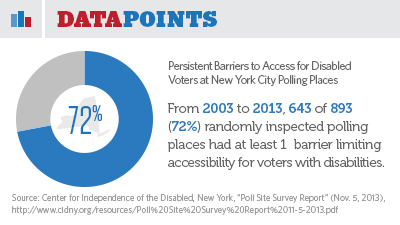