U.S. military installations are leveraging private-sector resources to develop and finance projects that use renewable and energy efficiency technologies. These initiatives are increasing base security, saving money, and helping the Department of Defense meet its energy goals, which include deployment of 1 gigawatt of renewable power on Navy installations by 2020.

Following a May 2 tour of Portsmouth Naval Shipyard in Maine, Senator Angus King (I-ME) underscored the importance of DOD’s clean energy initiatives in an interview with Seacoast online.

“The U.S. Defense Department is the largest single energy user in the world. Energy is a huge cost driver of the entire military structure. Since we are in an age of tight budgets, we need to think about how to use energy efficiently. It just makes sense and is not a feel-good idea. Energy is expensive and has climate implications. The cheapest gallon of oil is the one you don’t have to buy,” Sen. King said. 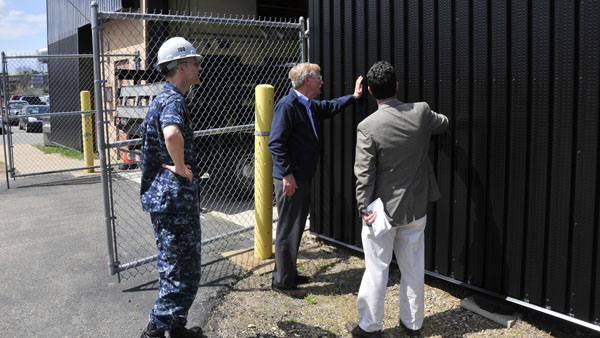 Lt. David Dreyer, the shipyard’s clean energy manager, and John Wyeth, deputy public works officer, led the tour to highlight the installation’s renewable technologies and energy efficiency initiatives. These include a solar thermal wall and a combined heat and power, or CHP, plant that, together, are saving the base millions of dollars while providing a significant amount of energy. CHP technologies provide reliable electricity, mechanical power, and thermal energy by capturing wasted heat from the electricity-generation process and using it produce more power and improve the plant’s efficiency.

Portsmouth Naval Shipyard has been making significant progress in achieving a 30 percent energy reduction,” said Capt. William Greene, the facility’s commander. “New technologies like this solar thermal ventilation system are providing real and measurable energy savings for the installation and proving that every step moves us closer to our objective.

The solar thermal wall saves 2.21 billion British thermal units (Btu) annually, or approximately $22,000. The CHP plant saves an additional 424.6 billion Btu. Due to the project’s overwhelming success, two more walls are to be built on other facilities at the base.

In 1998, the shipyard became one of the first installations to take advantage of an Energy Savings Performance Contract, a new funding tool that allows private-sector companies or utilities to identify and finance energy efficiency opportunities on bases without congressional appropriations and little or no upfront costs to the military.

The Phase 1 efficiency upgrades in 1999 included $11 million in infrastructure improvements, highlighted by construction of the CHP plant. And in the 10 years that followed, the energy upgrades at Portsmouth saved more than $4 million and 7 million gallons of water annually.

Another Energy Savings Performance Contract at the shipyard that kicked off in 2010 is expected to significantly reduce energy consumption, conserve 18 million gallons of water, and save more than $8.4 million over the 14-year contract. Altogether, the savings accrued from the contracts are more than enough to cover the efficiency upgrades.

Looking ahead, Portsmouth Naval Shipyard is collaborating with the National Renewable Energy Laboratory, Naval Expeditionary Warfare Center, and University of New Hampshire to apply for a demonstration project of renewable energy from tidal currents at the shipyard.

They tell me the current in the [Piscataqua] River is one of the highest on the East Coast, in both directions,” said Sen. King. “They are working on the possibility of harnessing tidal power. There is a lot of research still to be done, but the idea is exciting.”

Through the Defense Department’s Installation Energy Test Bed program, the shipyard is working with Ameresco Inc. to develop a microgrid and storage system that will provide uninterrupted power to the base even if the electrical grid fails. Expected to be fully operational in 2015, the project will demonstrate how advanced energy controls can be integrated with the shipyard’s CHP plant, its on-site power generation, to significantly enhance the security at the base and reduce net energy costs. Other clean energy projects under construction at the shipyard include solar photovoltaic, solar hot water, more solar thermal ventilation, and solar windows.