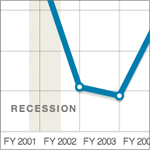 Half of the states expected to have enough financial cushion to cover at least 20 days of operating expenses in fiscal 2013. While states are restoring the reserves and balances tapped during the Great Recession, the median number of days was still 21 short of its prerecession level in fiscal 2007.

For the first time in five years, no state in fiscal 2013 expected its combination of rainy day reserves and general fund balances to drop below zero as it balanced its budget. Another sign of improving state finances was that 13 states were on track to match or exceed the financial cushions they had before the Great Recession, measured in days of operating expenses.

While increasing reserves and balances are a sign of fiscal recovery, there is no single best practice for determining what share of operating costs states should have on hand to deal with unexpected downturns or expenses. Small states or those with a history of highly volatile revenue performance may require larger cushions.

According to states’ estimates for fiscal 2013:

From fiscal 2009 to fiscal 2012, Arizona, California, Kansas, Oregon, Pennsylvania, and Washington drained their reserves and ended with a negative fund balance in at least one year, requiring them to borrow or transfer cash to cover operating costs.

Even as state revenue recovers, budget surpluses do not automatically mean that reserves will be replenished. For example, California’s projected budget surplus for fiscal 2014 launched a debate over whether to spend or save the funds. Ultimately, legislators budgeted $1.1 billion for the rainy day fund and the rest for debt payments and education and health spending.

This measure does not take into account additional resources some states may have available to cushion downturns, such as balances outside of its general fund. So it may not reflect a state’s complete fiscal cushion. In addition, some states undertake considerable spending outside of the general fund, so comparisons across states should be made with caution.