Institutional and individual consumers have the power to change industrial farming practices that endanger human health.

Routinely feeding antibiotics to livestock that are not sick is undermining the effectiveness of life-saving drugs, which leaves children especially vulnerable.

That's why, from inner city Chicago to the suburbs of Denver, schools are buying more food from producers who raise animals without misusing antibiotics.

Below are resources and just a few of the examples of schools committed to serving meat and poultry that are raised without overusing antibiotic.

Make a Change in Your Community

Are you a school administrator?

School Food FOCUS (Food Options for Children in the United States) Learning Lab and The Pew Charitable Trusts developed purchasing guidelines (PDF) for institutions and a Request for Proposals template that any school district can adapt for its own use.

School Food FOCUS is working with school districts across the country to obtain meat and poultry raised without antibiotics.

Are you a parent?

If you are interested in changing the menu in your local school system, call your principal, your school board representatives, and your school superintendent, and tell them that you want what Chicago's students have: meat and poultry raised without the routine use of antibiotics.

The wonderful thing about food is you get three votes a day. Every one of them has the potential to change the world. take away. Michael Pollan, author of The Omnivore’s Dilemma and Cooked -

This sample letter (DOC) can be sent to school officials, outlining what steps they can take to protect our children's health. 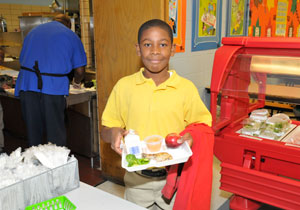 Chicago Public Schools, the third-largest school system in the country, announced in late 2011 that it had begun serving local chicken raised without antibiotics to students in 473 schools. This purchase, made through food service provider Chartwells-Thompson Hospitality, was the first of its kind. No other district in the nation was serving this kind of poultry regularly at such a scale.

Read the full press release on the announcement and view the photo essay, which provides more details on the original purchasing decision.

For the 2013-14 school year, Chicago Public Schools is requiring its food service provider to serve poultry raised without antibiotics at least once a month in its more than 600 elementary and secondary schools. 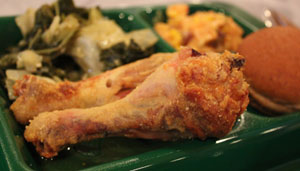 On September 18, 2013, Colorado's largest school district, Jefferson County Public Schools, announced that it will be serving local poultry raised on farms where antibiotics are not used. The chicken drumsticks from Boulder Natural Meats will be served about once a month to 35,000 students—some 14,000 pounds of poultry per meal.