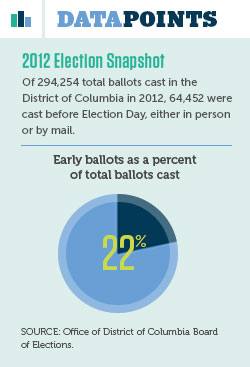 The 2012 election was also the first presidential election in which District residents could vote without an excuse at early voting centers. More than 1 in 5 voters cast ballots either in person or by mail before Election Day, compared with 1 in 10 voters in 2008. Even with so many early voters, the city had the nation’s second-longest average wait at the polls, at 34 minutes, behind Florida.