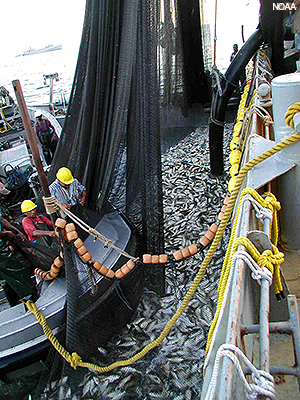 After decades of decline and chronic overfishing, the Atlantic menhaden might have just turned the corner toward a comeback. A rebuilt population of these little fish would have big benefits for the ecosystem and economy of the entire east coast.

The Atlantic States Marine Fisheries Commission, a body of regulators from 15 states, made important management decisions last month that will restore and protect Atlantic menhaden populations. For the first time ever, coastwide limits were placed on the amount of menhaden that can be taken out of the sea. Industries responsible for overfishing this important species will have to reduce their catch by 25 percent of what they caught in 2011.

This means that approximately 300 million more menhaden will be left in the ocean each year to fulfill their role in the marine food web instead of being used for industrial commodities or bait.

The unassuming Atlantic menhaden, often called “the most important fish in the sea,” plays an essential role in coastal ecosystems from Maine to Florida. It is a food source for wildlife such as whales, dolphins, ospreys, and eagles, as well as valuable fish species such as tuna, cod, striped bass, and tarpon.

In an unprecedented outpouring of support, more than 350 fishermen, conservationists, scientists, and other proponents of menhaden protection attended the commission's meeting December 14, 2012. Their presence bolstered the more than 126,000 public comments encouraging the commission to make a science-based decision.

Overfishing must end, if we are to restore menhaden and support the thousands of jobs that depend on healthy coastal ecosystems.-Lee Crockett, director, U.S. Fisheries Campaigns<

It is now up to the states to implement the coastwide conservation efforts the commission approved. That could require more vigilance from the public, especially when it comes to states like Virginia where the legislature has to pass a law to implement the cap. Virginia is also where approximately 80 percent of the Atlantic menhaden catch takes place and the industry there has persuaded state officials to oppose previous attempts to conserve the species.

If the state fails to act, the federal government has the authority to shut down Virginia's menhaden fishing. But it shouldn't come to that. Virginia's leaders should act swiftly to put the new management plan in place. Overfishing must end, if we are to restore menhaden and support the thousands of jobs that depend on healthy coastal ecosystems.