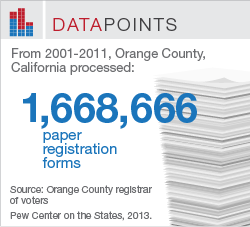 Late last year, we featured the significant amount of post-election data provided by the registrar’s office in Orange County, California. The office also provides a great deal of information related to other aspects of election administration, including reports on voter registration accuracy and voter list maintenance.

The 2012 report provides detailed data about how the county, with more than 1.6 million registered voters, maintains its rolls, how the process has changed and improved over the years, and what challenges still remain. Highlights from the report include: