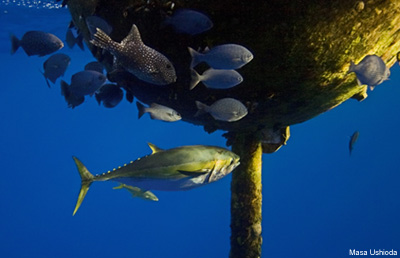 - will gather to discuss coordinated management efforts for fishing of tuna, tuna-like species and other species affected by tuna fishing.

Collectively, these five organizations manage tuna fisheries that extend across 91 percent of the world’s ocean surface. That’s more than 325 million square kilometres (202 million square miles), within which more than four million metric tonnes of tuna are taken annually by tens of thousands of vessels, many of which move from ocean to ocean throughout the year. This third Kobe meeting, named after the city in Japan which hosted the first gathering, may be the last time these five tuna RFMOs will meet.

In oceans around the world, tuna stocks are in serious decline. Too many boats are chasing too few fish, and illegal, unreported and unregulated (IUU) fishing is rampant. Of the known highly migratory tuna and tuna-like species, eight percent are depleted, 21 percent are overexploited and 50 percent are fully exploited. Plus, more than half of the shark species caught in high-seas fisheries, like the tuna fisheries managed by the Kobe parties, are Near Threatened Vulnerable or Endangered.

The Pew Environment Group is calling upon Kobe III delegates to: