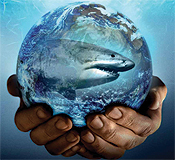 Lively debates followed two previews of Sharkwater at packed cinemas in Paris and Marseilles on 25 and 27 March respectively.

On 25 March, in collaboration with the Shark Alliance and WWF, MK2 (1) organised a successful preview and debate around the film "les Seigneurs de la mer" (Sharkwater), in Paris.

Following the film, the audience joined a debate featuring Rob Stewart, Bernard Séret the French shark specialist, Domitilla Senni for the Shark Alliance and a representative of the Sea Shepherd Conservation Group, with many staying on for interviews or lively discussions about shark conservation projects.

On 27 March 2008, the Shark Alliance was invited to another preview with Rob Stewart in Versailles (near Paris) attended by around 400 people and again followed by a debate between the public and Rob Stewart, Charles Braine (WWWF-France) and Nicole Aussedat (Shark Alliance).

Sharkwater will be shown at 100 cinemas around France from 9 April.

(1) MK2 is the distribution company for Sharkwater in France, and is known for programming committed popular films.