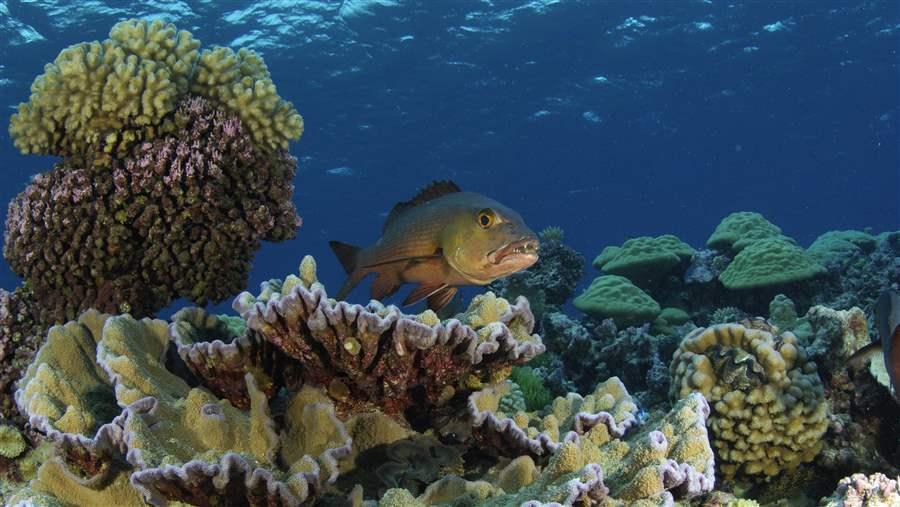 The president extended the boundaries around three of the monument’s five marine reserves—Johnston Atoll, Wake Atoll, and Jarvis Island—from the area 50 miles from shore, designated by President George W. Bush in 2009, to 200 miles from shore. Taken together, the expanded protections for the waters around these atolls and islands—which are not contiguous—provide approximately an additional 408,000 square miles (approximately 1,050,000 square kilometers) to the monument. This action is the latest in a global movement to create large, highly protected marine reserves to counter the dramatic declines in ocean health caused by overfishing, pollution, and development, as well as the emerging challenges associated with climate change.

“This marks an important day for ocean conservation in this country,” said Matt Rand, who leads Pew’s Global Ocean Legacy project, which advocates for establishment of the world’s great marine parks. “The expansion of these marine reserves will greatly enhance the footprint of protection already there and with it, support a vast array of sea life that inhabits one of the most pristine ocean systems remaining on Earth.”

We hope the steps taken today by the U.S. government will accelerate similar actions by a growing list of coastal nations to protect more of the world’s great ocean treasures.Matt Rand, The Pew Charitable Trusts

“Today’s action by the president protects some of the world’s most important ocean habitats and provides sanctuary for rare and endangered sharks, seabirds, turtles, and marine mammals,” said Rand. “We hope the steps taken today by the U.S. government will accelerate similar actions by a growing list of coastal nations to protect more of the world’s great ocean treasures.”

Spread over a swath of ocean thousands of miles southwest of the Hawaiian Islands, the island and atoll areas that make up the Pacific Remote Islands Marine National Monument are distant, uninhabited, and teeming with wildlife. A unique ocean environment, these waters are home to hundreds of seamounts, or undersea mountains, as well as spectacular coral ecosystems that provide vital breeding, nursery, and feeding grounds for whales, sea turtles, fish, and millions of seabirds.

Over the past decade, the Global Ocean Legacy project has worked around the world with governments, scientists, fishermen, and residents to create the first generation of great marine parks. Those efforts have resulted in the protection of nearly 1.4 million square miles (nearly 3.6 million square kilometers) of ocean. In recent years, historic marine conservation decisions have been made by the United States in designating the Papahānaumokuākea Marine National Monument in the Northwestern Hawaiian Islands in 2006, by the United Kingdom in establishing the Chagos Marine Reserve—the world’s largest—in the Indian Ocean in 2010, and by Australia in designating the Coral Sea Marine Park in 2012.