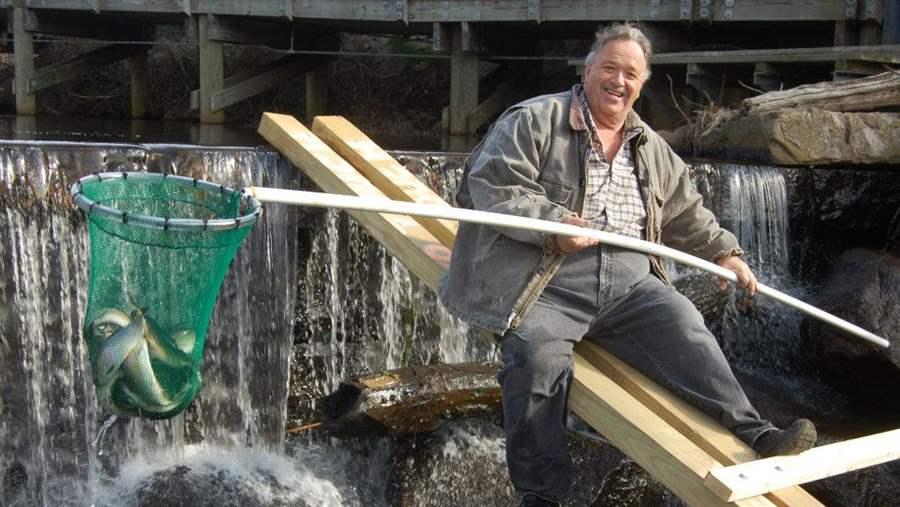 Volunteer Bill McWha at the Main Street Dam in Wakefield, Rhode Island, where he has led efforts since 2010 to lift river herring over a dam so they can reach their spawning grounds.

UPS driver Bill McWha had just moved to Wakefield, Rhode Island, in 2010 when he decided to check out his town’s main river. From the banks of the Saugatucket, McWha was horrified by what he saw: thousands of migrating river herring stuck at a dam, unable to swim over to reach their spawning sites.

So he took matters into his own hands. The next day, McWha returned to the river with a net, positioned himself on a 14-foot beam that had washed ashore during a flood, and started lifting 10 to 15 fish at a time over the Main Street Dam.  Many passersby shook their heads, but others were curious. After he explained that he was helping a fish species reproduce, about a dozen of them joined his cause.

During the ensuing three weeks, McWha and his helpers tossed about 20,000 fish over the dam, allowing them to continue a migration that usually happens every March and April.

State wildlife officials, whom McWha informed about his rescue efforts, saw an opportunity to further help the state’s fisheries: They took 2,000 of the fish to stock a nearby pond in hopes of jump-starting a herring run on another river.

“I knew the fish were in trouble, and I just felt terrible,” explained the 65-year-old McWha, who developed a passion for fish in the fifth grade after learning how salmon returned to their birthplaces to spawn.

“I thought, ‘What a waste that these herring weren’t going to be able to spawn.’ I felt an emotional connection to them, and I just had to get them over the dam.”

McWha’s fish lift turned into an annual event. In 2013, the effort expanded upstream, where McWha and his volunteers formed a bucket brigade to carry fish around a second dam. By 2014, he had amassed 75 volunteers, and that year they ushered nearly 72,000 fish over the Main Street Dam.

Starting last year, however, the lifting efforts slowed at both dams, as federal and state officials have tried to re-engineer existing passageways known as fish ladders to help more fish move over the dams independently. This spring, as the river herring make their journey once again, McWha and his volunteers will watch over the ladders, count fish to estimate the size of the year’s run, and stand by to lift and carry fish if the newer ladders don’t work as designed. 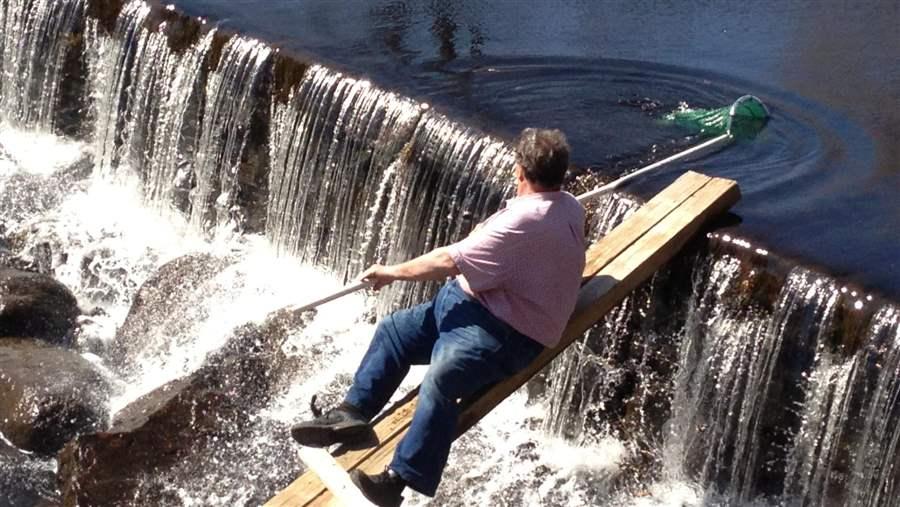 McWha tosses river herring over a dam on the Saugatucket River. He constructed his platform after turning his rescue efforts into a yearly event.

The mighty river herring are barely hanging on

Blueback herring and alewives, collectively known as river herring, are critically important because they are forage fish—small, schooling species that serve as food for many other important marine animals ranging from striped bass to seabirds and seals. River herring spend most of their lives at sea before returning to rivers and streams to spawn.

Primarily because of overfishing and dams, the numbers of river herring along the Atlantic coast have plummeted 93 percent since the 1970s. To help reverse that decline, state and federal officials have invested millions of dollars to improve stream habitat for river herring. Despite those efforts, the river herring recovery has been uneven at best. In fact, in some parts of New England, 2015 may have been the worst year since record-keeping began for river herring migration.

On the Saugatucket, only about 15,000 fish showed up in 2015, compared with approximately 74,000 the year before, according to state wildlife officials. Some scientists blame those low numbers on overfishing at sea.

Because river herring species are so depleted, fishing for them is banned in most states—including in the coastal waters that extend 3 nautical miles from shore. But farther out, industrial ships with huge nets scoop up river herring along with their intended catch. This problem of incidental catch is particularly acute when the vessels are targeting Atlantic herring, the oceanic cousins of river herring.

Both the New England and Mid-Atlantic fishery management councils, which set fishing policy in federal waters from Maine to North Carolina, have placed yearly limits on the amount of river herring that can be killed in the Atlantic herring fishery. But the caps aren’t as effective as they could be because of little oversight at sea and mounting pressure from industry to weaken the limits before they’ve had time to work.

Information on the problem is limited because most vessels fishing for Atlantic herring still do not have independent observers on board to monitor activity, despite wide agreement among the regional fishery management councils that such monitoring should be increased. Both the New England and mid-Atlantic councils approved plans in 2012 requiring 100 percent observer coverage with partial industry funding.

Unfortunately, the National Oceanic and Atmospheric Administration’s Fisheries Service (NOAA Fisheries) rejected those plans, in part because a joint fishery council and industry proposal would have shifted some of the costs to NOAA Fisheries—and the agency was concerned it couldn’t afford to pay its portion. 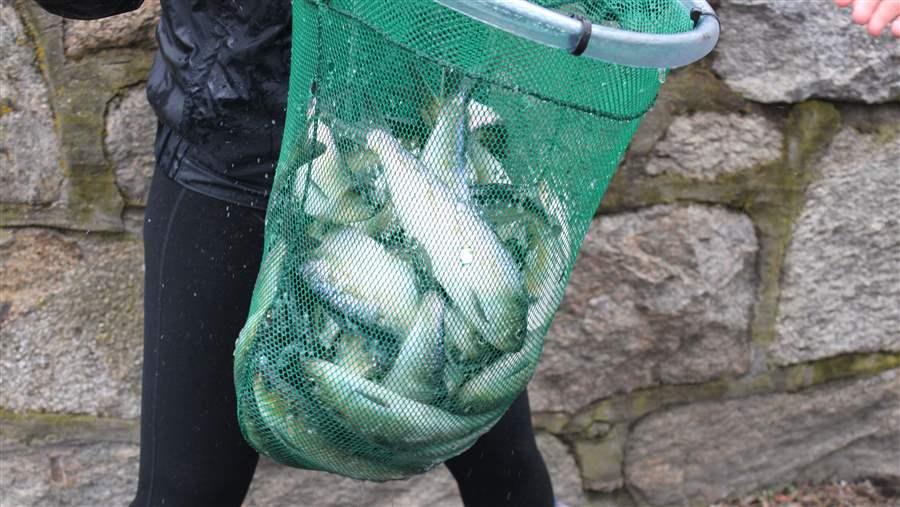 Primarily because of overfishing and dams, the numbers of river herring along the Atlantic coast have plummeted 93 percent since the 1970s.

A major step backward for a struggling fish

To make matters worse, the New England Fishery Management Council recently voted to increase the amount of river herring that can be killed incidentally. This would allow a 40 percent hike in the incidental catch of river herring in waters off southern New England, where the Saugatucket River empties into the sea. Throughout the region, the council’s recommendation would allow more than half a million additional fish to be killed than is allowable with the current rules.

This recommendation is a slap in the face to everyone—from McWha to recreational fishermen—who have worked so hard and invested so much to help these fish. NOAA Fisheries has final say on the council’s proposal, and I join many others in asking that the agency reject the proposal.

Instead of allowing more fish to be killed, the council should be doing the opposite: reducing incidental catch of river herring by the Atlantic herring fishing fleet, in particular the large midwater trawlers, which use expansive nets to scoop up sea life and are among the largest fishing vessels working the Atlantic coast.

River herring are a national treasure and the backbone of many New England fisheries. They need our protection—something that people such as Bill McWha recognize as common sense.

“I think people need to realize that these forage fish have to be in the ocean because everything else eats them,” he said. “What these ships are doing isn’t fishing. This is going through the ocean and wiping them out. It’s just not right.”