A recent move by New England ocean fisheries management officials to suspend monitoring of commercial fishing vessels is the latest sign of disarray in a program meant to provide reliable, independent information about fishing. A good monitoring system tracks the amount and types of fish taken from the water and also gathers information about the “bycatch,” or nontarget animals killed by fishing. These data are essential for proper fishery management, and a decline in monitoring in the Northeast and mid-Atlantic undermines efforts to make the region’s fishing more sustainable.

The New England Fishery Management Council voted June 18 to suspend requirements that independent observers be on board vessels fishing for bottom-dwelling fish such as cod and haddock, known as groundfish. The vote was motivated by industry concerns over who would pay for the monitors. The move will take effect only if approved by the Fisheries Service of the National Oceanic and Atmospheric Administration (NOAA Fisheries), the agency responsible for the stewardship of marine resources. For the past five years, NOAA Fisheries has absorbed most of the cost of placing observers aboard the boats, but the agency announced earlier this year that it expected fishermen to assume those payments by the end of 2015. 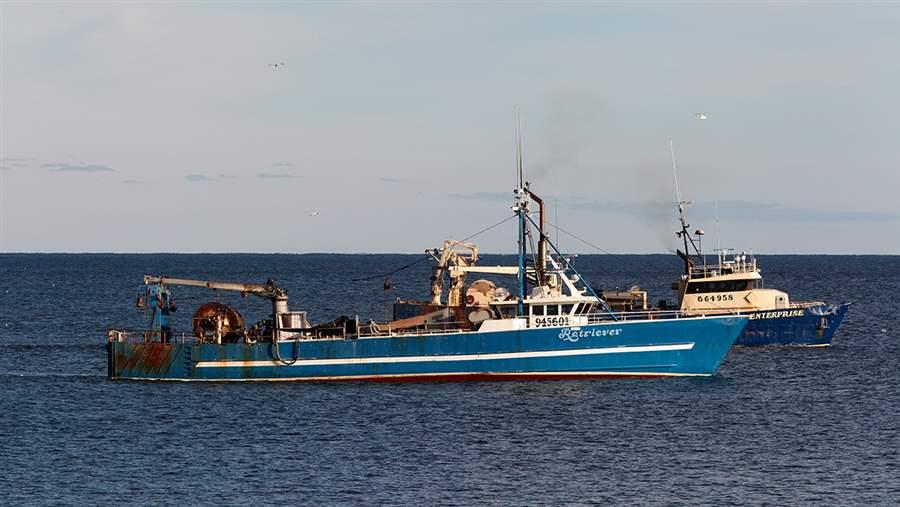 Mid-water trawl vessels are some of the largest fishing boats on the East Coast. These boats were fishing close to shore in Rhode Island state waters.

Without observers aboard these vessels, it will be hard for scientists and fishery managers to know what’s actually happening on the water. That knowledge is especially critical right now, with New England’s cod population at a historic low and very tight catch limits in place.

The groundfish fleet isn’t the only one poised to lose observers. Incredibly, some of the largest fishing vessels working the U.S. Atlantic Coast are also likely to see a dramatic reduction in the number of at-sea monitors this year. For example, monitoring of the midwater trawlers in the industrialized Atlantic herring fishing fleet is projected to drop from 30 percent of fishing trips in 2014 to about 3 percent in 2015. Midwater trawlers fishing for Atlantic mackerel, a depleted species, will have no monitors at all this year, according to NOAA.

These declines come despite votes three years ago by both the New England and Mid-Atlantic councils requiring monitoring of all trips by midwater trawlers. Industry representatives have even said they would support the 100 percent monitoring rule if costs could be kept low. However, a proposal to have the government and industry share the costs of observers fell apart in 2013, and the issue has yet to be resolved.

The lack of observers on this fishing fleet is especially disturbing because midwater trawlers deploy massive nets that, if used indiscriminately, can both quickly deplete forage fish populations and land an enormous amount of bycatch. Forage fish, especially Atlantic herring, play a crucial role in the ocean food web. It is telling that fishermen who are not part of these industrial fleets for herring and mackerel have voiced concern that the removal of large amounts of these baitfish will harm their ability to catch other predator fish such as tuna or striped bass.

Scientists and conservationists say they are worried about the volume of bycatch scooped up in midwater trawlers’ massive nets. River herring and shad—both listed by federal agencies as “species of concern” due to serious population declines—are vulnerable to this sort of bycatch because they frequently school together with Atlantic herring. Fishery managers have enacted limits on the amount of river herring and shad that can be killed as bycatch, but without adequate monitoring it will be difficult to verify that those limits are actually being obeyed.

Better technology holds some promise: A pilot program to test electronic monitors is underway in New England, and fishing sectors elsewhere around the country are moving ahead with electronic monitoring that they say costs less than having human observers. But more must be done.

NOAA Fisheries and industry leaders must find a way to get enough eyes—be they human or mechanical—on the fishing. For now, it is discouraging to see the rate of monitoring drop to the single digits. Measurement is the heart of science, and you can’t manage a fishery if you can’t measure what’s happening there.