Shana Miller was fresh out of college in 1998 when she came face-to-face with one of the fastest fish in the sea.

She and her friends battled for three hours to haul a 154-pound bluefin tuna aboard their boat off the Maryland coast. And when she finally looked the creature in the eye, she felt something unexpected.

“There was something very personal,” she recalled when she and I talked recently. “I felt it looking at me. It was big, beautiful, fast, and powerful. That experience put me over the edge to want to study bluefin tuna.” 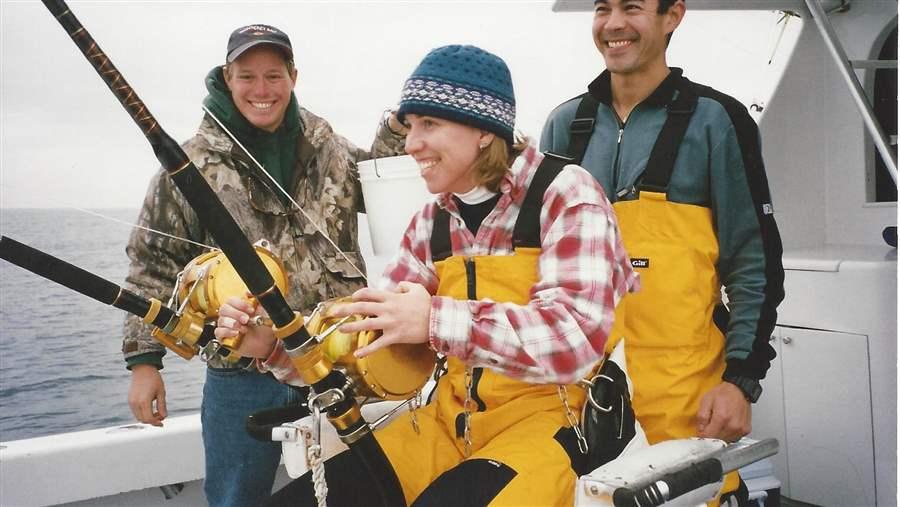 I asked Miller what she did with the fish. It turns out that she and her friends ate it, not realizing then the extent of overfishing that has greatly reduced bluefin populations—to the point that western Atlantic bluefin tuna populations are now just 55 percent of their already depleted 1970 level. But I admire what happened next.

Seizing on the passion that took hold that day—she describes herself as the “biggest bluefin fan on the planet”—Miller, now 38 and holder of a master’s degree in marine biology, has become one of the most knowledgeable full-time bluefin conservation advocates I know.

Miller and I are among many people who are fascinated by the legendary fish, although she’s been luckier than I have been in getting close encounters. She and other researchers have discovered that bluefin swim as fast as racehorses run, grow to the size of a small car, make transoceanic migrations, dive deeper than 4,000 feet, and live up to 40 years.

And she and I are among many people celebrating a conservation victory: new fishery management measures that will help the species recover.

After years of debate and study, the National Oceanic and Atmospheric Administration’s Fisheries Service (NOAA Fisheries) is finalizing restrictions on certain fishing gear that can harm bluefin in two areas covering about 27,000 square miles of the Gulf of Mexico—the only known spawning grounds for the western Atlantic bluefin.

The restrictions are expected to go into effect in January, meaning that they will be in place by the peak spawning months of April and May. Gear restrictions also will apply each year from December through April over more than 5,500 square miles off Cape Hatteras, North Carolina, where bluefin feed. 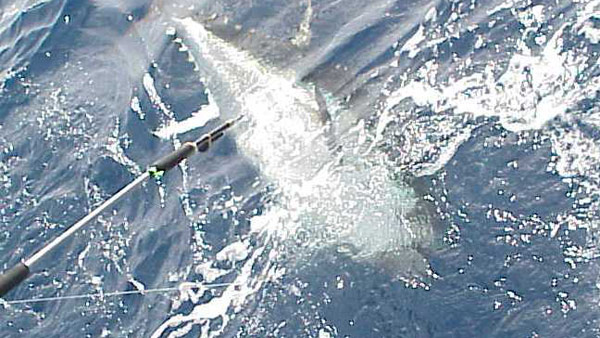 A bluefin tuna is tagged during a research mission in the Gulf of Mexico.

“This is a very significant step forward,” said Miller, who works on bluefin tuna issues at The Ocean Foundation and advises me and others at The Pew Charitable Trusts. “If we give bluefin a little bit of a break, they’ll come back.”

The measures will prohibit the use of long fishing lines baited with hundreds of hooks at the water’s surface. These lines, which can extend up to 40 miles, are typically used to catch swordfish and yellowfin tuna—but also often snare and kill “incidental” catch, including bluefin and about 80 other types of marine wildlife, ranging from hammerhead sharks to leatherback turtles.

After the new measures are in place, fishermen will still be allowed to fish using alternative gear, known as green sticks and buoy gear (learn more about those here), which lessen incidental catch while minimizing the economic impact of the restrictions on fishermen.

Commercial longline fishermen haven’t been permitted to intentionally catch bluefin in the Gulf since 1982. But there and along the Eastern Seaboard, they’ve been allowed to catch and keep up to three of the fish per trip that were hooked incidentally. The rest of the bluefin caught without being targeted had to be thrown back and were often already dead.

Unfortunately, the total amount of bluefin accidentally caught regularly exceeded levels that regulators set for the year—with no real penalties. I’m exceptionally pleased that this will change under the new rules, which include a national cap on surface longline incidental catch of bluefin. Once that cap is reached, all surface longline fishing for swordfish and yellowfin tuna must stop.

As tough as bluefin seem, Miller told me she spied their weakness early in her conservation career. As a graduate student at Stanford University, she was part of a research group that chartered a commercial longline fishing vessel in the Gulf in search of bluefin to tag for study. Even though researchers handled the fish carefully, some of the bluefin they caught didn’t survive—a devastating outcome for people who were trying to save them, not kill them. 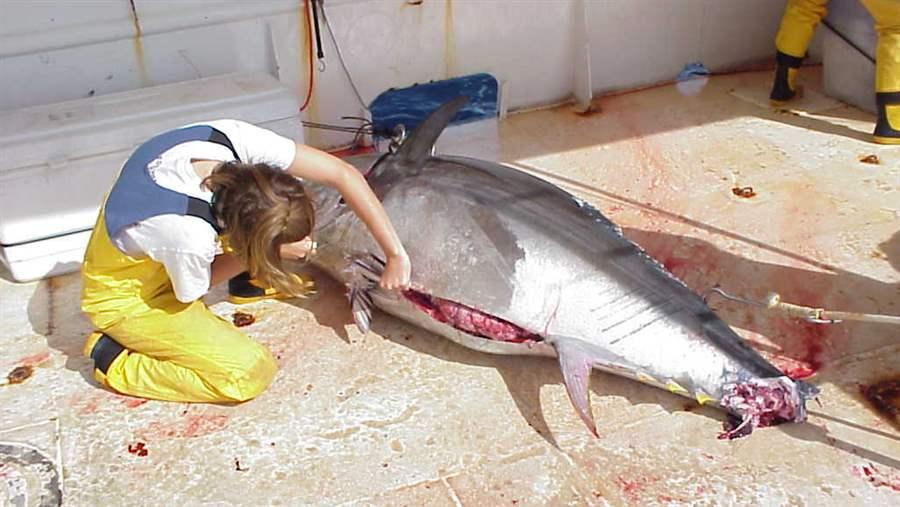 Shana Miller examines a bluefin tuna inadvertently killed during a research mission on a longline fishing vessel in the Gulf of Mexico. The bluefin was attacked by a pilot whale while hooked on the line.

The deaths led to an important finding: The cool-water bluefin apparently died of heart attacks after being exposed too long to the warmer Gulf surface water. Trapped on the longlines, they were unable to dive deeper to cool off. It was then that Miller and others realized the true threat that surface longline fishing poses to the species, particularly in the Gulf.

Now, NOAA Fisheries estimates the new measures will reduce the amount of incidental bluefin catch by at least 150,000 pounds nationwide each year—a 35 percent reduction from 2013 levels. And, according to Miller, the news could be even better, because the incidental catch might well be reduced even more.

Under the new measures, fishing boats using surface longlines will be required to keep all dead fish that meet the minimum legal size limit, and those dead fish will be counted against the new incidental bluefin catch cap. The fishing boats also must have video cameras on board to record what’s being caught and discarded.

This system will mean, I believe, that there will finally be an incentive to avoid catching bluefin. Miller, whose experience and vast knowledge of bluefin helped me and other conservationists push for a scientifically sound plan to save them from those longlines, agrees. As she points out, while “conservationists, scientists, and governments have worked really hard to rebuild bluefin tuna for decades,” market forces have pushed in the opposite direction: In Japan, where bluefin are prized for sushi and sashimi, a 300- to 500-pounder can fetch upwards of $10,000, depending upon the quality.

“So for everyone trying to help, there have been that many more people making a lot of money catching them. And that, unfortunately, has dictated how they’re managed.” 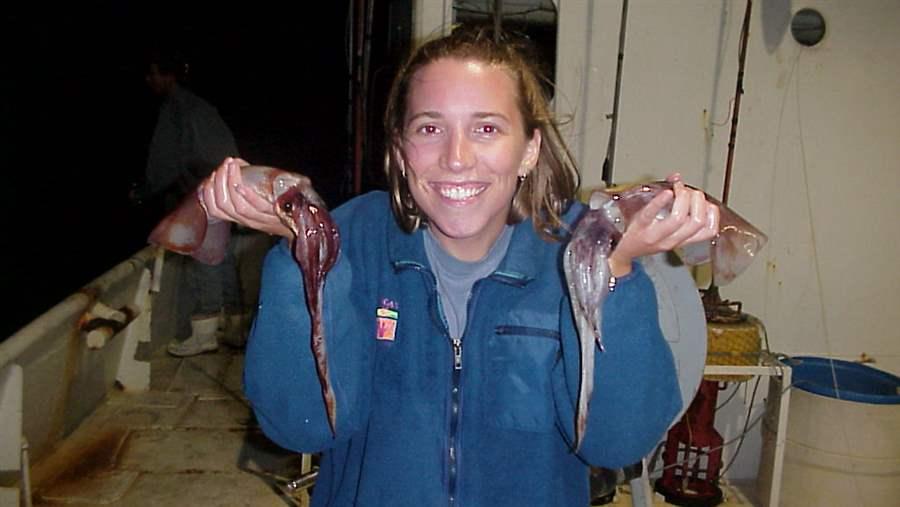 Shana Miller holds up squid, one of bluefin tuna’s favorite prey, during a research mission on a longline fishing vessel in the Gulf of Mexico.

But as happy as we are with the new fishing guidelines, she knows more needs to be done worldwide.

“If we can rebuild this species, it would be better for ocean ecosystems,” said Miller. “There would be more fish for recreational and commercial fishermen, who could make more money while their take would be sustainable,” she said. “If bluefin recover, it would give everyone working to help this fish a sense of hope for this amazing animal and for the future of all wildlife.”