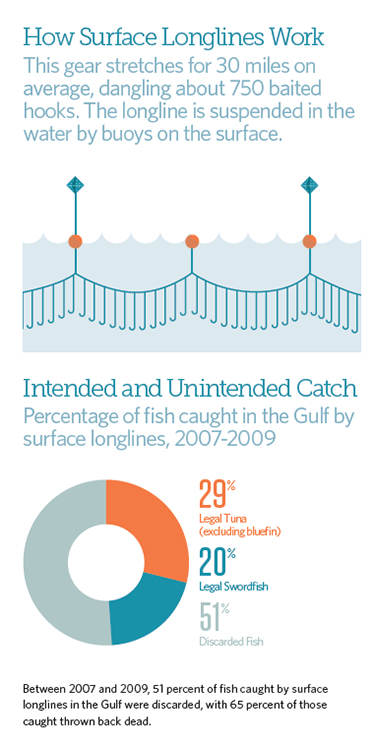 The use of surface longlines by commercial fishermen pursuing yellowfin tuna and swordfish in the Gulf of Mexico results in the incidental catching and killing of already depleted Atlantic bluefin tuna and other threatened ocean wildlife. Now, however, more selective commercial fishing gear is available: greenstick and swordfish buoy gear, both of which reduce this unwanted catch and provide alternatives to indiscriminate surface longline fishing.

A recently completed pilot program testing the new gear showed promising results in the Gulf. Researchers with the Florida-based Nova Southeastern University Oceanographic Center worked with greenstick and swordfish buoy gear from the spring of 2012 through the summer of 2013 to determine whether they are environmentally and economically viable alternatives to surface longlines. They found that the gear is highly effective in avoiding unintentional catch.

Greenstick gear consists of a 35- to 45-foot fiberglass pole that tows a 500- to 800-foot main line. The original poles were green in color, hence the name. Up to 10 artificial squid lures are individually attached to this main line and skipped across the surface of the water to attract yellowfin tuna. Once a fish is hooked, fishermen quickly bring it to the boat so that they can release any unintentional catch immediately while still alive. Because of the way the gear was developed, tuna accounts for the vast majority of greenstick catch.

Swordfish buoy gear consists of a single piece of heavy fishing line attached to one or two baited hooks on one end and a flotation device, or buoy, equipped with a light on the other end. Generally, one vessel will use 12 to 15 of these free-floating gears at a time. The buoys, which are deployed at dusk, are set in a straight line. When a fish takes the bait, it drags the buoy out of line, indicating that it has been hooked, so the fisherman can quickly retrieve the fish and make a decision to retain or release it.

Limiting unintentional catch is important to the marine food web in the Gulf of Mexico. The Gulf provides essential habitat for a variety of species, including western Atlantic bluefin tuna. The Gulf is their only known spawning ground. Depleted blue and white marlin and sailfish are also believed to spawn in these waters. In addition, endangered species such as leatherback sea turtles depend on the Gulf's rich offshore waters for food. Fishermen using surface longlines to catch yellowfin tuna and swordfish unintentionally catch approximately 80 species, including these animals.

This fishing gear consists of a main line averaging 30 miles long and connected to buoys that suspend approximately 750 baited hooks near the surface. The hooks often remain unattended in the water for up to 18 hours, resulting in high mortality of ocean wildlife.

Making matters worse, the 2010 Deepwater Horizon oil spill disaster, which contaminated important Gulf habitat with about 172 million gallons of oil and 1.8 million gallons of dispersants, caused injury to bluefin tuna and other marine wildlife. The alternative fishing gear could reduce this unintentional waste in the Gulf.

Researchers from the pilot program worked at sea for more than one year with four commercial fishing captains from Louisiana and Florida, including those using surface longlines, to install and use greenstick and swordfish buoy gear in the Gulf. Results indicate that the equipment could provide a solution to the decades- old problem posed by surface longlines. The new gear proved to be more effective at reducing unintentional catch, with target catch rates increasing on each successive trip.

These results suggest that fishermen can use the greenstick and swordfish buoy gear more efficiently over time. In addition, researchers observed no interactions with bluefin tuna, sea turtles, or marine mammals. If adopted in the Gulf when bluefin are at the peak of their spawning season, these selective fishing methods could provide significant environmental advantages and economic benefits for the region.

The success of the pilot program is good news for marine life and fishermen. Restoration funds from the 2010 Gulf oil spill are available and could be used to help surface longline fishermen make the transition to the selective gear, allowing them to avoid bluefin tuna, sea turtles, sharks, and other unintended catch while more efficiently targeting swordfish and other species of tuna. This fishing gear presents a real alternative that will benefit both bluefin tuna and the fishermen harmed by the Deepwater Horizon oil spill. 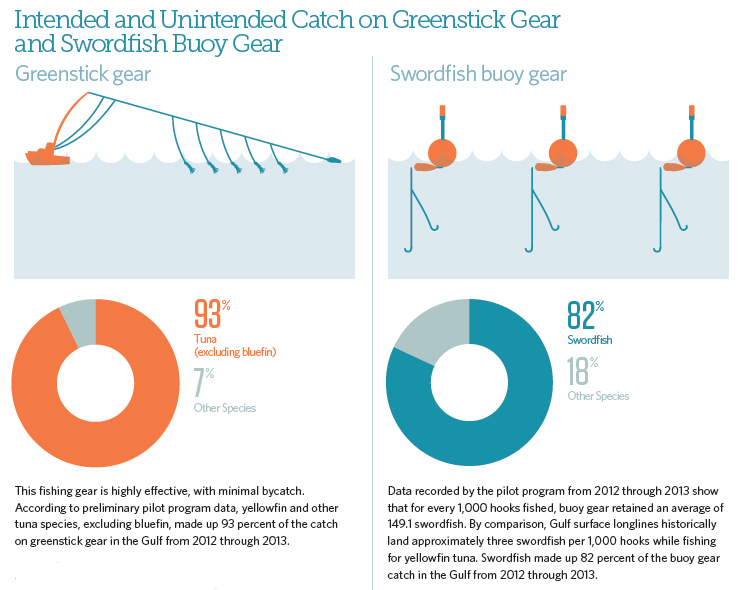 To view additional photos and citations, download the PDF above.