Delegations from nine nations and the European Union signed an agreement on Oct. 3 that prevents unregulated fishing in the high seas of the Central Arctic Ocean for at least 16 years unless science-based measures are established. The accord, which Pew supported, is the first proactive ecosystem-based approach to conservation in the Arctic Ocean. Steve Ganey, senior director of Pew’s land and seas program, spoke with former U.S. ambassador for oceans and fisheries David Balton, who led the negotiations that produced the agreement.

The Agreement to Prevent Unregulated High Seas Fisheries in the Central Arctic Ocean is a landmark step in marine conservation. Can you explain what it does and why it matters?

The agreement embodies two basic commitments by nine nations and the European Union. The first is not to authorize their vessels to engage in commercial fishing in the high seas of the Arctic Ocean until there is enough scientific information with which to manage those fisheries properly. The agreement covers 2.8 million square kilometers, an area roughly the size of the Mediterranean Sea. And while there never has been commercial fishing in this area, the melting of the Arctic ice cap has opened a part of this area to potential fishing for the first time. So that’s a major commitment.

The second commitment is to establish and operate a Joint Program of Scientific Research and Monitoring … to determine when commercial fishing might be viable and how best to manage such a fishery in the future.

An important part of the agreement is that it’s not just countries within the Arctic region that signed. Why did this diverse group of countries—from inside and outside the region—feel that this agreement was necessary?

As is often the case with international agreements, the underlying interests of the various players were not identical. For the five nations that border this high seas area—the United States, Canada, Greenland/Denmark, Norway, and Russia—a principal interest was to ensure that no high seas fishing would undermine the security of natural resources under their jurisdiction.

And for the countries outside the Arctic region, I think they are looking into the future and anticipating that there will someday, at least potentially, be a commercial fishery. By signing on to this agreement now, it guarantees them a seat at the table when a new agreement may be negotiated that could authorize commercial fishing on a sustainable basis.

I’d add one other thing: For some of the non-Arctic States, particularly the three Asian States and the European Union, they welcomed the opportunity to participate in an international agreement about the Arctic on an equal footing with Arctic countries. The other Arctic-specific agreements that have been negotiated to date have excluded them. This one included them. 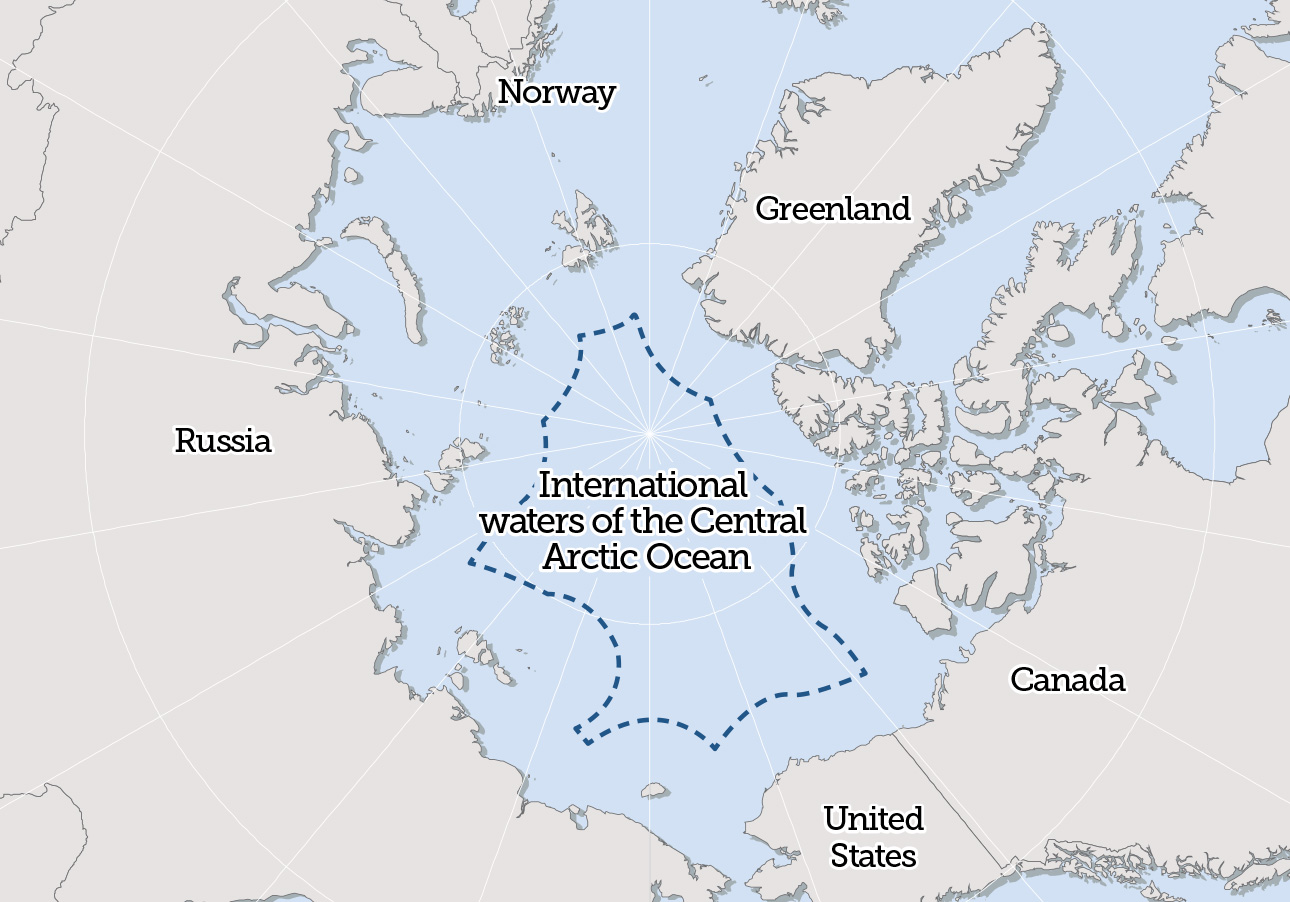 For many of us, the Arctic seems like a faraway place, but it’s a very special region. Can you describe why it’s unique and why this area deserves protection?

The Arctic is special because it is warming faster than probably any other part of the planet, more than twice as fast as the global average. And this is bringing about profound change.

The fisheries agreement is, of course, driven by this underlying change. But there are other changes afoot that already are causing serious problems for the people who live and work in the Arctic. The Arctic region is fascinating for a lot of reasons, but I would say the primary reason that it is receiving so much attention has to do with climate change.

This agreement asked that the commercial fishing industry wait for 16 years before starting to fish. What do you expect will happen during that time span?

I would first note that the 16-year period will begin only once the agreement enters into force, and that may actually take a little while. And another clarification is that that 16-year period can be extended in five-year increments, if the parties so agree. What will happen in the interim, primarily, is the establishment and operation of this Joint Program of Scientific Research and Monitoring. That’s the mission during this period.

What do you consider the most important things to get right in coordinating the science over the next 16 years?

There are a lot of things that we do need to get right. One reality is that there are limited resources for scientific research, generally, in the Arctic. And some of these governments, including the United States, have a difficult time in their own capitals putting aside or reserving money for Arctic fisheries research. There are other compelling needs. Particularly from a fishery science point of view, a lot of these governments, perhaps reasonably, may prefer to spend money studying ocean areas where there are already active fisheries.

Nevertheless, creating this joint program and housing it under the agreement will allow scientists from each of these countries to make a stronger case to fulfill the commitment to create and operate this program for the Arctic. So that’s one of the things to get right: making sure there are enough resources and attention devoted to doing the marine science work necessary to fulfill this commitment.

How much do you think countries are willing to invest to ensure that the necessary scientific research is conducted and followed?

In my experience, the signing and bringing into force of such an agreement helps to propel such investment forward. It focuses government’s attention at a higher level. And usually that means more resources will actually flow.

You’ve been around a lot of fishery negotiations over your career. How important are agreements like this? And how well do they work over the long term?

These deals are a little bit like snowflakes: No two are exactly alike. And this one is not typical. This is an agreement not to fish … in an area where there never has been commercial fishing. It’s unusual in that way. And so it’s a little difficult to predict, even based on the precedents, how effective it will be.

Nevertheless, my sense is that this one should work pretty well and probably better than some of the others because, as we sit here today, there’s no countervailing pressure to initiate commercial fisheries right away. There is space and time that have allowed the governments to agree to this pause and to actually undertake the scientific research necessary.

Do you think all parties will honor the agreement for its duration?

I do. The two commitments that I described embedded in this agreement are not all that hard to fulfill. Yes, countries need to come up with the resources necessary to conduct the joint program in a robust way. I think that will happen. I think this agreement will be honored and will succeed in the ways that negotiators hoped it would.

Is there anything else that you would like to mention about this?

This fisheries agreement for the central Arctic Ocean was not negotiated in a vacuum. There has been a lot of work in the last decade to try to strengthen various regimes of governance and to improve international cooperation about the Arctic. Through the Arctic Council process, there was an agreement to cooperate on search and rescue in the Arctic. That was in 2011.

Two years later, again in the council, members negotiated another treaty to cooperate on potential oil pollution in the Arctic. And then the third council agreement was to promote scientific research more generally in the region, not focused on the Arctic Ocean or fisheries in particular. Through the International Maritime Organization, governments have also established stronger rules relating to shipping in the Arctic and the Antarctic, the so-called Polar Shipping Code.

And it’s a really interesting question to me how, if at all, should these various efforts be coordinated. We don’t have an answer to that yet. But with all this activity underway, at least that is a reasonable question to ask. Is there more that we need to do to improve Arctic governance to create governance of the Arctic Ocean heading into the future? That will be a key question.