How the public views algorithms

The Pew Research Center released a report in November on public views of algorithms, finding that 58 percent of Americans say that computer programs will always reflect some level of human bias, although 40 percent think these programs can be designed in a way that is bias-free. In various contexts, the public worries that these tools might violate privacy, fail to capture the nuance of complex situations, or simply put the people they are evaluating in an unfair situation. Public perceptions of algorithmic decision-making are also often highly contextual. The survey shows that otherwise similar technologies can be viewed with support or suspicion depending on the circumstances or on the tasks they are assigned to do.

Where Americans find meaning in life

The Pew Research Center released a report in November analyzing findings from two separate surveys about where Americans find meaning in life. When asked in an open-ended question what makes life meaningful, Americans were most likely to mention family, and in a closed-ended question they were most likely to report that they find “a great deal” of meaning in spending time with family. Responding to the open-ended question, Americans mentioned a plethora of sources after family: One-third brought up their career or job, nearly a quarter mentioned finances or money, and 1 in 5 cited their religious faith, friendships, or various hobbies and activities. Additional topics that were commonly mentioned included being in good health, living in a nice place, creative activities, and learning or education. Many other topics also arose, such as doing good and belonging to a group or community.

How Americans Get News Now

The gap between the share of Americans who get news online and those who get it on television is narrowing, according to the Pew Research Center. 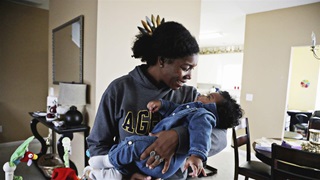