When You Say You Believe In God, What Do You Mean?

It seems a simple question: five words inviting a plain yes-or-no answer: "Do you believe in God?"

When You Say You Believe In God, What Do You Mean?

And yet year after year, the question still surfaces, not only in Gallup polls but in Harris and Barna Group polls, the Baylor Religion Survey, the American Religious Identification Survey, the General Social Survey, and many others.

"Just 27 percent of adults in Western Europe believe in the God described in the bible."

Now, after a decade of conducting its own wide-ranging, in-depth religious attitude surveys in the United States and abroad, the Pew Research Center recently concluded that the time had come for an expansive new approach to the age-old, and maybe not-so-simple, question of transcendent belief.

The result is two major surveys, published separately in the spring of 2018, that explore contemporary understandings of what it means when Americans and Western Europeans say they believe in God—or don’t.

“We wanted to dig deeper,” explains Greg Smith, associate director of religion research at the center, “which required a whole new set of questions. In the past, we asked people if they believed in God or a universal spirit. But this time we asked follow-up questions based on the way people responded.”

Pew’s domestic survey—“When Americans Say They Believe in God, What Do They Mean?”—found that although 9 in 10 Americans say they believe in a higher power, only a slim majority believe in the God of the Bible.

Pew’s massive Religious Landscape Surveys published in 2007 and 2014 had already shown that the share of Americans who believe in God with absolute certainty has trended downward in recent years to about 63 percent, while those voicing doubts about God’s existence has grown.

The survey of 4,729 adults, conducted online in December 2017 via Pew’s American Trends Panel, began by asking respondents, “Do you believe in God, or not?” Although 80 percent of respondents answered “yes,” subsequent questions revealed that just 56 percent believe in the divine being described in the Bible. Roughly a quarter (23 percent) of all the “yes” respondents said they believed instead in a “higher power or spiritual force.”

Self-identified believers were next asked whether their image of the divine was loving, all-knowing and/or all-powerful; whether they felt God had rewarded or punished them; whether they talk or pray to God; and whether they feel God talks to them. Still more questions correlated these responses with income, education, and religious and political affiliations.

“There are so many different ways to ask this interesting question about belief in God,” says Frank Newport, editor-in-chief of Gallup Inc. “Our core is still `Do you believe in God, question mark,’” although Gallup added “God or a universal spirit” to some of its polls in 1976.

What Newport says he appreciates about the Pew belief-in-God survey is that it “colored in the details of what people mean when they say they believe.”

“It’s interesting,” he says, “because belief in God is such a subjective area, and asking people to retrieve aspects of it from their brains is tricky. So I think it’s great they did this. It extends our understanding of religion in this country.”

“It’s one thing to see the growing number of ‘nones’” who identify with no religious denomination, says Zech. “It’s another thing to have your members not believing the very things you’re preaching. Quite honestly, this trend really caught me off-guard. This is brand-new information for me.”

Zech, the co-author of Catholic Parishes in the 21st Century, adds that the survey’s finding that highly educated Americans are the least likely to believe in God “has serious implications for the finances of religious institutions,” because churches have long relied on the wealthier and better-educated for their financial support.

Pew’s survey questions referencing the biblical deity did not cite any Scripture, leaving respondents to reference their own image or conception. But the great majority of Americans who believe in “God as described in the Bible” envision “an all-powerful, all-knowing, loving deity who determines most or all of what happens in their lives,” the survey found.

By contrast, the report noted, those who said they believe instead in a “higher power or spiritual force” are “much less likely to believe in a deity who is omnipotent, omniscient, benevolent and active in human affairs.”

Pew was motivated to “dig deeper” into the God question not by a sense that previous polls had fallen short, says Smith. Rather, “it was a matter of our wanting to know more.”

That curiosity had already impelled another belief-in-God survey that the Pew Research Center conducted across 15 Western European countries in mid-2017 as part of its large “Being Christian in Western Europe” study. The results were published in May, a month after the U.S. report.

With large pluralities of Western Europeans identifying themselves as either nonpracticing Christians or having no religious affiliation whatsoever, “we felt this was a good time to test out people’s nuanced concepts of God,” says Neha Sahgal, associate director of research at the center, who oversees international polling, particularly on topics related to interreligious relations.

With support from the John Templeton Foundation, the Pew Research Center had already studied Pentecostalism in 10 countries, the rise of Protestantism in Latin America, religious identity in the former Soviet Union, and Christianity’s modern interaction with Islam in Africa and—with funding from the Neubauer Family Foundation—had conducted a religious attitudes survey in Israel. The “Being Christian in Western Europe” survey, which included the belief-in-God poll, is Pew’s first religion study in that region.

All 15 nations surveyed are historically Christian, and nearly all claim Christian majorities. Yet the poll found that a median of just 27 percent of adults in Western Europe believe in the God described in the Bible.

And although 38 percent of Western Europeans said they believe in a “spiritual force or higher power,” another 26 percent said they held no belief in any divine being or higher power—2½ times the proportion of Americans who profess the same.

The survey also found that people in predominantly Catholic countries—especially Italy (46 percent), Ireland (39 percent), and Portugal (36 percent)—tend to have higher levels of belief in a biblical God than those in historically Protestant countries. “Still,” the report notes, “belief in the God of the Bible is lower in all of these countries than in the United States.”

The U.S. and European surveys asked the same questions, and both are nationally representative, according to Sahgal, who notes that the surveys differ chiefly in how they were administered. The U.S. poll was self-administered, while the European survey of 24,599 adults was conducted by telephone.

“There is some research to suggest that when respondents take surveys over the phone, they may temper their responses toward what they think is socially desirable, because they’re talking to another person,” she says. “So in the U.S. you may say you go to church when you don’t, because it’s thought you’re ‘supposed to.’ But in a secular culture, the socially desirable answer may be not being religious. So we have to be careful comparing the two surveys.”

The nuances of beliefs become sharper in an examination of the findings in the American survey. It found, for example, that nearly all of the respondents who believe in the biblical deity—97 percent—hold that God “loves all people regardless of their faults.” But a smaller percentage of those who believe in a spiritual force or power—69 percent—believe in a God who is loving without regard to fault.

By contrast, those who view God as a force or power, rather than as the God of the Bible, view the divinity as markedly more impersonal and less involved in their lives. Although 53 percent of them believe that God knows everything, just one-quarter believe that God determines what happens in their lives, and only 16 percent say that God talks to them.

There are further differences among U.S. respondents by denomination, age, and political affiliation. More than 90 percent of evangelicals and those in the historically black Protestant tradition say they believe in the God of the Bible, while 72 percent of mainline Protestants and 69 percent of Catholics do. Nine out of 10 people in the historically black Protestant tradition believe God to be all-loving, all-knowing, and all-powerful, whereas just 6 in 10 Catholics ascribe all three attributes to God.

Sixteen percent of Americans ages 18 to 29 say they believe in no God or higher power—more than double the proportion of those over 50. And Republicans are far more likely, at 70 percent, to believe in the God of the Bible than are Democrats, at 45 percent. Only one-third of white Democrats believe in the biblical God, and 21 percent do not believe in a higher power of any kind.

“The Pew data totally fits with the data we looked at,” says Baylor University sociologist Paul Froese, director of the Baylor Religion Surveys. He is co-author, with Christopher Bader, of the 2010 book America’s Four Gods: What We Say About God & What That Says About Us.

“When you ask somebody about God,” Froese says, “my thought is that you’re tapping into their deep sense of what is moral authority in the world.”

America’s Four Gods, which Pew’s belief-in-God report cites as a predecessor to its own survey, proposes that most Americans’ notions of God fit into four distinct categories.

There is, Froese and Bader argue, the Authoritative God, who is engaged in human affairs but punishes; Benevolent God, who rescues or provides alternatives in crises; Critical God, who does not intervene in human affairs but will judge us in the afterlife; and the unengaged Distant God, belief in whom is found more among the college-educated, who favor a more scientific view of how the world works.

Those who see the deity as an Authoritative God tend to believe that divine laws are immutable and must be obeyed, Froese says, while those who envision a Benevolent God “feel they can talk to Him and work things out.”

Froese says Pew’s multiple-question approach is useful in helping to understand people’s beliefs, because “when you push them [respondents] hard, things start to unwind. It gives you insight into their mental processes.”

And that, says Smith, is what the Pew Research Center’s religious surveys aspire to do: seek insights that “present good, nuanced information on complicated subjects—objective information that people of all kinds can use to better understand the world and the society in which they live.”

The Hollowing Out of Newsrooms
About Trust Magazine
As part of our mission to inform the public, Pew publishes Trust magazine four times a year...
Learn More
Media Contact
Felisa Klubes
Director, Communications
202.540.6460
Sign Up For Weekly Updates
Don’t miss our latest facts, findings, and survey results in The Rundown. 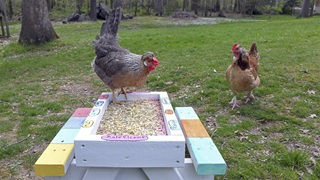