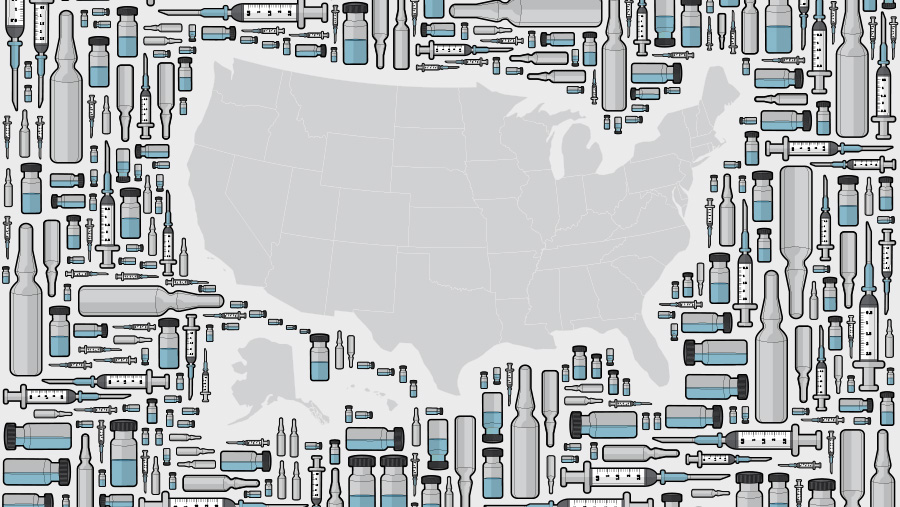 More than five years have passed since contaminated injections compounded at a single pharmacy caused 76 deaths and 778 illnesses in a nationwide outbreak of fungal meningitis, a tragedy that made clear that the complex, technical practice of drug compounding was not subject to a level of oversight appropriate to its potential risks to patients. Since then, state and federal officials have been re-examining the laws and regulations governing compounding, and working to strengthen them. Compounding is the creation of medications tailored to patients whose clinical needs cannot be met by U.S. Food and Drug Administration-approved products.

Compounded medications pose a higher level of risk to patients than FDA-approved drugs because they have not been tested for safety and efficacy, have not gone through an approval process, and are typically not made under the same quality standards as approved products are. The Pew Charitable Trusts’ drug safety project has identified more than 50 reported compounding errors or potential errors from 2001 to 2017 linked to 1,227 adverse events—undesirable experiences associated with the use of a medical product—including 99 deaths. And because many such events may go unreported, this number is likely to be an underestimation.

Scrutiny of compounding policies following the meningitis outbreak in 2012 brought to light weaknesses in state and federal oversight of these potentially risky drugs, prompting reforms at both levels. In November 2013, Congress passed and President Barack Obama signed into law the bipartisan Drug Quality and Security Act (DQSA), which established clear lines of oversight accountability for two categories of businesses that can compound drugs:

The vast majority of compounding is patient-specific; as such, it remained under states’ jurisdiction in the federal law. In response to both the outbreak and the subsequent federal law that clarified these regulatory responsibilities, many states also began developing strategies to strengthen their own drug compounding oversight.

As state officials were seeking to determine which reforms would help them oversee the industry most effectively, Pew convened an advisory committee of state pharmacy regulators and other experts to identify best practices (see the “Best Practices” section below), which were published in its 2016 report “Best Practices for State Oversight of Drug Compounding.”

In 2016 Pew also published the report “National Assessment of State Oversight of Sterile Drug Compounding,” an evaluation of the national landscape of state policies on compounding of sterile drugs, based on data collected in 2015. The current report provides a targeted update of the prior assessment, focusing on state alignment with three key best practices:

This assessment collected data from publicly available sources, which were then verified by the boards of pharmacy in 43 states and the District of Columbia, and through interviews with representatives from four randomly selected boards.

State officials have strengthened sterile compounding oversight laws and rules since the 2015 assessment. The vast majority of states now conform to best practices in two of the three key areas: 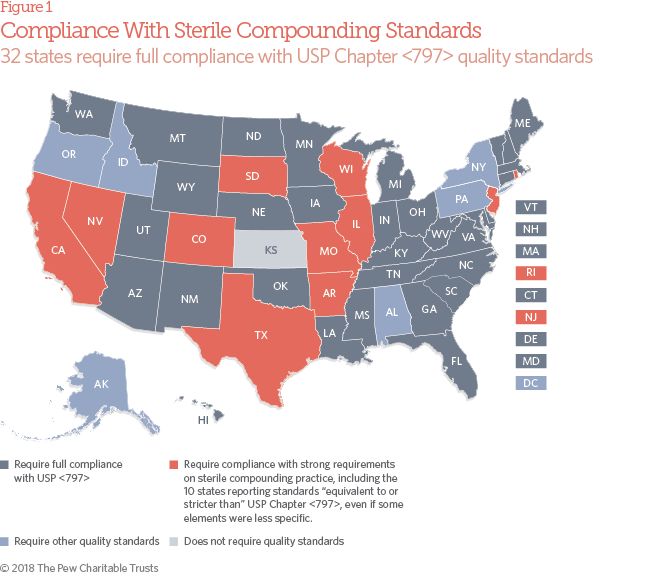 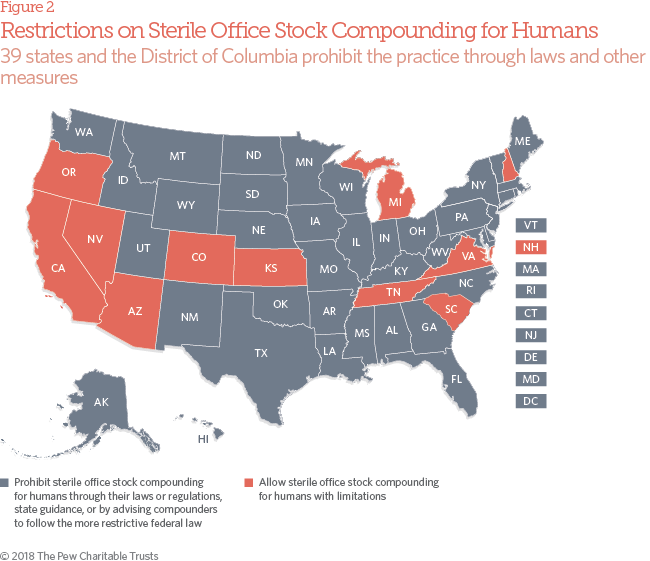 The significant progress in adopting USP Chapter quality standards and aligning with federal law on compounding without prescriptions suggests a key opportunity for jurisdictions that have not yet adopted these best practices. Improvements in rigor and frequency of inspection of facilities that perform sterile compounding will require resources, but interim measures such as harmonizing inspection forms and processes among states may allow for optimal use of existing capacity and enhance efficiencies.

While the majority of states have taken action to strengthen sterile compounding oversight policies since the outbreak, it is essential to follow through with strong implementation and enforcement of these laws and rules—including the federal DQSA. This report is intended to highlight the significant progress on public health policy that has occurred and to identify the most fruitful opportunities for action to help ensure a safe supply of compounded drugs. This remains a period of flux for drug compounding oversight: A number of states have pending policy changes, and implementation of the federal DQSA is ongoing. This continuing progress is one key finding of this study.

Key recommendations to ensure safer medications have been widely adopted

A new report finds that most states have taken steps to address the safety of prescription medicines created by pharmacies, known as compounded drugs.