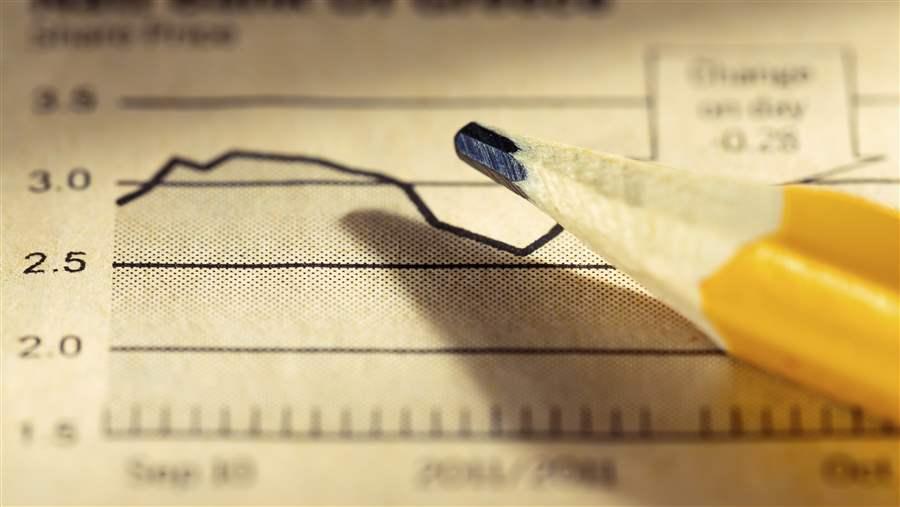 After Massachusetts lawmakers drew down the state’s budget stabilization fund in fiscal years 2013 through 2015 to cover higher spending, Standard & Poor’s (S&P) took action. The nation’s oldest credit rating agency announced in November 2015 that it had revised its outlook on the state’s finances from stable to negative and warned that it might also lower the state’s debt rating unless lawmakers replenished Massachusetts’ rainy day fund.

Governor Charlie Baker responded by asking lawmakers to approve a deposit of more than $200 million into the budget stabilization fund in the fiscal year that began July 1, 2016. In a statement, he said this action would “ensure we are saving money in good economic times to protect us from future economic downturns.” In a subsequent interview with The Pew Charitable Trusts, the governor said he thought the payment would alleviate S&P’s worry. “Their concern was that we weren’t going to make a deposit,” he said.

The step Gov. Baker took to placate Wall Street was not unique. States generally react to the warnings of S&P and similar agencies in order to protect or enhance their ratings. The higher a state’s credit rating, the lower the cost to repay bonds the state sells to investors to finance construction and renovation of roads, schools, airports, prisons, parks, water projects, and other infrastructure.

Yet research by Pew has found that even in states with the agencies’ highest rating (triple-A), policymakers often are unsure about how best to manage their rainy day funds to earn or keep high credit ratings. As a result, some state officials are reluctant to tap reserves even during recessions for fear of a ratings downgrade.

To offer policymakers advice and insight into the relationship between budget reserves and credit ratings decisions, Pew studied documents and data on state ratings from the three major rating agencies—S&P Global Ratings, Moody’s Investors Service, and Fitch Ratings—and interviewed policymakers, rating agency analysts, and others. The study is part of Pew’s ongoing look at how states are managing their finances since the Great Recession of 2007-09. In previous reports, beginning with Managing Uncertainty: How State Budgeting Can SmoothRevenue Volatility, Pew has offered recommendations on how policymakers can strengthen their state’s financial stability, including prudent design of rainy day funds.

While rainy day funds are one of several factors that inform ratings decisions, they are especially important because of the increasing volatility in state revenue. “Everyone has seen the same trend: Tax revenues have become increasingly volatile in the last one to two decades, and the cushion provided by rainy day funds helps offset that budget position,” said Gabriel Petek, a managing director in S&P’s public finance division, in an April 2016 interview with Pew.

Pew examined changes in credit ratings and the use of reserves in the 47 states that Pew classified as having a rainy day fund (all but Colorado, Illinois, and Montana). The research found that:

With that in mind, Pew recommends that state policymakers:

When to Use State Rainy Day Funds

When the Great Recession hit in 2008, it put enormous pressure on state budgets. Tax revenue dropped precipitously and mandatory costs&mdash;particularly for health and human services&mdash;rose. Delaware, for example, entered fiscal year 2010 facing a $750 million budget shortfall because of declining revenue from personal and corporate income taxes.