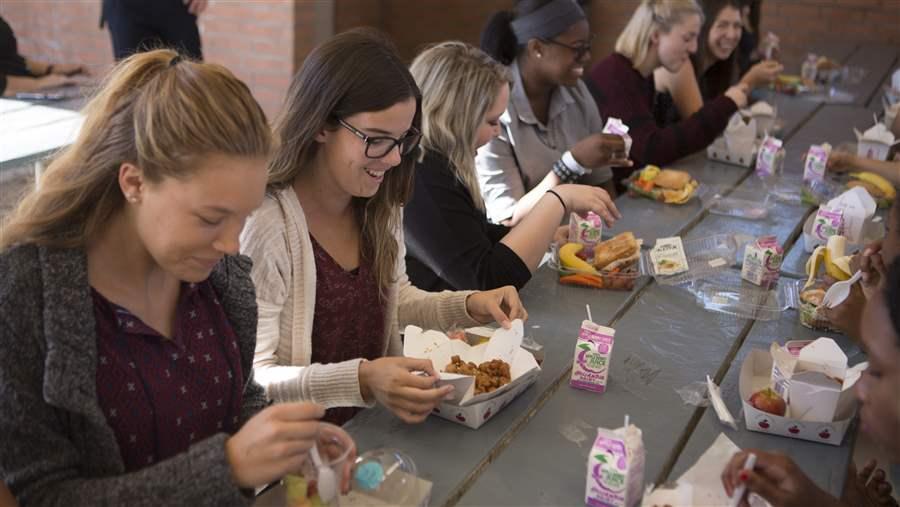 WASHINGTON—School food service directors are using a mix of strategies—three, on average—to encourage students to eat healthy meals and snacks, and many see few or no remaining challenges to implementing updated breakfast and lunch nutrition standards. The findings come from a new report from the Kids’ Safe and Healthful Foods Project, a collaboration between The Pew Charitable Trusts and the Robert Wood Johnson Foundation.

Based on a nationally representative survey of food service directors, the report, School Meal Programs Innovate to Improve Student Nutrition, sheds light on which approaches have been most effective during the multiyear transition to healthier food and drink standards issued by the U.S. Department of Agriculture since 2011. A panel of school nutrition professionals, whose programs are successfully serving healthy meals and snacks, reviewed the survey results and provided additional insights on effective approaches to implementing updated nutrition rules. The research finds that:

“Thousands of districts have emerged from this transition, and many more can see light at the end of the tunnel,” said Stephanie Scarmo, of the Kids’ Safe and Healthful Foods Project. “Successful meal programs have made continuous innovation and collaboration with students their guiding principles, and they’ve worked to improve not just cafeteria menus but what schoolchildren are taught about food, with help from principals, teachers, and parents.”

Food service directors reported uneven progress toward district-wide compliance with the Smart Snacks in School nutrition standards, which govern items sold in cafeteria a la carte lines, vending machines, snack bars, and at fundraisers. In 2013, the USDA issued an interim final Smart Snacks rule that districts were to implement by school year 2014-15. Two-thirds of respondents said that all food and beverages sold by their departments met the standards by the deadline. But only 2 in 10 reported that the same was true for products sold by other departments and school groups. The panel of nutrition professionals suggested that achieving full compliance with the rule would involve greater cooperation between school staff and state child nutrition agencies, as well as support from the broader education community.

“Change doesn’t happen overnight,” said Rodney Taylor, director of food and nutrition services for Fairfax County Public Schools in Virginia and a panel participant. “I always tell my staff: ‘Bug them nicely. Don’t go away. Don’t give up on an idea because this teacher or that parent said no.’ Success requires constantly asking, ‘How do we get better at what we do?’”

The Kids’ Safe and Healthful Foods Project provides nonpartisan analysis and evidence-based recommendations on policies that affect the safety and healthfulness of school foods. The project is a collaboration between The Pew Charitable Trusts and the Robert Wood Johnson Foundation. Learn more at www.healthyschoolfoodsnow.org.

School meal programs and the individuals who run them have come under intense scrutiny in recent years as they planned for and implemented the U.S. Department of Agriculture&rsquo;s healthier standards for foods and drinks offered to the nation&rsquo;s students. But it is not just breakfast and lunch menus that have changed; vending machine options, a la carte lines, food-based fundraising practices, and more are being improved to meet the updated school nutrition rules that began to take effect in the 2012-13 school year (SY).