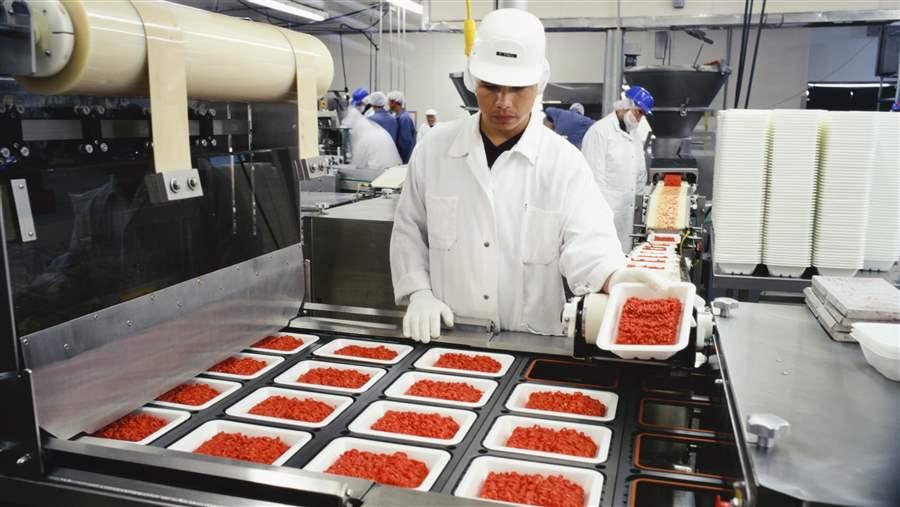 This food safety report, written by Pew and the Center for Science in the Public Interest (CSPI), highlights the need to modernize the meat and poultry inspection system in the United States to better protect consumers from the health risks posed by contaminated food.

Salmonella, E. coli, and other foodborne bacteria and viruses are nearly impossible to detect with the naked eye. Yet U.S. inspections still rely on methods developed a century ago, primarily visual examination of animals and carcasses.

Meat and Poultry Inspection 2.0 looks at the practices used by five countries and the European Union to better address the microscopic hazards that pose the greatest risks to public health. Pew and CSPI recommend that the United States find opportunities for improving meat and poultry inspection by commissioning comprehensive scientific assessments of its current approach and increasing the collection and analysis of data on food animals and production facilities.

The Centers for Disease Control and Prevention estimates that illnesses from contaminated food sicken 48 million Americans each year, resulting in 128,000 hospitalizations and 3,000 deaths.1 For the almost 9.4 million illnesses caused by known agents, outbreak data suggest that at least 22 percent of these illnesses (over 2 million cases) are associated with meat and poultry consumption.2 In addition, the cost of foodborne diseases associated with these products has been estimated to be almost $7 billion each year.3

The safety of meat and poultry is regulated by the United States Department of Agriculture.4 USDA inspectors are required by law to be present at all times during slaughter and to visit, on a daily basis, every meat and poultry processing plant engaged in interstate commerce in the United States.+ However, traditional slaughter inspection methods, which are based upon a system that is more than 100 years old, are not designed to detect most of the current microbial and chemical contaminants of public health importance.

In Meat and Poultry Inspection 2.0, The Pew Charitable Trusts and the Center for Science in the Public Interest (CSPI) examine the efforts and approaches undertaken by other countries as well as the European Food Safety Authority (EFSA) to modernize meat inspection. This review is intended to identify innovations that could offer improved protections for U.S. consumers.

This analysis of international practices and recommendations found that:

Based upon these findings, Pew and CSPI recommend that:

This report discusses the importance of meat and poultry inspection and how selected countries operate their inspection systems; provides an overview of recent reports by EFSA on meat and poultry inspection; and presents several innovations being used in different countries and regions to modernize existing inspection systems. While many of these innovations are relatively new and data have yet to be collected and analyzed to determine their impact on foodborne illnesses, they represent models with the potential to improve public health and better target regulatory resources.

+ USDA inspectors are present at all times in over 95% of slaughterhouses; however, there are a few exemptions to the federal inspection requirements. For example, those that slaughter animals for non-commercial uses are covered by an exemption for “custom” slaughter. Also, some states use state employees to conduct federal inspection of small and very small meat and poultry processors, with the costs for these inspections partially reimbursed by the federal government.