In September 2014, this report was updated to include revised data for Alabama, Florida, Illinois, Maine, Nevada, New Jersey, North Dakota, and Wisconsin, as well as affected national averages. Further, language was added to the report to clarify states’ total annual employee health plan expenditures. In 2013, states and their employees paid $30.7 billion to insure 2.7 million employee households. States paid $25.1 billion of this total.

This report provides a first-of-its kind analysis of the costs and characteristics of state employee health plans, and offers a nationwide benchmark against which states can be compared.

Collectively, states and their employees spent about $31 billion to insure 2.7 million employee households in 2013, a slight uptick in spending from 2011 and 2012 after adjusting for inflation. States paid $25 billion of this total. The average per-employee per-month premium for employees’ and dependents’ coverage was $959. States paid $805 (84 percent) of the total on average, and employees covered the remaining $154 (16 percent). However, this average masks sharp differences across the states, due to factors such as plan richness, average household size, provider price and physician practice patterns, as well as the age and health status of enrollees.

The report discusses each of these factors and finds that even after controlling for differences among states in average health plan richness and enrollee households size, a large range in premiums across the states remains. The report also reviews several policy approaches available to states to influence their costs.

In 2012, $865 billion was spent in the United States to insure 169 million people through employer-sponsored health insurance, which represented 31 percent of all health care spending. Public and private employers contributed $630 billion, or 73 percent, toward this total; employees picked up the difference.1 Employer sponsored insurance is a vital element of the American health care landscape, and an important component of employee compensation. It helps provide people with access to affordable care, protects workers and their families from unaffordable medical costs, and serves as a critical funding source for virtually every medical institution.

The cost of health insurance has become a leading budget driver for employers of all sizes and in all sectors. From 1992 to 2012, the average cost of insuring each employee and dependent doubled, after adjusting for inflation.2 This increase has led many employers—including states—to review the benefits they provide, benchmark their offerings to comparable employers, and seek ways to control costs.

Health insurance costs have become a significant portion of states’ overall health care spending, second only to Medicaid.3 Nevertheless, little has been known about how states’ employee health plans and costs compare with one another and with those of large, private sector employers.

To provide policymakers and other stakeholders with information on state employee health care expenditures, as well as the factors underlying this spending, researchers from the State Health Care Spending Project—a collaboration between The Pew Charitable Trusts and the John D. and Catherine T. MacArthur Foundation—worked with actuaries from Milliman Inc. to produce a first-of-its kind analysis of the costs and characteristics of state employee health plans.^ Although meaningful state-to-state comparisons are complicated by a number of factors, including who is covered (i.e., the number, age, and health of enrollees) and differences in health plan benefit design, this analysis offers a nationwide benchmark against which states can be compared.

How states manage their employee benefits—as well as other elements of their employee compensation package—affects their fiscal health; their ability to recruit and retain qualified staff to deliver critical public services; and their employees’ physical, mental, and financial well-being. In addition, as states try to reform the health care payment and delivery systems within their borders, how they structure the health insurance of their employees can serve as a model for other employers.

This report examines the project’s findings on state employee health care spending, explores the factors driving costs and states’ ability to influence these factors, and surveys a range of cost-containment strategies. These data and analysis offer important information as policymakers seek the best way to make their employee benefit systems effective, affordable, and sustainable. 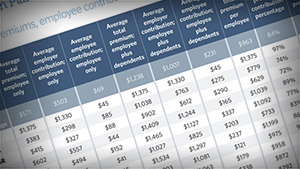 The average per-employee per-month premium for coverage of employees and dependents.

This report finds that state spending on prisoner health care increased from fiscal 2007 to 2011, but began trending downward from its peak in 2009.

Medicaid is the largest health insurance program in the United States, covering both acute and long-term care services for over 66 million low-income Americans—children and their parents, as well as elderly and disabled individuals. This report focuses on the impact of Medicaid on the states, including trends in spending and enrollment, and the anticipated effects of the Affordable Care Act.

State spending for health care services varies widely by state. But the relationship between the services delivered and residents' health status—how "healthy" people are—is complex. The amount a state spends on such services is not necessarily correlated with better or worse health status.