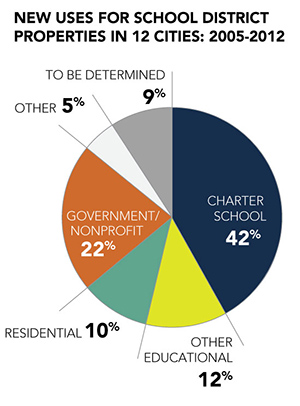 Large-scale public school closures have become a fact of life in many American cities, and that trend is not likely to stop now. Shuttered Public Schools: The Struggle to Bring Old Buildings New Life (PDF) looks at what happens to the buildings themselves, studying the experiences of Philadelphia and 11 other cities that have decommissioned large numbers of schools in recent years: Atlanta, Chicago, Cincinnati, Cleveland, Detroit, Kansas City, Mo., Milwaukee, Pittsburgh, St. Louis, Tulsa and Washington.

On December 13, 2012, Superintendent William R. Hite Jr. announced tentative plans to shutter 15 percent of Philadelphia's district-run schools, 37 in all, in what would be one of the nation's largest single-year closings. If those plans are adopted, even in pared-down form, the district will have a lengthy list of empty buildings on its hands, on top of those it already has.

The challenge of finding new uses for old buildings is daunting, and the downside of letting them sit idle can be significant. Since 2005, the 12 districts have sold, leased or reused a total of 267 properties and still have 301 unused sites on the market, empty buildings that can cast a pall over their neighborhoods and be costly to seal, maintain and insure. And the act of selling a vacant school building, even at a low price, does not guarantee successful reuse, only a change of ownership.

Some of the districts, including Washington and Cincinnati, have disposed of facilities with relative speed, while others have done less well; and Detroit has had to deal with far more closed schools than any of the others. The differences in performance are due in part to the nature of local real estate markets, the length of time buildings have been empty, and the impact of varying laws and policies that are still evolving.

View our previous study, Closing Public Schools in Philadelphia: Lessons from Six Urban Districts, which looked at a wide range of issues involved in the shuttering of buildings, including the impact on students.