Pew's 50-state report finds that most states are not doing enough to use a proven strategy for preventing tooth decay, unnecessarily driving up health care costs for families and taxpayers.

In both 2010 and 2011, the Pew Children's Dental Campaign released reports grading all 50 states and the District of Columbia on children's dental health, relying on eight evidence-based policies that cover prevention, financing, and workforce issues. However, this year, Pew's 50-state report focuses on prevention, examining states' efforts to improve access to sealants for low-income kids.

Pew's grades are based on four indicators that should be a key part of any state's prevention strategy:

In the map below, states were given specific points for each benchmark, and grades—on a scale of A to F—were based on the total points earned. Learn more about how each state performed in our state fact sheets. 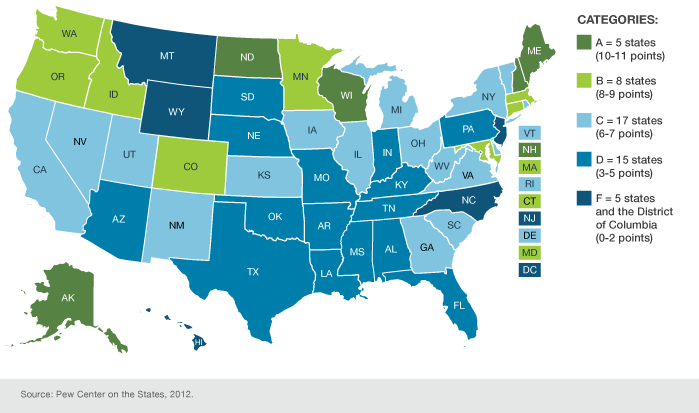 Pew's assessment reflects the states' policies that existed as of July 1, 2012.

Although a number of states are making progress, most of them have a great deal of work to do if they intend to make prevention a priority. Indeed, 40 percent of all states earned a grade of D or F on Pew's benchmarks: 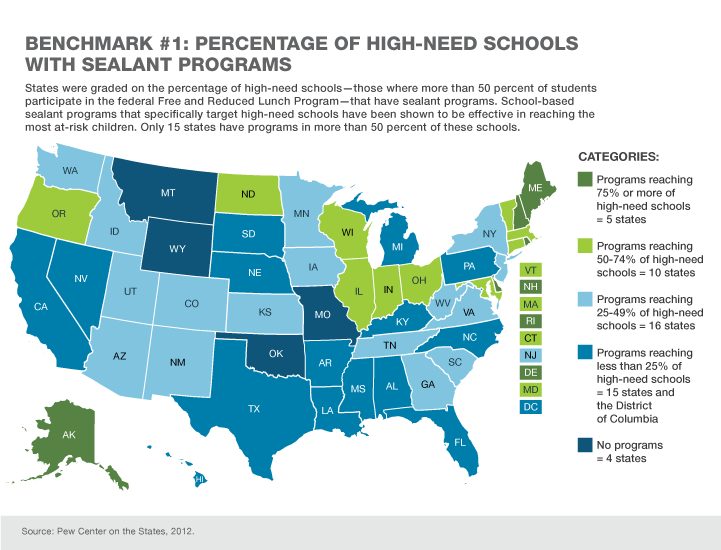 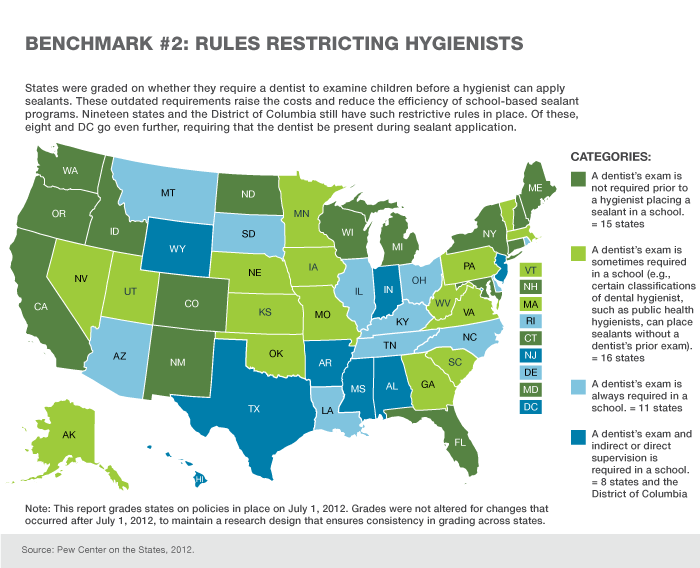 Dental sealants are clear plastic coatings that take only a few minutes to apply to the chewing surfaces of permanent molars, the most cavity-prone teeth.[i]The coatings act as a barrier against decay-causing bacteria.[ii]

Sealants can be placed following a visual assessment of the teeth to make sure they are not placed on any extensive decay.[iii]After the molars are cleaned and prepped, the sealant material is painted onto the enamel, where it bonds directly to the tooth and quickly hardens.[iv]

Usually, sealants are first placed on children's teeth while they are in the 2nd grade, shortly after their permanent molars appear.[v] In addition to protecting a healthy tooth, sealants also can prevent a cavity from forming when applied during the early stages of tooth decay.[vi]

The CDC and the American Dental Association's Council on Scientific Affairs have cited a number of studies that recognize sealants as one of the most effective preventive strategies.[vii] Schools are an ideal place to reach students at high risk for cavities. School-based sealant programs have been associated with reducing the incidence of tooth decay by an average of 60 percent.[viii]

In 2011 and 2012, Pew conducted surveys of both state dental directors and state dental boards. Additional data were gathered from the National Oral Health Surveillance System (NOHSS). States were given points for each benchmark, and grades were based on the sum of points earned for the four benchmarks. Though data for 2011 were collected, points and grades were awarded only for 2012 data. We graded states on an A to F scale:

State dental directors were asked for the percentage of high-need schools with sealant programs. States used a variety of sources to estimate the percentage of these schools with school-based sealant programs, including regularly updated databases and staff estimates. In general, states defined high-need schools as those in which more than 50 percent of students participate in the federal Free and Reduced Lunch Program; a few states had slightly different definitions. Low-income children have been shown to have a greater risk of tooth decay.[i] School-based sealant programs that specifically target high-need schools have been shown to be effective in reaching these children.[ii] Respondents were asked which of the following categories accurately described their state's status:

State dental directors and dental regulatory boards were surveyed regarding the ability of hygienists to apply sealants without a dentist's prior exam in schools as of July 1, 2011, and then were re-surveyed to determine regulations as of July 1, 2012. Pew staff resolved discordant responses through a review of hygienist rules and discussions with both dental directors and dental boards. If changes were made to regulations since the 2011 Pew survey, respondents were asked to place their states into one of the following four categories:

It is worth noting that in some states without a prior-exam restriction, other rules may exist that can complicate the logistics of operating school-based sealant programs.

Benchmark #3: Collecting and Submitting Data to the NOHSS

States' submission of sealant data to the NOHSS was assessed using publicly available data from the Centers for Disease Control and Prevention (CDC).[v] If states submitted those data, Pew assessed if CDC reported data that were too outdated (older than the 2006–2007 school year) to use for planning programs and strategies. Both the CDC and the Association of State and Territorial Dental Directors (ASTDD) advise states to provide data that are not older than five years.[vi]

One measure reported in NOHSS is the percentage of 3rd grade children with sealants. The federal Healthy People 2010 objective for sealants is that 50 percent of children in this age range should have sealants. This objective also seeks to close any disparities in sealant rates among kids, including disparities that occur by income levels.[vii]

States were given 1 point if they had recent data (2006–2007 school year or newer) that showed them having over 50 percent of 3rd graders with sealants. Pew was unable to ascertain from the data reported to NOHSS the prevalence of sealants among low-income children, so is unable to give additional credit to states that may have reached this very important goal. States received 0 points if they had no recent data or no data indicating they met the Healthy People 2010 objective.

Midlevel dental providers perform preventive care and routine restorative duties, such as filling cavities, in a variety of settings. Eight dentists share their perspectives on these practitioners, who are similar to physician&rsquo;s assistants or nurse practitioners in the medical field.