To date, there are no publicly available estimates of the number of drifting fish aggregating devices (FADs) deployed by industrial tuna fisheries. Despite the ecological consequences of unmanaged FAD use, no transparent systems are in place to regulate the deployment and tracking of this gear, which catches almost one-half of the world's tuna. 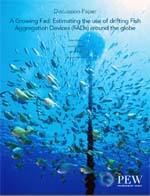 The Pew Environment Group took on the task of developing a ‘back of the envelope' estimate of how many drifting FADs are currently in use, while acknowledging that it would be a challenging exercise and the results both imperfect and preliminary. Collating data gathered using three separate methodologies, we were able to conclude that the number of drifting FADs put into the oceans each year ranges from 47,000–105,000. While much of the data needed in order to develop a more accurate estimate exist, they are currently considered proprietary by the fishing industry and thus confidential. As a result, some of the information used to estimate the extent of FAD use was obtained through informal conversations and industry consultants.

Although these estimates are imperfect, what is clear is that even the lowest end of the range, at 47,000 FADs per year, is a stark indicator that greater transparency and regulation of this fishing gear are essential. This is even more compelling when one considers that this estimate does not include drifting FADs already in the ocean, as some can last for several years.

FAD use affects ecosystems, including associated and dependent species, adds to marine debris, and has already played a role in driving two populations of bigeye tuna into the 'overfishing' category.

Our aim in undertaking this analysis was to initiate a conversation with all stakeholders about the scale of use of drifting FADs and the need to better monitor and regulate this fishing gear. With more and improved data our understanding of the true extent of fishing effort can grow, science and stock assessment improve, and, ultimately, decision makers can adopt more sustainable management measures. This better understanding will also help in the clamp down on illegal fishing and illicit practices.

The bottom line is that whether there are 47,000, 105,000, or even more FADs deployed each year, they can no longer be willingly ignored. FAD use affects ecosystems, including associated and dependent species, adds to marine debris, and has already played a role in driving two populations of bigeye tuna into the 'overfishing' category.

The Pew Environment Group has conducted this first estimate, but it is now up to industry, RFMOs and other stakeholders to provide the full picture on FAD deployment by stepping up and sharing their information. If the multi-billion-dollar global tuna industry is serious about sustainable fisheries management for the long term, it must work with all interested sectors on the regulation and management of FADs.